Tevin Coleman is a very athletic running back. His top end speed is fantastic, as he is able to hit a second gear and explode through the secondary. When he has a crease, he is a legitimate threat to take any run to the house.

Coleman shows good burst through the hole and has quick enough feet to make some defenders miss in the open field. He isn’t going to make devastating, ankle-breaking cuts, but he does enough to get the job done. Coleman runs with a high pad level, so his balance is average if he gets hit low.

Coleman was elected as a team captain this past season, and he reportedly has a great work ethic. He's a feisty runner and he loves to finish runs with a bang. He does not avoid contact by any means. He does a good job of falling forward at the end of runs.

Normally covers the ball well, but he will occasionally let it get away from his body as he goes to the ground. Coleman shows the willingness to step up in pass protection, even though his technique is questionable. Coleman is a real competitor, and someone who NFL teams will want in their locker room.

Cutback lanes are never safe when Coleman is running the ball. He is a north/south runner that looks to exploit cutback lanes and creases. His vision behind the line is decent, but he runs into the backs of his own linemen every now and again.

He will also miss the occasional opportunity to bounce a run outside, instead opting to run into a big pile in the middle of the field. He knows his assignment in pass protection. Coleman has a good overall feel for running the ball, as he knows when he can beat his man to the corner and when he needs to make an early cut to dart up the field.

Coleman possesses great lower body explosiveness, which helps him break through arm tackles with ease. Because he runs with a higher pad level, he does not run over too many defenders.

Tevin Coleman displays the ability to lower his shoulder and pick up a much-needed extra yard or two at the end of runs. He is a one-cut, north/south runner that is gone as soon as he makes his cut to go up-field. Defenders can bring down Coleman by hitting him low, due to his running style.

Tevin Coleman is a talented running back, all around. He's an explosive athlete and a real threat to score on every touch. He makes defenders miss often enough to not take many big hits, which should prolong his career, but his straight-line speed is probably his best attribute.

His pad level is the biggest concern when he runs the ball. Despite standing at 5’11, he does not consistently get his pads down when running between the tackles.

In the passing game, Coleman is solid enough to warrant three-down back status. His hands are small and a bit inconsistent, but he is a decent check-down option. He is still raw in his route running, but that is something that can be coached up.

Again, he can be dangerous with daylight ahead of him, so he can be a weapon in the screen game. He has the willingness and lower body strength to succeed in pass protection. His technique needs to be coached up, but as long as running backs have the size and willingness, they can succeed as blockers.

All in all, Coleman is an interesting running back.

Physically, he looks the part. It seems like he is good for at least one huge run every game. Unfortunately, it seems like he gets his yards in bunches, though. In other words, he has a lot of 2-3 yard runs, followed by a 40-yard explosion later in the game.

Part of why this happens is that he runs with a high pad level between the tackles, so he doesn’t bounce off many would-be tacklers. Having said that, he has shown the ability to lower his shoulder and gain the extra yards when he really needs them.

When I compare Coleman to the former Arkansas duo, I don't mean that in a bad way. It's important to remember that these comparisons are not career projections; rather, they are a blend of playing style and traits. So when I see Coleman run, I see a combination of Darren McFadden and Felix Jones.

This is in large part to running with a high pad level, but also having the explosive qualities that allow him to run for a huge gain at any moment. I have seen a lot of people compare Coleman to DeMarco Murray, but I personally don’t really see it. However, I do still believe that Coleman would be a solid fit in this Dallas offense, just as I believe that McFadden has the skill set to succeed in Dallas.

This offensive line will be able to create creases for Coleman, and he is at his best when he can read the defense, find the hole, and cut up-field for a big gain. He may not bring the consistent boom that Murray did, but he adds a home run element that the Cowboys could really use.

Jared is a born and raised Cowboys fan with an affinity for the NFL Draft. He has been a freelance scout since 2011, and hopes to work in a front office someday. 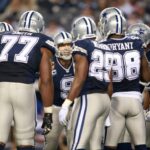