In need of QB depth with four days before their first preseason game of 2017, the Dallas Cowboys signed veteran backup quarterback Luke McCown and waived the injured Zac Dysert.

McCown did not appear in a game in 2016 as a Saint, his third year backing up Drew Brees and fifth team overall after being drafted by the Browns in 2004.

Winding the clock back to 2015 though – to McCown's lone start against the formidable Carolina Panthers – there is a legitimate chance the Cowboys not only added their experienced camp arm but a candidate for the primary backup QB spot  behind Dak Prescott this season.

Here is what I saw from Luke McCown on the tape.

McCown kept the Saints in this game against the Panthers by doing what any backup QB should be expected to – stay within the offense and execute a game plan.

Setting himself up in the pocket to deliver passes with touch and accuracy was not a problem for McCown, almost to a fault at certain times as I would have liked to see him climb the pocket more and generate more zip on the ball.

Even still, McCown overcomes both velocity issues and a lengthy throwing motion to get through his progressions and consistently hit receivers in stride.

The short and intermediate game is where McCown will settle nicely into Scott Linehan's offense, as he'll hit his targets out of breaks with a sharp pre-snap understanding of the defense in front of him.

When asked to push the ball down the field, McCown expectedly was short on a few shots, but more times than not completed the ball to all fields with the slight movement skills in the pocket to create throwing lanes and set his feet.

This final throw that I'll show here from McCown is an example of the good and bad that you live with in your backup signal caller. The mechanics and setup are far from perfect, but Luke completes a deep out route to move the chains against tight coverage.

These are simply not plays that penciled-in backup Kellen Moore has made with the Cowboys in his opportunities that will continue into this five game preseason for Dallas. What will help Moore is that McCown's best backup play remains from 2015, meaning he is two years removed from meaningful reps.

With the accuracy, mobility, and mental edge to back up Dak Prescott, I expect McCown to push Moore significantly over the coming weeks until the team must decide which to keep – not expected to carry three quarterbacks with depth better applied elsewhere on the Cowboys' roster.

First. And since I’m the first, let me be the first to say that I am extremely excited about this.

That last throw is what I needed to see to be excited. The deep out route is what can earn McCown this job.

Moore is limited as well downfield, but also doesn’t have much experience to help a team should somethin unfortunate happen.

McCown will have a learning curve to catchup in the playbook, but he’s the backup I’ve been hoping for them to sign this offseason. If Sean Payton is comfortable enough to let you be the backup to Drew Brees for three years, that’s good enough for me.

Thanks as always for reading, John. The last point here about Payton is spot on when it comes to McCown. There’s a trust he’s clearly built with coaches that goes beyond the physical elements of playing QB – the mindset that is so important in backup quarterbacks. Luke can do nothing but help this QB room just as Sanchez did last year, and some of the skills are there to at least give this offense a chance without #4.

Absolutely. With as much as the Saints love to throw the ball around, you need to have a backup that can step in and execute the game plan and provide as seamless a transition as possible. McCown isn’t Drew Brees, but trust plays a huge role in putting any player on the field. This is why Lucky is no longer with us. The team lost faith in him.

Kellen Moore not having much experience is probably not much of a problem. S Linehan has called him a veteran. S Linehan has said he doesn’t need many reps since he knows exactly what to do. Since he has been playing QB since he could walk his dad was a coach and he was totally absorbed studying, practicing and playing QB relentlessly, I think his total experience is way beyond anyone in the NFL that has only played in three season games.

A veteran equals not a rookie. Anyone with 1 year or more is considered a veteran.

Playing instinctively is good, but you also have to have the talent to do so. I have good instincts for Goalie in Lacrosse, but I’m not good enough to play at the professional level.

It’s great that he’s been studying and playing quarterback all of his life, but you also have to have the arm talent to play the position. When it is all said and done, Kellen Moore will likely make a great coach in College or the NFL, but as a player, not so much.

Dream on Sean. You continue to under estimate Kellen Moore and don’t know a lot about K Moore’s skills/abilities. Quit judging him by the fact he looks like the equipment manager or an administrator on the team rather than an NFL QB. Start judging him by what S Linehan says. K Moore is the 2nd team QB for 2017, period. He will get the 2nd team reps and 2nd team preseason play. In order for him to lose this position he is going to have to start screwing up. This is not likely. He should be very ready at this point and this is his only opportunity to shine. I expect him to play well in preseason games and shut up his critics.

McCown will have to learn the Dallas offense/playbook/game plans/Linehan thinking/receivers strengths and weaknesses/etc. It will take him some time. He will get the 3rd or 4th team reps and 3rd or 4th team preseason playing time. Most likely the earliest he would be able to be considered for 2nd team backup would be sometime during the regular season. So explain to me why the Dallas coaches would decide during the season to move McCown ahead of K Moore? The only thing I can think of is if Prescott got hurt and K Moore started at QB and kept screwing up. K Moore is not likely to lose the 2nd team QB position sitting on the bench. The earliest we are likely to see McCown at 2nd team if he turns out to be really good is most likely in 2018. IMO he will have to be really good to pass K Moore.

K Moore is a master at pocket passing but with serious physical limitations. I had some doubts myself until one of the top QB experts in the world if not THE top QB expert ( i.e. Scott Linehan) says he can play in the NFL and that his arm is strong enough. He also said he compensate for his physical limitations with his outstanding pocket passing skills/abilities to get the job done. He also said he knows his limitations and does not try to make throws his arm will not allow him to. He recently described him as a machine. K Moore’s college coach (i.e. C Peterson) said and I quote, ” K Moore IS THE BEST POCKET PASSER I HAVE EVER SEEN.”

I expect K.Moore to crumble and falter, this guy already proved he don’t belong, I seen enough in 2015 and im convinced L.McCown will beat him out even though I wish the cowboys would get rid of both of them and sign Michael Vick.

K Moore is the designated 2nd team QB so there won’t be any competition unless K Moore screws up big time and doesn’t play well overall. Therefore McCown will not likely get any chance at all at 2nd team QB. Unless Dallas keeps three QBs on the 53 man roster, McCown will likely be gone by the end of preseason.

In 2015 when K Moore was playing for two and one half games, he was new to the Dallas offense/playbook, had never played against first team defense and had limited reps to get ready to play. S Linehan considering all the circumstances thought K Moore played well overall but did admit he made too many mistakes. I think you will see a big improvement in 2017 preseason as K Moore should be more than ready now and has a lot to prove. He is also known for not making mistakes or throwing interceptions so he is likely to clean this up. 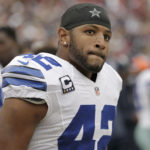 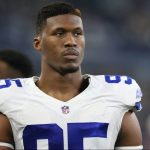