With concerns about a 20 point loss in Atlanta starting a stretch of six games without Ezekiel Elliott impacting the team's confidence, the Cowboys came out inspired through the first half against the NFC East leading Eagles. Proving to be outmatched badly in the second half though, 30 consecutive Eagles points saw Philadelphia all but clinch the division at AT&T Stadium last night with a 37-9 victory.

To perhaps only make matters worse, the banged up Cowboys must attempt to again save a sinking season on Thanksgiving – with the Chargers coming to town on Thursday.

Before we can focus on them, here are my immediate thoughts on a few things concerning the Cowboys' performance against the now 9-1 Eagles. 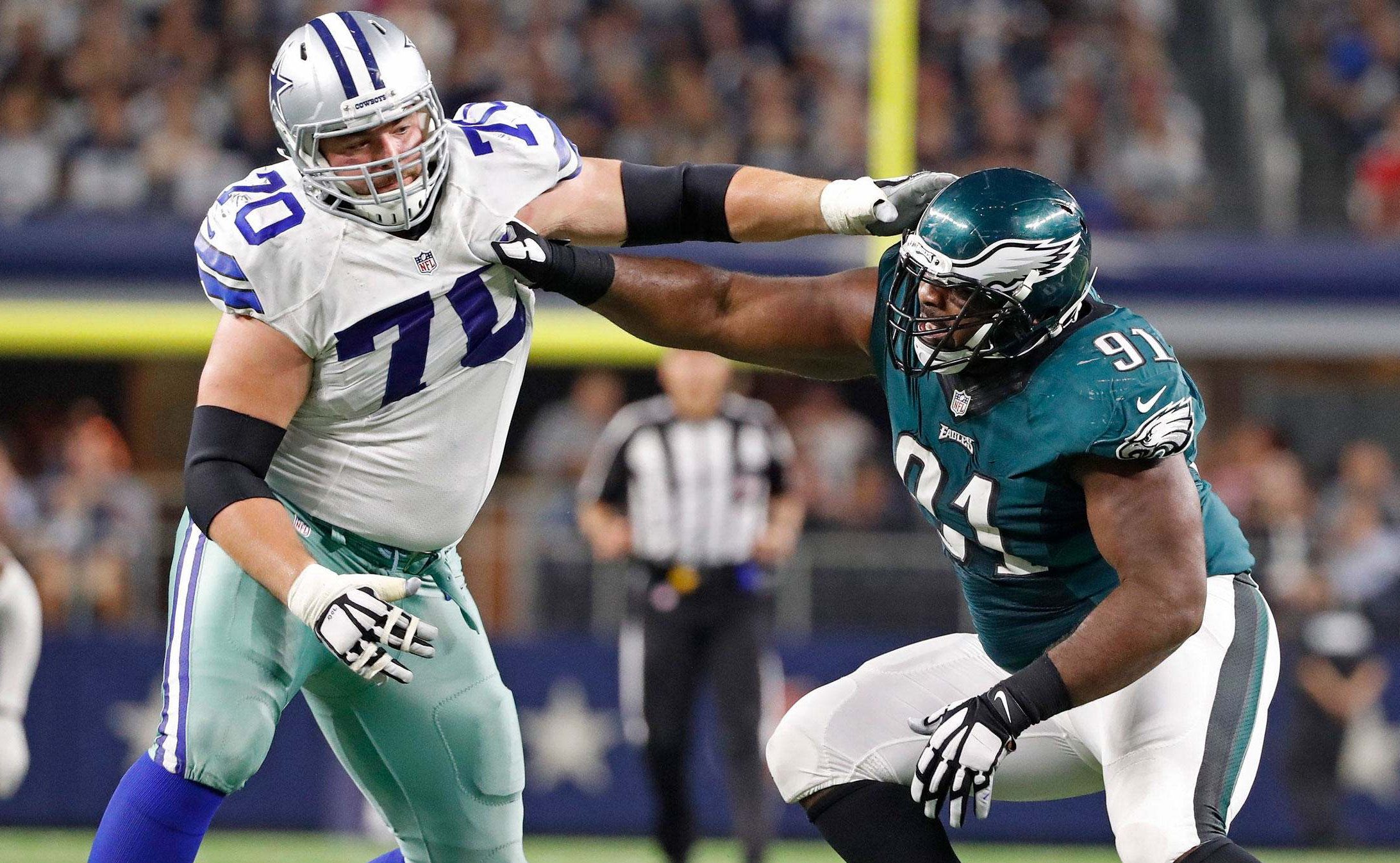 With the second half playing out the way it did, it sure would have been nice to see Prescott's receivers help him out more early on to further set the tone as Dallas built their small lead.

With that said, I thought Linehan did his job in lining up these guys to give them a chance–particularly Dez Bryant. It would have been easy for Bryant to get taken out of this game from the start with a few missed throws and calls that didn't go his way, but his continued work out of the slot and over the middle allowed for a few plays that gave the Cowboys hope.

There was a third down throw to Bryant that would have extended a huge drive in the second quarter, where it appeared he could have caught the pass facing Prescott with space to work up the field. Pressure allowed by Byron Bell at LT forced Dak to reset his feet and Bryant released down the sideline. It forced a tough throw to the boundary that went incomplete as the safety help arrived.

Plays like these summed up a night of poor execution for the Cowboys.

Bell's best football over his career has come at guard, and he was able to utilize some similar traits to control rushers with his power while not allowing them to work within his frame. Bell's biggest struggles came when dealing with speed off of the edge, although he did his best to frequently steer these rushers behind the pocket.

Unfortunately, it felt like Dak Prescott was uncomfortable, at times, knowing defenders could be pressuring him from behind.

Dak wanted to do everything he could to hang in the pocket and throw instead of exploiting these abandoned rush lanes and make more plays with his feet. Even with this considered, Byron Bell – or the absence of Tyron Smith – was not the reason you lost this football game if you're the Cowboys.

The Eagles understood very well that David Irving is a force to be dealt with on the interior, and they were able to scheme his strengths into a weakness the Cowboys never adjusted to in this game. I've written previously about how 1T DT Maliek Collins is unique in his ability to penetrate up the field and still be effective, and the same applies to the disruptive Irving.

The Eagles were able to open up gaps that cleared their bruising RBs to the second level with ease by sealing Irving off of the ball, catching him in the trap game with his length and burst.

Also of note: it was Richard Ash and Lewis Neal, two players with relatively limited range, lined up together at DT on Jay Ajayi's backbreaking 71 yard rush.

The things that came so naturally and consistently for him at Notre Dame have been struggles for him in the NFL as he continues to improve from his injury. Against the Eagles here, the short-range burst, hand strength, change of direction ability, and overall tackling skills were there for Smith – who may need to be relied on even more with Anthony Hitchens exiting this game with a groin injury and a short week.

Being able to play with confidence is everything for CBs in the NFL, and Brown has none right now. He's struggled to react to plays in time to use his pure speed and length to disrupt passes.

Getting pushed off-balanced, turned around, and thrown at the top of routes, Brown is a liability in coverage right now. This Cowboys team has so many other young starters around him in the back-end. Dallas was banking on Brown being able to take another step with his game in 2017, but instead he's cost them huge plays and is being targeted every time an opposing offense needs a favorable matchup to exploit.

The Cowboys' focus–if they hope to play more than 16 games on this draining season–is all but turned towards an NFC Wild Card berth now, sitting four games behind with six to play in the NFC East.

Losers of two straight, the Cowboys will not have much time to get healthy nor correct their wrongdoings from Sunday Night Football as the Chargers come in on Thursday. Failing to put together four full quarters of football through much of this season, the Cowboys are just hours away from lining up for four more quarters that will truly define this 2017 campaign.

I'll be back with Sean's Scout then, along with more on the implications of this loss and further thoughts on the Chargers throughout the week, right here at Inside The Star.