The Dallas Cowboys have now appeared on prime time twice this season, coming out victorious both times with an opening night win against the rival Giants and a Monday Night Football win in Arizona last night. Putting the ugly 42-17 loss in Denver behind them with their efforts on both sides of the ball against the Cardinals, there was plenty to love about the way the Cowboys responded from another slow start to escape at 2-1 returning home.

In this latest post game edition of Sean’s Scout, we’ll break down some of the things that stood out to me watching the Cowboys beat the Cardinals 28-17.

Here’s the TD catch from Carson Palmer to Jaron Brown to put the #Cardinals up 7-0 over the #DallasCowboys! #BeRedSeeRed pic.twitter.com/emXWLY0Wgd 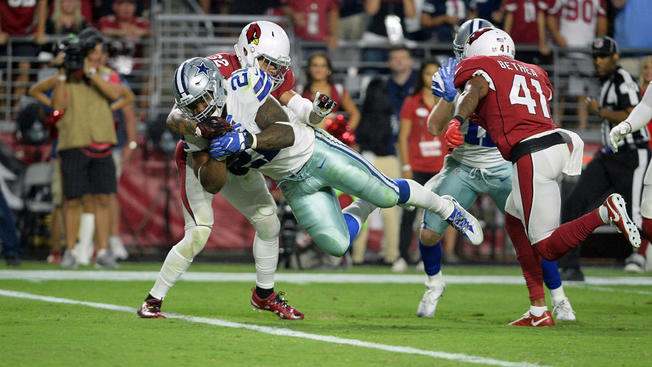 The Cowboys are back on track with this win against the Cardinals, setting up a meeting of 2-1 teams at AT&T Stadium this Sunday when the LA Rams come to town. The Rams, resting off of Thursday win at the 49ers, will be ready to spoil any momentum the Cowboys hope to take out of Arizona into the next month of the season.

As we review the tape of the Cowboys’ full performance against the Cardinals and look ahead to the Rams, be sure to look for new additions of Sean’s Scout!

Tell us what you think about “Sean’s Scout: Offense Finds Stride, Pass Rush Flourishes In Win Over Cardinals” in the comments below. You can also email me at Sean.Martin@InsideTheStar.com, or Tweet to me at @SeanMartinNFL!