Sean’s Scout: Running Back Usage, Strength In Secondary Stand Out At Raiders

You hear all the time that football is a game of inches, but I've never seen a game with two seasons on the line for both teams come down to index cards and late fumbles. This was the case as the Dallas Cowboys visited the Oakland Raiders for a game played with a playoff atmosphere in hostile territory for the Cowboys last night.

Coming away with a thrilling 20-17 victory, the 8-6 Cowboys kept their playoff hopes alive heading into a week 16 game that will see Ezekiel Elliott return to face the Seahawks at AT&T Stadium. With things now looking up for the Cowboys, here are a few of my notes on the good and the bad from this memorable game. 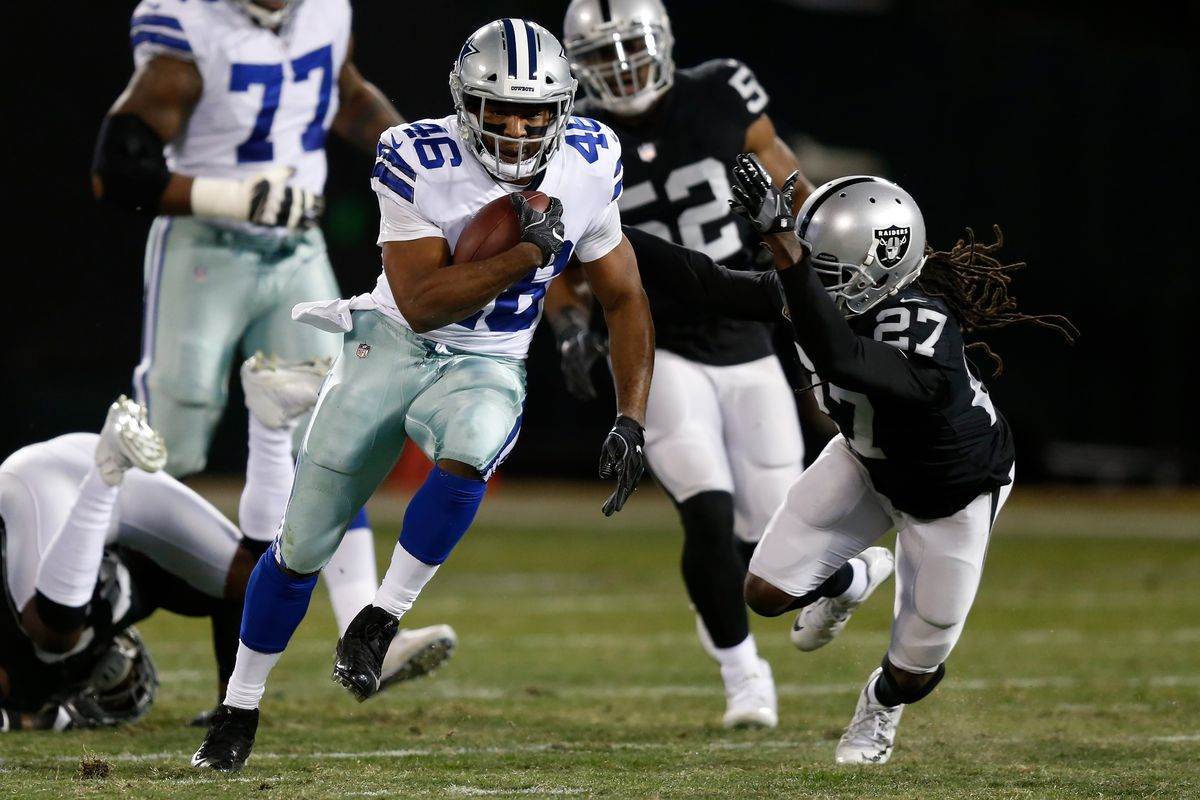 Early on, the Cowboys' offense was putting on a clinic in how to expose a Raiders defense that simply lacks talent on the second and third level. Doubling Khalil Mack and forcing him to run through traffic allowed this offensive line to get out in space and play up the field, which got Alfred Morris going similarly to last week's effort against the Giants.

The Cowboys seemed primed to wear down the Raiders all night long with Morris before searching for big plays with Smith, but instead had a few drives stall thanks to poor decisions with these backs. Throwing the ball to Morris in space while running Rod Smith in tight zone is poor coaching by Scott Linehan, and it allowed the Raiders to fight their way back into this game with a great chance to steal it.

Rod Smith was able to score for the fourth consecutive game in the second quarter, and this play was a perfect example of the Cowboys' unison up front as Jonathan Cooper and Tyron Smith flowed to the second level with ease to create the gap for Smith.

This was a premier match up in this game that I highlighted in a previous Sean's Scout, and Collins – with the help of chipping TEs and RBs – got the job done against Mack for the majority of the night.

When Mack did capture the edge, something he can do in an endless amount of ways, Collins did well to use his strength and steer Mack behind the pocket to give Dak Prescott areas to step up and deliver the football.

Ultimately, the Cowboys were going to be the better team on the field last night if they didn't let this Raiders pass rush derail their offense, and for the most part they didn't – scoring just enough to pull out the win.

On a number of critical plays that kept Oakland drives alive, QB Derek Carr was able to escape the pocket and extend plays. Each time, it felt like he was running right into an area that Cowboys DT David Irving would have occupied and been in position to make a stop.

As it was mentioned all night on the broadcast, the Raiders lack a true identity on offense. A unit lost between being a spread team or a physical running one, both concepts were used in their comeback against the Cowboys here.

With Irving's presence also missed inside against the run, the Cowboys adjusted very well to Marshawn Lynch's punishing style up front as this game went on. Some fans may think Sean Lee is all the Cowboys need defensively to hold up in this area, but Rod Marinelli was able to put DeMarcus Lawrence in better situations to play the run along with 1T DT Richard Ash in support of Lee.

Lawrence's effortless ability to win both inside, on the edge, and on the move continues to stand out in what was one of his best all-around performances of the season last night.

The problem that exists for Charlton in this defense right now is that his best spot to make plays continues to be at LDE, where DeMarcus Lawrence is rarely going to come off the field. When Charlton did get opportunities to rush off of that strong side, he showed some burst off of the edge that translated better than it has at any previous point to some power rush moves back towards Carr.

On Jeff Heath's game-winning forced fumble, Charlton did a great job of initially keeping Carr in the pocket, using his length with the Cowboys in man coverage behind. Charlton tried to spin out and stop Carr from ever crossing the line of scrimmage, but was held back as the play got loose and nearly ended the Cowboys' hopes.

For a rookie that was given some high expectations to start his Cowboys career, give a lot of credit to Taco Charlton for the way he's handled starting in a rotational role and slowly improved his pass rush ability with each rep he gets.

Once the Raiders' running game was slowed down, they looked to get the ball out of Carr's hands quickly and attack a Cowboys defense that will always take short throws being completed in front of them.

CBs Chidobe Awuzie and Jourdan Lewis did a great job tackling in space and delivering some big hits along the way in this role, as they've done consistently since both being inserted into the starting lineup. Their play on the outside has allowed Anthony Brown to move inside along with S Xavier Woods, and this coverage package for the Cowboys worked well all night in sticking to their scheme and forcing Oakland to make enough plays to beat them – something they came one snap short of.

The next time we're laying out one of these post game Sean's Scout posts, it will once again include notes on Ezekiel Elliott as the Cowboys' running back. This boost to their offense will come in yet another must win game against a Seahawks team looking to respond after a bad divisional loss on their home field.

Regardless of if Elliott's efforts will be enough to get the Cowboys into the playoffs, something that is not entirely in their control, adding another proven, young player back into the mix to go with the number of guys that stood out on both sides of the ball in this season's most thrilling game from last night will be exciting.

Until then, carry around index cards for good luck (I'll be doing so for my finals this week), and check back here for future editions of Sean's Scout.