I just saw something I found interesting and wanted to share it with you guys. You know that I support this website … www.FireTheCowboysGM.com … well they've had a poll on their front page for a week or so now, and the results are worth a mention here.

The question being asked is this, “Based on the results from the last 12 years (no playoff wins), how many times would Jerry Jones have fired the General Manager, if it wasn't him?”

54 people out of the 1,154 that have voted think the answer is none, 95% of the votes are for at least an answer of once. That includes 822 votes agreeing that he would have done it three times or more.

It's funny because so many people like to say that he isn't the problem when people like Shannon Sharpe starting saying he is the problem. This little website with very little exposure has already gotten 1,100 people to agree that he has messed up pretty badly. I wonder how the results would change if more people went and checked out the site.

Jerry needs to stay in the owners box, stay out of the locker room, and let the coaches coach….. 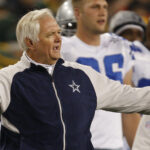