The Dallas Cowboys have arguably best young running back in the entire NFL in Ezekiel Elliott. He not only lead the league in rushing as a rookie, but did so rather easily. As long as Elliott can continue to stay healthy, there's not another RB on the roster who should see the field very often. But, good teams plan for worst-case scenarios, which means the Cowboys need a contingency plan in place to cover themselves if worst comes to worst.

As things stand right now, Darren McFadden, Alfred Morris, and Jahad Thomas are the only other RBs currently on the roster. McFadden is a favorite of the coaching staff and will likely stick around, but both Morris and Thomas will have to prove themselves in training camp to make the final 53 man roster.

With Elliott and McFadden sitting atop the depth chart, there could be an open roster spot for another RB. Without a doubt the Cowboys are aware of the situation, which is why I think they will be monitoring roster cuts and potential trades very closely the remainder of the off-season.

With all of this in mind, I thought I would share with all of you three running backs I think they should be monitoring closely. Each of these RBs will not only add valuable depth, but could also push Darren McFadden for that RB2 spot.

To continue reading, use the arrow tool provided.

They shouldn’t of let Darius Jackson go in the first place I thought he was drafted to go behind Zeke. He played well in preseason but for some strange reason he got released to make a spot for Darren McFadden but they knew they weren’t keeping Dunbar and Morris was on the bubble I hope they get Jackson back

I thought it was really strange that they released Darius Jackson when they did, especially after keeping him on the active roster nearly the entire season. I guess if he is released by the Browns, we will find out what the Cowboys actually think of him.

The RB situation is quietly one of the most interesting camp situations we have. I initially thought and believe many expected us to be in the market for that Dunbar-type 3rd down back but as I listened to hints from the FO I believe he is already on the roster in the name of Zeke Elliot. It seems they are poised to use him in more passing situations and why not. He is a far better 3rd down back than about any in the league and also happens to be about the best all-around back in the league. That being said the writing is on the wall for Morris and I don’t know that Thomas is going to have enough to do anything more than make the practice squad. So that leaves us with Zeke and McFadden and one or two Smiths. It remains to be seen how either of them may be used. The crop you listed here are intriguing and I think we would all be interested in getting Darius Jackson back. I am also interested in Alex Collins. However it shakes out I think there will be a new guy there before the season starts and I’m sure they will be watching waiver wires closely marching toward 53-man cutdowns.

Randy, everything you said is exactly my train of thought as well. I’m actually not all that comfortable with McFadden being the RB2 either. He is at that age where an RB starts to decline and his injury history is a concern. I wouldn’t be surprised if they add another couple running backs at some point this off-season.

I honestly don’t think they need to be in search of a running back unless someone like Yeldon is waived.

With Elliott and DMC, there aren’t a lot of snaps to be had.

As much as people don’t want to admit it, McFadden is the perfect back up for the team. He can take early down snaps if necessary and he can play on passing downs as well because his pass blocking is almost as good as Elliott’s.

I’d rather role with Jahad Thomas over Alfred Morris if we are trying to find the “scat back” type. But with Elliott and McFadden’s receiving ability in addition to the addition of Ryan Switzer, I don’t think the scat back is necessary. Don’t force it just because teams have had success with those players. They are VERY difficult to find.

John, I agree that they are probably set with Elliott and McFadden, but I think they will be watching the waiver wire. McFadden’s age and health have to be a little bit of a concern. A younger RB to push him and contribute on special teams would probably be what they’re looking for.

No doubt, the age is a concern. For youth, I’d actually be more interested in Rod Smith as an early down backup for Elliott. Very athletic and powerful guy could be effective. He also plays special teams.

I like the idea of Rod Smith, but just haven’t seen enough of him as a RB. 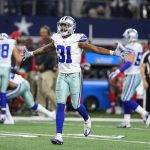 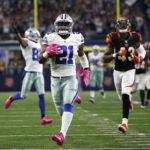