A lot of things were wrong with this Dallas Cowboys football team before the bye week. A 2-3 start left that clear. The defense suffered a couple of injuries and it wasn’t even decent. But even the offense struggled. Undoubtedly, one of the biggest problems was the offensive line.

After losing Doug Free and Ronald Leary during the offseason, new faces were fighting for the two starting vacancies left by the veterans.

To open the season, Chaz Green was named the starting left guard only to eventually lose the job to Jonathan Cooper. Cooper, a former first-round pick, has been one of the biggest difference makers in the Cowboys’ last three wins.

The running game has improved, and he’s made a few key blocks for Ezekiel Elliott. Overall, the offensive line looks entirely different. After Cooper became LG1, this offensive line is looking more like it did in 2016. 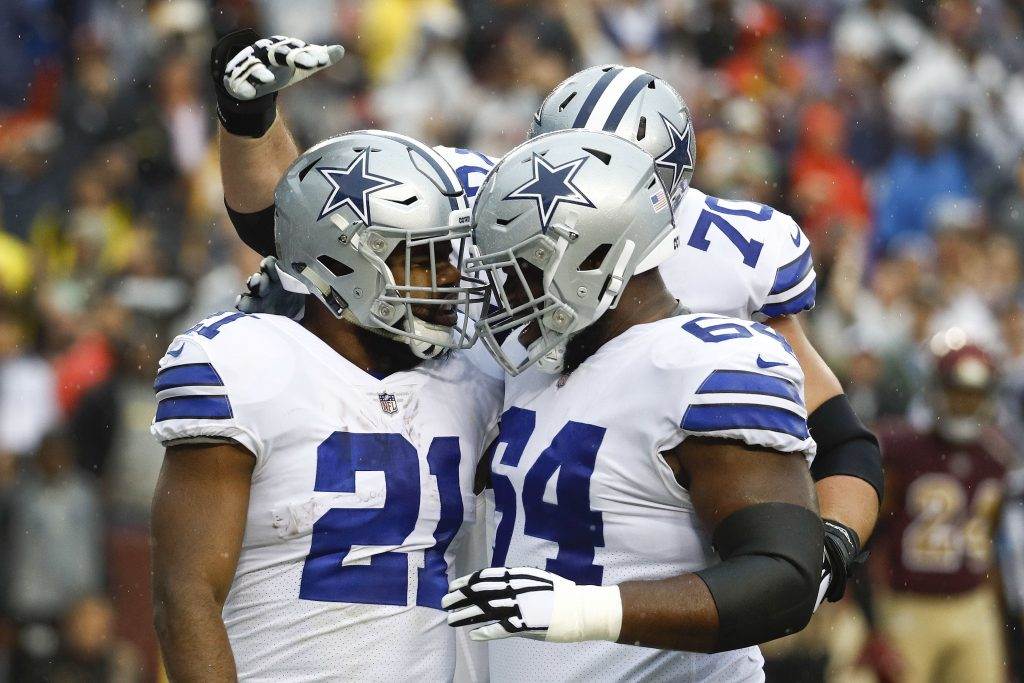 I’m convinced that Cooper’s promotion has been one of the best decisions this coaching staff has made in the season. And now, there’s yet another reason why this will prove fortunate for the Cowboys.

Tyron Smith has been dealing with back and groin injuries for a while now and was taking a lot of practices off. This time, the left tackle didn’t practice all week. With lingering injuries all season, sitting 77 out this Sunday might be the best decision by the Cowboys.

Luckily for Dallas, Chaz Green made more than a decent job covering for Smith in 2016, and he should do just fine in Atlanta.

Now, don’t get me wrong. Obviously, going from arguably the best left tackle in football to Green is obviously a downgrade. But with 79 on the field, the offensive line will not become big concern as some would think.

Green will do just enough to keep this offense working.

Last year, he started in two games covering for Tyron Smith. One versus the Bears and the other at San Francisco. His performance impressed Cowboys Nation, and there’s no reason to think it won’t this time around.

In the above play, the run by Elliott isn’t an enormous gain, but look at Chaz Green. That’s a solid block right there. That’s what Green will get you. Maybe he won’t dominate all game, but he won’t be a liability.

In the run game, his blocking is pretty consistent. Surely, the running back corp will need help from the offensive line as the Cowboys get ready to play their first game without Ezekiel Elliott since 2015.

Chaz Green also did a good job in pass protection. He’s not the most flashy LT ever, obviously, but he gets the job done. While I didn’t like him as a LG1, it’s fair to say he’s a solid backup tackle.

He rarely struggles, and the Falcons don’t have a premium pass rusher to take advantage of Green. This would’ve been chaos for the Cowboys if Green was still starting at left guard. However, there’s enough reason to be confident on this offense without Smith.

It’d be wise in my opinion to let Smith sit this one out. The Cowboys have tougher games ahead. They face the Philadelphia Eagles in week 11 and having Tyron healthy for that game will be more important than having him this weekend.

The Dallas Cowboys are facing a lot of adversity as they get ready to possibly play without three of their biggest stars. Ezekiel Elliott, Dez Bryant and Tyron Smith.

Will they get through it?

Tell me what you think about “With Smith Questionable, Chaz Green Should Do Fine For Cowboys” in the comments below, or tweet me @MauNFL and let’s talk football! If you like football and are looking for a Dallas Cowboys show in Spanish, don’t miss my weekly Facebook Live! show, Primero Cowboys!