Well, it was a tough weekend. The Dallas Cowboys lost to the Denver Broncos 42-17… It wasn’t pretty at all. From beginning to end, this team was dominated by the Von Miller led defense and the Trevor Siemian led offense.

I was in shock. I’m a die-hard Dallas Cowboys fan but even still, I objectively thought Dak Prescott and company would comfortably win their first road game of the season. But this is the NFL, and things happen.

Yes, the Cowboys lost last Sunday. But they say that losing is what teaches you the most. So today on Inside The Star, I present to you the second Takeaway Tuesday of the year. I invite you to share your thoughts and takeaways in the comments below. Even if they’re not happy takeaways.

After taking a hit from his own teammate, Jeff Heath, Nolan Carroll is in the concussion protocol. Now, I hate to go after a guy who has just been injured… but Carroll was being destroyed in just about every play out there.

Carroll missed tackles, left receivers wide open and simply forgot how to play football. The Cowboys secondary is far from deep. The Cowboys need Carroll to be at least decent. And he hasn’t been.

With such a young group of defensive backs, the former Eagle is supposed to bring experience  to the table.

With Bene Benwikere waiting for his chance, maybe the Cowboys give him the opportunity to wear the uniform next Monday. The Cowboys could aso take a chance and start preparing Jourdan Lewis to play a lot more than expected in week 3.

And one name the Cowboys can’t forget about is Marquez White. Unlikely? Perhaps, but possible. 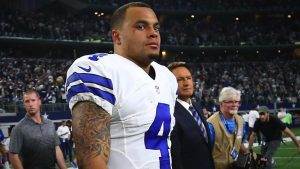 When the Cowboys lost against the NY Giants for the second time last year… it sucked. But I truly believe this was way worse. This wasn’t a three point loss. It was a 25 point loss. And frankly, when I hear the number 25, I wonder why it felt like a longer deficit.

The Cowboys weren’t able to establish the run, and Dak Prescott struggled completing the passes since the first quarter. The receivers struggled to get open too, and some even dropped a few balls when they were.

After all of the “sophomore slump” talk there was during the offseason, it’s only going to get louder now.

The truth is, Dak may be blamed for the loss against the Broncos and any other game the Cowboys lose in 2017. That’s the price of being the Dallas Cowboys QB.

But last time Dak couldn’t get it going, he rallied the week after. And led his Cowboys to victory. I expect him to do so again. The Arizona Cardinals game will be an easy one. Look out for a big win as the Cowboys try to make up for their horrible loss to the Broncos.

The Dallas Cowboys Offense Is Stoppable 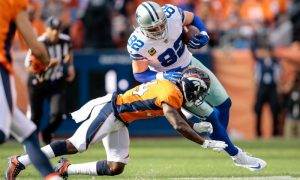 I won’t lie. Nothing surprised me as much as the fact that Ezekiel Elliott ran for just eight yards. I considered the possibility of Dak Prescott having a bad day, but I expected Zeke to run the ball efficiently.

I’m certain that if we were discussing which is Dallas’ biggest strength, we would be talking about this offense. It is supposed to be a machine. Dez on the outside, Beasley on the slot, Gold Jacket Witt at TE and Ezekiel Elliott at running back. All at the same time. How are you supposed to cover that?

It’s simple, if you have the weapons necessary. The Denver Broncos have the personnel required to beat this football team. It’s a good match-up. This isn’t about the Broncos setting “the blueprint”, as many have claimed.

The Broncos happened to have two elite CBs and arguably the best pass rusher in the league. They played better than the ‘Boys. Period. 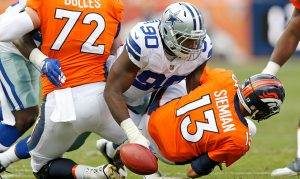 One of the few positive things this week showed in one of the biggest question marks of the team. The pass rush. For the second consecutive week, Lawrence had two sacks. I know it seems irrelevant after such a loss, but think about it. Last year, Benson Mayowa led the team with six sacks.

Lawrence has four after just two weeks of football, and he is getting to the QB often. He is emerging as a face for this pass rush If this team can rely on him all season, the defense will have quite a weapon in Lawrence.

Remember, Damontre Moore and David Irving will come back soon which can only mean good things for Dallas. If Moore turns out to be a good player, the DL will look a lot better.

Unfortunately, this is a contract year for Lawrence. So we’ll have to enjoy his time in Dallas while we can, for he may not be here in 2018.

The Dallas Cowboys Have No Excuses

I had many takeaways after watching the Cowboys lose the way they did. And after seeing many angry reactions blaming a specific player or coach, I felt like this takeaway might be the most important of all.

This was a game in which Sean Lee missed tackles, Zeke had eight rushing yards, and Jason Witten dropped an easy TD pass… But we’re going to blame Garrett only? Or just Dak? That’s simply not fair.

The team simply didn’t show up. It happens. They had a bad day. Now it’s time to move on and get ready for the Arizona Cardinals. The Dallas Cowboys have a lot to work on, and the Cardinals may be the right team for these guys. Let’s see a bounce back.

Tell me what you think about “Takeaway Tuesday: What We Learned From Cowboys Loss VS Broncos” in the comments below, or tweet me @MauNFL and let’s talk football! If you like football and are looking for a Dallas Cowboys show in Spanish, don’t miss my weekly Facebook Live! show, Primero Cowboys!