This Dallas Cowboys season has been a roller coaster of emotions. Win. Loss. Win. Loss. This week, Cowboys Nation is trying to get over a very upsetting loss to the Los Angeles Rams. After going into halftime with an eight point lead, the Cowboys saw the win slip through their fingers in the second half.

It was frustrating. It was more frustrating than week 2. Because the Dallas Cowboys were playing good football during the first two quarters.

But they couldn’t execute for 60 minutes.

Just like every loss, we learned a lot from this football team last Sunday. Here are my takeaways from the Cowboys high-scoring game versus the Rams.

Xavier Woods Should Be Starting At Safety

During the offseason, one of the most debated positions among Cowboys fans was the safety position. With JJ Wilcox and Barry Church leaving Dallas, a battle was about to take place.

Jeff Heath, Xavier Woods and Kavon Frazier would have to fight throughout training camp and preseason to earn that starting job. To start the season, Heath was given the nod. Four games later, it’s clear he isn’t cut out to be a starter.

Xavier Woods, on the other hand, has been pretty impressive so far.

Xavier Woods needs to be a starter. pic.twitter.com/WWYeFBlxNN

At this point, the Cowboys should give Woods the opportunity to start. From the moment he was drafted last April, we all knew he was going to be a steal for this team. The Dallas Cowboys should start Woods as soon as next week.

This Defense Needs David Irving Back

The Cowboys offense hasn’t lived up to the hype. That is true. But this defense remains a problem for this Dallas Cowboys football team.

Even though DeMarcus Lawrence has been amazing so far, with 7.5 sacks through four games, the defense isn’t cutting it. Yes, Lawrence is trying to earn the “War Daddy” title. We can argue he is succeeding at it.

But the truth is, there’s no other Cowboys DE that opposing defenses fear other than 90. Not Taco Charlton, not Benson Mayowa, not anyone.

The next time the Cowboys take the field, they’ll have David Irving right there. We don’t know if Rod Marinelli will try to to get them both on the field at the same time, or if he’ll rotate both as LDEs.

Either way, the Cowboys need someone to pressure QBs when D-Law isn’t there, or our “War Daddy” won’t be enough.

The Cowboys Need to Dominate the Clock 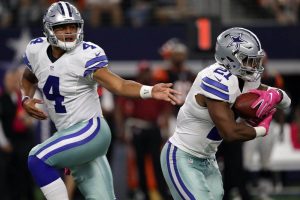 This Cowboys team is made to win on offense. Even with a promising young group of players on defense, they aren’t the guys who will carry this team and pull off the important wins.

One of the most important things for this team is controlling the time of possession. Something they haven’t been able to do as well this season. With a “bend-but-don’t-break” type of defense, the Cowboys need to keep that defense off the field for as long as they can.

The defense may be decent. But they’re not elite. They need the offense to be on the field as long as possible. Last year, the Dallas Cowboys ended the season as the third best team on average time of possession.

There’s No Chemistry Between Dez and Dak 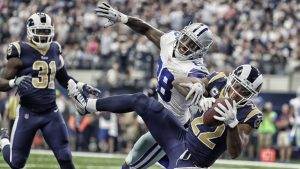 In 2016, we saw Dak Prescott and Dez Bryant pull off a lot of big plays. Naturally, all of Cowboys Nation thought we would be seeing that a lot more of that after Dak and Dez had an entire offseason of practicing together.

We thought they would develop a chemistry that would destroy opposing defenses.

However, that chemistry doesn’t seem to be there.

This doesn’t mean that Dak Prescott won’t be able to have success with 88. Not at all.

Maybe, if this offense starts trying to move the ball with Beasley, with Witten, Dak will find his groove back. It’s not about avoiding Dez. It’s about stop forcing it to Dez.

The Offensive Line Might Be This Team’s Biggest Problem 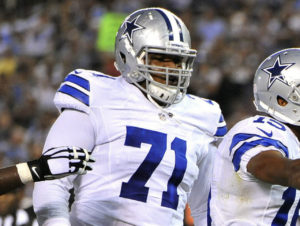 The offensive line is not the worst unit on this team. But it might be the biggest problem.

This unit is supposed to be the Cowboys’ biggest strength. And when they struggle, both in the passing game and running game, the entire team will struggle.

Now, the “Dak Prescott and Ezekiel Elliott are only good because of their OL” is a false narrative. But we’d be lying to ourselves if we said it didn’t help. Dak Prescott is being pressured way more than he should be. Ezekiel Elliott is fighting for every yard.

Chaz Green and Jonathan Cooper are not being able to fill Ron Leary’s shoes. La’el Collins has a long way to go before we can call him a quality starter.

If the Dallas Cowboys want to keep being one of the best offenses in the NFL, the OL needs to pick it up.

The Cowboys face the Green Bay Packers next Sunday at Dallas. It won’t be easy for Jason Garrett’s team to win this game, but it won’t be impossible either. This is supposed to be a Super Bowl team. Can they execute, not just for a half, but for 60 minutes? This will be a very telling game for this football team.

Tell me what you think about “Takeaway Tuesday: What We Learned From Cowboys Second Loss” in the comments below, or tweet me @MauNFL and let’s talk football! If you like football and are looking for a Dallas Cowboys show in Spanish, don’t miss my weekly Facebook Live! show, Primero Cowboys!