Takeaway Tuesday: What We Learned From Cowboys Win VS 49ers

How 'bout them Cowboys! Dallas walked away with a blowout win versus the San Francisco 49ers last Sunday after a long and busy bye week. They needed this win. Even though the 49ers came to the game with zero victories, the Cowboys took care of business after winning 40-10.

It was an important win for Dallas since they needed to regain confidence and adjust after starting the season 2-3. Will the Cowboys continue to roll? Maybe, maybe not. But it sure looks like it.

In their way to victory, the Cowboys showed us quite a few positive things about this team. Here is this week's Takeaway Tuesday edition! 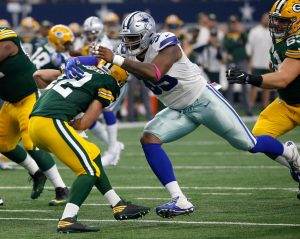 I can't believe we're talking about the Cowboys having something similar to a pass rush, but that's exactly what they have shown us after six games. This team has made the right decision of keeping both on the field at the same time and that has paid off so far.

This season, the Cowboys have sacked the QB 21 times. There are only five teams in the NFL that have more. From those 21, DeMarcus Lawrence has 9.5, and David Irving (who has played only two games) has 3.

Both have also impacted the run game, too. That's right. The Cowboys have two quality defensive linemen in their defense, and that's more than enough reason to celebrate. The front office will have to find a way to keep them both in Dallas next offseason.

The offensive line hasn't been as dominant early in the season as we expected it to be. La'el Collins is progressing week after week at right tackle, but left guard has given the Cowboys a couple of headaches.

After giving a chance to both Jonathan Cooper and Chaz Green in the first games of the year, I really believe Cooper should be this team's LG1 and that Dallas should forget about the Chaz project at LG.

Chaz Green isn't even a better guard than Cooper, and being as injury-prone as he is, I wouldn't understand if this coaching staff insisted on playing 79.

Jonathan Cooper didn't allow a pressure all game against SF, per PFF. Needs to be starter from here on out

Not only was Cooper great versus the pass rush last week, but he was excellent at run blocking, as the entire offensive line found its groove at the running game. Cooper should be this team's starter at left guard. Period.

Ezekiel Elliott Had The Game He Needed to Have

Speaking of the running game… what can I say about the show Ezekiel Elliott put on in San Francisco? It was more than epic. I will let the numbers speak for themselves:

Ezekiel Elliott's 219 yards performance was just what the Cowboys needed. Specifically, what he needed. There's been a lot of criticism around Zeke for multiple reasons. Whether it's the off-field drama or that he “lost a step”, “isn't in shape”, or anything like that, Elliott could use some motivation.

Elliott is still a great running back, and a performance like this could get the Cowboys' superstar to another level this season. After putting what was arguably best career game yet against the 49ers, you can bet on Zeke being hungry every week now.

Jaylon Smith's career has been a crazy one so far. We were all excited about seeing 54 on the field this year and we were surprised to watch him play a lot early in the season… until we realized he was hurting this defense.

This obviously doesn't mean that he won't be a good player going forward, but forcing him to play as much as he could.

Last week, we saw a lot of Sean Lee and Anthony Hitchens, who were together on the field for the first time in the season, and the snap count for Smith was reduced. He played in less than half of the Cowboys' defensive snaps. We saw some flashes from Jaylon Smith in San Francisco, including a sack and a forced fumble.

I like the idea of playing Jaylon less from now on. It's good for the team, and you can use him in different ways to get him going throughout the game. When he is healthier and more prepared, unleash the beast!

Rod Smith Should Be RB2

For my final takeaway, I wanted to go in a different direction. The Cowboys were beating the 49ers in such a way that we saw a lot of backups late in the game. Cooper Rush was in, and so was Rod Smith.

One of the debates Cowboys Nation has had this season is, who should be this team's backup running back? Darren McFadden has surprisingly been inactive all year, letting Alfred Morris take care of the RB2 duties.

However, Rod Smith should be the backup running back for the Dallas Cowboys. The only thing Morris is probably better at, is experience. But the upside Smith would provide to this team as a long-term backup to Ezekiel Elliott should give 45 the edge.

On Sunday, he ran for 61 yards in eight carries and he seemed ready to play. Obviously, with the uncertainty of Zeke's availability going forward, this is a more relevant matter than what it may seem.

The Cowboys may have beaten an 0-7 team, but there are a lot of promising things for this football team. There's a lot of football left to be played, and Dallas is on time to change their destiny and get to the playoffs. For now, on to the Washington Redskins.

Mauricio Rodriguezhttps://www.facebook.com/PrimeroCowboys/
I love to write, I love football and I love the Dallas Cowboys. I've been rooting for America's team all the way from Mexico ever since I can remember. If you want to talk football, I'm in... You'll find me at @MauNFL.
Previous article
Plays Of The Week: Stars Shine Bright In Cowboys Win
Next article
What Does Cooper Rush’s Promotion Mean for the Cowboys?