For the Dallas Cowboys, things are far from being ideal. After suffering blowout losses in two consecutive weeks, there're a lot of things to think about. At this point, making the playoffs at all would be a huge surprise for a team that's suffered a lot of problems.

It isn't easy watching our favorite team, which was one of the unquestioned favorites to contend for the Super Bowl in 2017, be at the .500 mark with five wins and five losses. A team that right now, doesn't look promising at all and will probably miss the playoffs after being the #1 NFC seed with a 13-3 record less than a year ago.

But here we are, as we should always be. Win, lose or tie, we will always root for the Star. Having said so, here are this week's takeaways!

“Bad” would be an understatement when describing how last Sunday night went. But, let's start this article off with a positive note. Rookie Ryan Switzer had himself a good game versus the Eagles, including a 61-yard opening kickoff return.

Thanks to Switzer, the Cowboys were able to put three points on the board and take the early lead. While things didn't turn out the way we wanted after that, credit can't be taken away from the rookie returner.

Sometimes, in positions like this, confidence boosts can make a huge difference. Switzer also had other good plays, and this might be just what he needed. He's a player we definitely need to keep an eye on.

Anthony Brown Is a Big Concern

Remember when we were so excited for the sixth-round pick Anthony Brown? His rookie season was more than impressive and it looked like there was a future shut-down cornerback in town.

Life comes at you fast.

So far, Brown hasn't had anything close to a good year, and to be honest, there's not a lot of reasons to be hopeful. He's been burnt by a lot of receivers so far, and we're at a point where we have to have a conversation about #30.

Is it time to downgrade Brown? It may sound extreme, but with young players like Awuzie and Lewis, it would be interesting to give these players opportunities to fight for the starting jobs.

If the season continues to slip out of the Cowboys' hands, competition would be good for this group of guys.

After Jeff Heath was ruled out with a concussion last Sunday, it was Xavier Woods' time to shine. Although the Eagles ultimately soared over this Sean Lee-less defense, we did see some promising things.

From the moment Woods was drafted, many of us believed he would end the year having earned the starting role from Jeff Heath. And I truly think he's about to take over.

This is an example of why Woods should be starting at safety. He brings a unique play-making ability to the table. Notice how he takes away the running back's route just before running towards Wentz to make the stop.

He's done a good job just about every time he's on the field. To be fair, Jeff Heath hasn't done a lot to keep his job and it'd be good for this defense if the coaching staff finally gives the rookie safety the nod.

Life without Ezekiel Elliott continues, as the Cowboys have lost both games they've played without him so far. In neither of the two games has the offense truly worked at all.

However, the Dallas Cowboys finished the game with over 100 yards rushing, including 91 from back-up running back Alfred Morris. Those are some pretty numbers, considering Zeke isn't on the field.

However, although I hate to be the one with the pessimist takes, I believe the stats lie regarding the running game from this team. Sure, Morris eclipsed the 100-yard mark but was he consistent enough? My answer is no.

Although Morris had a couple of big gains, the longest one being for 22 yards, the truth is the Cowboys weren't able to establish the run. To me, it felt a lot like 2015.

There were a couple of long runs which bulked up the stats, but there wasn't anything close to a running game that you can trust for those “third-and-short” sort of plays.

I still believe that Rod Smith and Darren McFadden should be given more opportunities to compete for Morris' job, and I think it would bring nothing but good things for this offense.

The Coaching Staff May Be In Jeopardy 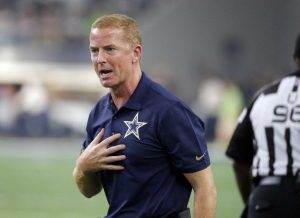 I've repeatedly said that I'm not a part of the “Fire Garrett” or the “Fire Everyone” team.

Even still, every time I lean more towards this side of Cowboys Nation. This year specifically, the Cowboys have been out-coached pretty often.

Jason Garrett is a solid head coach, but I'm not sure if this is what this team needs anymore. If the Cowboys finish the season with an 8-8 record or worse, (which is not unlikely at all) I think that next offseason is when we'll see a change.

With the talent that this team has, it won't get any worse than this season. If Jerry Jones and company want to make a change, this is the year to do it.

As for the coordinators, I think that Rod Marinelli should be held accountable for the defensive struggles this team has had and a change of scheme would do nothing but good for a defense full of athletic players.

Although I also would be open for a change at the offensive coordinator position, I won't be surprised if the amount of talent this team has on offense will save Scott Linehan's job.

Mauricio Rodriguezhttps://www.facebook.com/PrimeroCowboys/
I love to write, I love football and I love the Dallas Cowboys. I've been rooting for America's team all the way from Mexico ever since I can remember. If you want to talk football, I'm in... You'll find me at @MauNFL.
Previous articleIs Jason Garrett The Root Of The Cowboys Problem?
Next articleCowboys Receiving Threats Are No Longer Threatening