Terrance Williams catches a lot more than passes as a member of the Dallas Cowboys. He catches a lot of grief that a lot of times is unwarranted. It could be argued he is the most hated player currently on the roster. But, did his big game against the Kansas City Chiefs last Sunday finally quiet his critics?

The Dallas Cowboys put together an impressive four quarters of football last week against the Kansas City Chiefs and Terrance Williams' performance was definitely one of the bright spots of that game. You may have forgotten already, but Williams caught a career-high nine passes for 141 yards.

Watching Terrance Williams play like one of the best wide receivers on the field in any given game isn't something a lot of Cowboys Nation is accustomed to. In fact, Williams is typically catching flak from Cowboys fans. 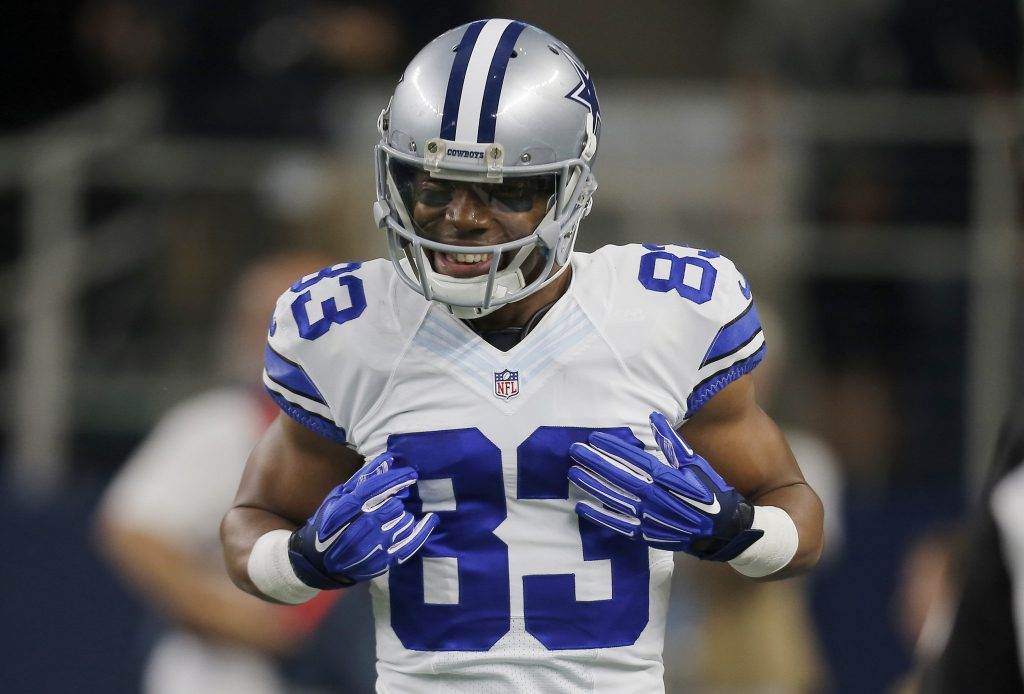 I think we can all agree we've all been guilty at one time or another about giving Williams grief or shouting a four letter word in his direction. He has become everybody's favorite whipping boy and I know a lot of us wondered what the Dallas Cowboys were thinking by re-signing him to a four-year contract.

It may or may not be that much of a surprise to you, but Terrance Williams definitely hears all these things spoken about him.

“It's kind of hard when you're just standing there being the [butt] all the time of people's jokes and people always talking bad about you,” Williams said.

I don't know about you, but that would make it difficult for me to put my best foot forward week after week when I know I'm going to be criticized regardless. But thankfully, Terrance Williams' performance against the Kansas City Chiefs might just keep his critics at bay for a while.

It's sometimes difficult for Cowboys fans to grasp why the coaching staff value Williams so much. He doesn't hardly ever show up in a big way on the stat sheet. His contribution to the team typically goes unnoticed. But, the coaching staff loves the effort he puts forth blocking down the field in the running game and the weapon he can be in the receiving game when targeted.

Yes, we all know that he is a “body catcher” and sometimes drops passes that hit him right in the hands. But, he is still capable of breaking a game wide open. Look no further than what he did against the Chiefs Sunday afternoon. 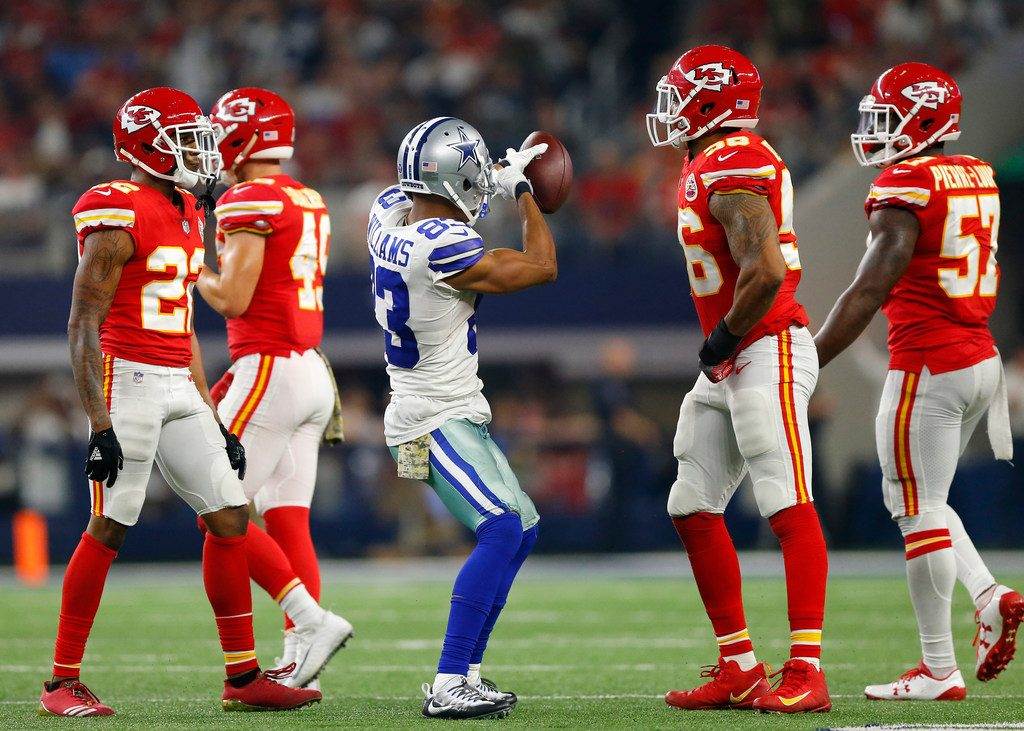 Now, don't expect Terrance Williams to go off and continue racking up 100 yard receiving games. He has only hit the 100 yard receiving mark two other times in his career. Once in 2015 when he caught eight passes for 173 yards against the Washington Redskins with Kellen Moore at QB. The only other time was in his rookie season against the Denver Broncos (four catches, 151 yards, 1 TD).

Fortunately, the Dallas Cowboys coaching staff don't expect Williams to rack up continuous 100 receiving yard games. He is their WR2, but probably the third maybe even the fourth option for Dak Prescott in the passing game. His targets will be few and far between. He just has to capitalize on his opportunities, which is exactly what he did against the Chiefs.

Whether or not Terrance Williams was able to quiet any of his critics with his big game against the Kansas City Chiefs doesn't really matter. He just has to continue to keep his head down and capitalize on his opportunities when the ball comes his way.

Be reliable. Period. It's as simple as that.

Do you think Terrance Williams quieted any of his critics?

I’ve always been a fan of T W. I heard him say that too, (your quote above), and even after such a stellar performance, wow. I could feel the pain in his voice.
Sure he body catches, and drops a few… Our supposed superstar wr catches with his hands, and drops his share of passes too. However TW would be even better if Linehan used him to his strengths. TW, even at Baylor, was most dangerous catching the ball on the run, and heading to the endzone. Why he’s not used on crossing routes more, and out routes and sideline routes less is beyond me. Let him catch on the fly and his yac will rank among the NFL’s best.

I’ve been a fan of T-Will as well. Yes, I get frustrated with him when he allows a pass to bounce off his hands that should have been easily caught, but you’re right he’s not being utilized correctly. Crossing routes, deep in, and even slants are his best route combinations. The strength to his game is catching the ball on the move and picking up yards after the catch. Linehan needs to do a better job of putting him in those type of situations, much like he did against the Chiefs.

Hopefully, Linehan has caught on, and the game against the Chiefs was not an accident by Linehan. Please shall soon find out

We are all hoping that is the case.

There has been some justified consternation when Williams stays inbounds as the clock expires, or muffs a catch and it tips up INT in a game the team goes on to lose. But on balance he is a positive force, and he was the guy last week. KC did not have a coverage for him.

Certainly good value from a 3rd rounder, legit #2 WR who can make plays. My bigger issue right now is the rise of – and / or shackles on – Butler, and what kind of added offensive pop we can probably get if he starts. He has better ability to get open deep than any WR on the roster, and in turn that could free Dez up underneath with defenses being unable to load up on him.

There is another corner or two for Butler to turn to consistently pull the double coverage to him and off Dez, but IMO he can’t do that unless he is starting.

So my position is unchanged by TWill’s big game last week. The nice thing is that these guys do have a team ethic in which the main goal of each, even Dez, is to win. They’re not carping at each other and they accept the role they are assigned in the offense. Which is how it works on winning teams.

I’m personally kind of torn about Butler. He is just so inconsistent to be trusted as a starter, but he does provide that deep threat element to the offense. I completely understand why the coaching staff continues to start Williams, but they have to continue to utilize him to his strengths like they did against the Chiefs. We might see both of them more this week with Dez Bryant banged up. Hopefully they can both step up their games.

Can T Williams, be consistent, on weekly basis, instead of every blue moon, especially, with Dez lower leg issues, that may further eradicate the speed that Dez did have, that’s the question?
Can T Williams, continuously, catch the football with his HANDS, that’s another question.

If he can answer both of those questions, in the next six games, while Zeke is on the shelf, this Cowboys offense will be more dangerous than before.

Those are excellent questions. I think if Linehan plays to T-Will’s strengths then 83 can be more consistent. T-Will is at his best when he can catch the ball on the run on crossing routes or slants and then pick up yards after the catch. He is always going to revert back to catching the ball with his body, but he does work hard on his own time to improve his hands. We will have to wait and see how things work out though. I’m personally hoping for the best.