Despite big media outlet's such as ESPN constantly talking down about Terrell Owens, calling him things like Team Obliviator, a cancer, and even some have went as far to call him the worst team-mate in the NFL history.

Yet like Owens tends to do quite often about his doubters he proved them wrong. I can't help but wonder to myself why the world seems to be against this guy? Obviously he had some chemistry issues with Donovan McNabb and Jeff Garcia which is an entire article in it's own. Nevertheless Owens has a heart of gold as evidenced by writing a children's book, holding a youth football camp, creating an Alzheimer's foundation, and now helping a women nearly hit by a car.

[quote_colored name=”” icon_quote=”no”]On a walk to a nearby drugstore, she stepped off a curb and was almost run down by a driver who changed lanes abruptly.

Hopping back onto the curb, she nearly collided with an athletic-looking fellow who checked to see that she was OK and made sure she made it back to the hotel.

That same fellow came through the company’s booth the next day.

“He was so nice when I saw him at the booth and thanked him again for helping me,” she said. “He talked to us for a while and was very nice, posing for a picture with me. The class loved it.[/quote_colored]

Say what you will about Terrell Owens but the proof is in the pudding the guy is one of the greatest receivers in the NFL's history and has a big heart and despite on the field controversies has never had an off the field issue and is always helping out the community. Owens is 2nd all time in receiving touchdowns with 139.

Yeah I was going to make reference to Romo taking a homeless guy to the movies and when he helped an older couple change a spare tire on the side of the road (what a great guy) haha but I thought it didn’t fit well or specifically flow well.

haha sorry I watch to much Frank TV.

Way to go T.O., seems like him and Romo are your every day good guy.

Good story Ray. T.O. is probably not the most politically correct player in the league and I sure that he can be a pain when he wants to. He probably isn’t the demon the media paints him either. 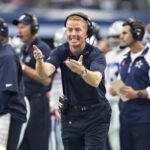