We here at A Cowboy Nation have been asked to participate in a MVN project called Off Season Road Map. The Cowboys Road Map is and has been pretty clear since failing to make the playoffs last year. However this project is focusing on the top three positions of need. As stated here in an earlier post, the needs have not changed!

Tops on the Cowboys agenda (as far as players go) this off-season is a tie! Position 1a I would say is the need for a quality veteran back up quarterback! And do not even try to tell me that we have that with Brooks Bollinger! Do not get me wrong he is a serviceable QB, but in no way shape or form is he a guy that can come in at a moments notice and produce enough to win games. This team needs a guy like Steve Beuerlein was in the 1992 season, backing up Troy Aikman. Now I realize that that may be a tough chore, but they can get better than what we have.

Position 1B is a position that we have been complaining about for years now, at least me anyhow! Safety, now all you dirty Sooners need to just shut up already! This guy is terrible and has been terrible for a looooong time. All he has ever been is a hard hitter. Now notice I said “hard hitter” and not “a great tackler”. He has never been worth a crap at tackling, or being able to cover anyone with a number not in the 70's! The only way he ever got any accolades is by laying the thunder on someone, and now he sucks at that too! This team needs a “ball hawking”, cover safety, with the ability to TACKLE!

Position 3 is simply this, a run stuffing nose tackle! He would not even have to play in passing situations, just be able to clog the middle! The Ravens, and Giants game taught us some very valuable lessons last year. One Jay Ratliff needs to be a defensive end! That guy is a monster in passing situations, but simply cannot clog up the middle in the running game. This caused the Cowboys depend solely on run support from Pat Watkins, and that is not ever going to work out in your favor. Two, the Cowboys led the league in sacks but think of what kind of mismatches could be created if they could line up D-Ware and Ratt on the same side?

While all three positions are necessities, it will be very difficult for all three to be filled adequately. However at this point any upgrade would be well received!

I’m probably alone in this though, but I disagree with Ratliff being on the same side as Ware, seems both would suffer from too much competition, and it would put extra effort to stop on that side. Ware doesn’t need a great end to help him to be good, he just needs one that can hold a block.
Ellis and Spencer could use the extra help from the Rat though.
But I do agree, backup QB, Safety (Biggest need), and NT are needs this year.

As much as Ware moves around the likelihood of them both being on the same side for anymore than one play at a time should relieve that competition. Secondly what I was getting to was, that when they did line up that way it forces the offense to make a decision on who to double! As it stands now the only double is going to Ware on the edge and Rat in the middle.

That’s a good point. If you can get a good NT in the middle to hold blocks, then you can seriously overload that side with Rat and Ware, and the same basically holds true for James and the others being able to take advantage of the extra attention to Ware.

You give yourself soooooo many more options by moving Ratt to DE, no matter which side he is on! With the line the way it stands, the blocking scheme is simple; one guard has to help with Rat, and either your tight end or back has to help with Ware. The problem is that with one being in the middle it gives the offense some maneuverability. With them both on the outside the blocking becomes very thin really fast!

It does become thin, I just feat it would constantly leave Rat and Ware fighting through extra blockers. It’s nice for the team since blocking the both of them would open someone else up, but as it stands now, Ware is able to move all around because Rat still requires a guy in the middle to account for him, a guy that can’t help block Ware on the outside.
I think there are positives and negatives to both sides of this debate. But it all is for nothing if you can’t replace Ratliff in the middle with a solid, hole-stuffing, run-blocking tackle.
As it stands now, with Rat in the middle, it throws off the gameplan for an offense facing him, because a tackle in the 3-4 isn’t supposed to rush, he’s not figured to be someone you have to block, just someone to deal with long enough to get a back past him.
Ideally, you’d find another Rat to let Rat move to end, then again, ideally you’d already have two capable ends. 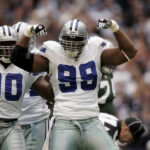 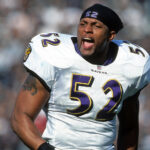