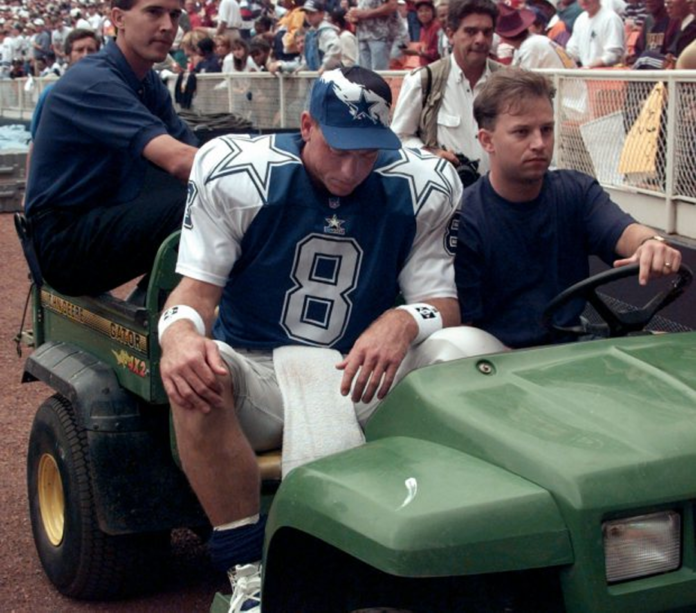 The Dallas Cowboys  fell to 4-1 last night, suffering their first loss of the season at the hands of the now 2-3 Washington Redskins at RFK Memorial Stadium.

The Cowboys scored on their first drive of the night, going 41 yards on six plays, ending with a 32-yard field goal by Chris Boniol. Quarterback Troy Aikman was injured on the drive, leaving the game with a calf injury and not returning.

Washington tied the game on their next drive with a 38-yard field goal by Eddie Murray. After Dallas' next drive stalled, Darren Woodson gave the Cowboys the lead once again when he picked off Washington quarterback Gus Frerotte and returned the interception 37 yards for the touchdown.

The Redskins responded immediately once again, returning the ensuing kickoff 59 yards to the Dallas 38-yard line and scoring six plays later on a 9-yard Frerotte pass to Marc Logan to tie the game early in the second quarter. Washington would add 10 more first half points with a 46-yard field goal by Murray and a five-yard receiving touchdown by Terry Allen to take a 10-point lead into the locker room.

Wade Wilson and the Cowboys started the second half with the ball, but Emmitt Smith fumbled at the Dallas 44-yard line on the fifth play of the drive. The Redskins turned the fumble into a touchdown, a seven-play drive, capped off with a one-yard rushing touchdown by Allen to give Washington a 27-10 lead.

Dallas closed the gap to 14 points on their next drive with a 34-yard field goal by Boniol. After the Dallas defense forced a punt at the end of the third quarter, Wilson led the Cowboys down the field for his only touchdown drive of the day, a six play, 96-yard drive that ended in a Michael Irvin reception to close the deficit to seven points.

The Cowboys defense stepped up once again, forcing a three-and-out on Washington's next possession. Wilson once again led the Cowboys down the field on another scoring effort. The 12-play drive ended with a Boniol 23-yard field goal to leave Washington with a 27-23 lead. Washington's final drive stalled at the Dallas 29-yard line when the Redskins failed to convert on 4th-and-1, giving the Cowboys, down four, a chance to win the game.

Wilson, who was 21-29 for 229 yards on the day, was picked off by cornerback Kevin Williams in the waning seconds of the game, sealing the Redskins victory.

This marks the first game this season in which Smith failed to eclipse 100 rushing yards. Aikman is expected to return to action next week when Dallas returns home to take on the Green Bay Packers, who are 3-1 on the year.