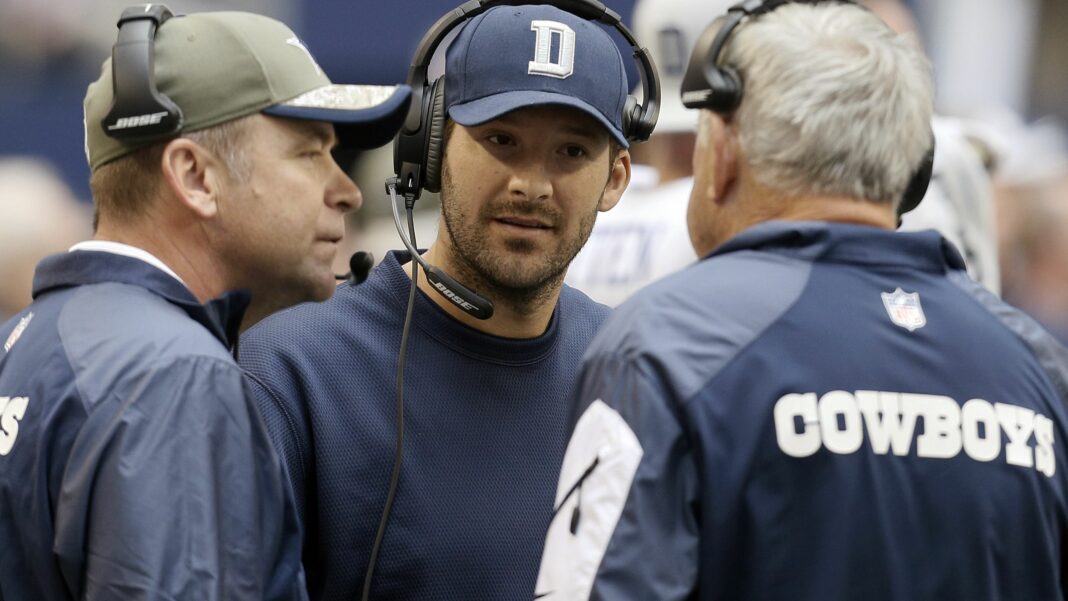 For me, there’s never been any question about whose the leader for this team. I can’t say that for others. That includes a lot of the media and a whole lot of fans. Even during the 6 game winning streak, Tony Romo was given very little credit for the team putting together 6 consecutive victories.

I’ve heard things like, “the run game is keeping him from making mistakes” or “He hasn’t been forced to win a game this year.” Yeah that last quote was by Heath Evans the weekend before the Washington game.

Never mind the Texans game or Seahawks game, what about the Rams game, Heath?

But this isn’t a bash of Heath Evans' piece for the obvious lack of oxygen to his brain preventing common sense statements about the game of football (Although, I could write at least 3,000 words on that).

This is about the hope I have that everyone’s eyes are open to how important Tony Romo is to this team.

Like I mentioned before, I’ve known this since he became the full-time starter back in 2006, and I’m not by myself here; a lot of people realize this.

I’m speaking to those people who continue to doubt or bash #9.

After Romo was hurt against the Redskins, Brandon Weeden came in and did an admirable job while he was in the game. Matter of fact, he scored points on both possessions before he took a seat so Romo could return to the game.

You know what happen after that. Romo wasn’t able to lead the team to victory and the chatter that Weeden should have stayed in the game because he had the “hot hand” began. And honestly, maybe that was the case. Who knows? Maybe the coaches would have relied more on the run game in that last possession in overtime. But that’s hindsight now, and hindsight is 20/20.

So the days following it looked more and more like Romo wasn’t going to be able to play against the Cardinals. But many people – the media included – felt the team could still function well enough to beat Arizona, and then if needed, Romo could sit out the next game against Jacksonville too, sending the Cowboys into their bye week with an impressive 8-1 record.

What Weeden gave many fans and media was a false sense of hope. I mean, in a way I can see why. The run game has been one of the reasons why this team has been successful, and the defense is leaps and bounds better than last season. So I get it, but I knew better than to believe it.

It took about 4 plays on the offensive side of the ball for me to see this team was going to struggle. And if it wasn’t for a defensive touchdown, the offense would have put up three points heading into the Cowboys last possession of the game.

I will say that the team not having two starting offensive lineman didn’t help things. But that wasn’t the big problem. The five o-lineman that did play did well enough for the team to be successful. What hurt them the most was the guy playing behind the center. It wasn’t just the fact that Weeden had a bad day or couldn’t make the same throws as Romo; he had no control over the offense.

The difference between Romo or Weeden playing under center was like night and day, or a playoff team to a team who was headed to top 5 pick in the next draft.

Yes, there’s going to be a difference, because one guy is the starter while the other guy is a backup. Not hard to figure out. But when that backup comes in and it changes everything, you’re going to have problems.

Weeden came in looking like a guy who just walked in off the streets and had only been working with that offense for a week. He most certainly didn’t look like a guy that got a big portion of snaps during training camp – almost all of the snaps during preseason games – or a guy that's been getting any snaps with the first team during the week up to this point in the season.

Like Troy Aikman said, “He should be the most prepared back-up in the entire league.”

But it just didn’t work out that way, and if Weeden continues to play, it will never be that way. Tony Romo is the heartbeat of this team; he’s the conductor of the train, the maestro of the orchestra.

He does things on the field that Weeden just isn’t capable of, and I’m not talking about just the physical play. I’m talking about running the offense; setting you’re o-lineman up in the correct blocking scheme, and letting your wide receivers know what they should do. There was none of that going on during the last game.

So it wasn’t just the throws or bad decision-making for me, it was the know how or lack thereof that stood out more than anything else.

Yes, this team has had much success running the ball this season, which has led to much success so far for this entire team. One could say the offensive line is the main reason behind it, and indeed that has a lot to do with it. But Tony Romo, with his knowledge of the game, his physical ability to make plays out of nothing, and his ability to carve up a defense, is the main reason this team has had success and will have success going forward.

If people want to think it’s the run game and this offensive line that’s the heartbeat of this team, that’s fine, they can do that. But they're dead wrong.

People often say not to judge one performance on future performances, and I’m usually one of those people who say that. But this team has no shot going forward with this 2014 season if they don’t have #9 under center.

For those that have doubted how important Tony Romo is, I hope the last game gave you a glimpse on how it would be going forward without him. And maybe, just maybe some of you can learn to appreciate what we have in Tony Romo.