The Cowboys suffered another loss in Tuesday’s practice when Tyrone Crawford–the projected starting left end–went down with a right ankle injury. Crawford was carted off the field with his face in his hands and tears streaming down his face.

While we’re still waiting to hear official word and details about the severity of the injury, it sounds like it may not be quite as bad as we all initially thought. Still, one thing is for sure: the Cowboys cannot afford to lose another defensive end before the start of the season.

Due to David Irving, Damontre Moore, and Randy Gregory being suspended and the injury to Tyrone Crawford, as it stands now the Cowboys defensive end depth chart heading into week one looks something like this.

And with all the suspensions and injuries I’m sure Lenny Jones and/or Lewis Neal will find their way on the roster for at least a couple of weeks.

That list is far from pretty, and honestly it scares me.

DeMarcus Lawrence (back), Benson Mayowa (knee), and Charles Tapper (back/hip) are all managing/dealing with injuries. Both Mayowa and Tapper were held out of practice early this week trying to recover from knee swelling and back tightness.

To make matters worse Taco Charlton is off to a slow start to camp and has yet to live up to his first round expectations.

Over the last decade or so, the Cowboys haven’t been very aggressive in the trade market. From time to time they will catch a guy on a practice squad (David Irving) or when things get real ugly, they’ll give up a late round pick for a player (Matt Cassel).

When searching for a trade partner the first thing to look at is what teams around the NFL are currently rebuilding their rosters. The first few teams that come to mind are the New York Jets, the Los Angeles Rams, and the Chicago Bears. 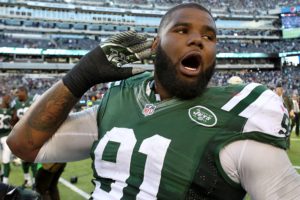 Sheldon Richardson’s name is always brought up around trade deadlines and whenever a player around the league goes down with an injury. Richardson isn’t your prototypical 4-3 defensive end, but could fill in well on the left side of the DL.

Richardson had his worst year of his career in 2016.

With just 1.5 sacks and 38 tackles, Richardson struggled on the field but also had his fair share of struggles off the field as well. Richardson has no problem voicing his opinion and does so almost to a fault.

If the Cowboys want to take a risk on a high risk/high reward kind of player, Sheldon Richardson may be their guy.

The state the Jets are in right now, I believe you could get Richardson for a 2018 second and fourth round pick. With the amount of compensation picks the Cowboys are expected to have in the 2018 NFL Draft these are draft picks I would be more than willing to give up. 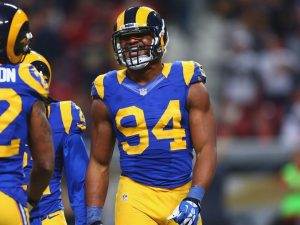 At 27 years old, Quinn still should have plenty of gas left in the tank.

In his six NFL seasons he has posted impressive sack numbers (54.0) and an even more impressive amount of forced fumbles (18). Quinn is your prototypical right defensive end, and would provide juice off the edge like the Cowboys haven’t had since DeMarcus Ware.

With Robert Quinn’s age and the recent decline in production I also believe a 2018 second rounder and a 2019 second rounder could pry Quinn away from the Rams.

If he is fully healthy and at full strength I wouldn’t be completely against giving up a first rounder. Especially if you’re thinking the Cowboys won’t be picking until the back-end of round one like this year’s draft.

The Bears currently have two veteran pass rushers who–if I was Stephen Jones–I would be making calls about immediately.

Lamarr Houston and Willie Young are interesting for a few reasons.

When healthy, both players are very strong pass rushers for the Bears. In his last three years with the Bears, Willie Young has tallied up 24 sacks and 73 tackles as one of the Bears’ better defenders.

Lamarr Houston is probably the better player but hasn’t been able to stay healthy. In his seven-year career, Houston has 25 sacks on his resume, all while not playing a full 16 games since 2013.

The Bears are in complete rebuild mode right now and would probably take whatever they could get for either guy. With their injury history, age, and talent coming up behind them, the Cowboys would be smart to see what it would take to land one of the two talented pass rushers.

I believe a mid round pick in 2018 would be enough to land either one of these guys.

The Cowboys may feel comfortable with what they have now at defensive end and stay put, but I certainly do not.

These guys listed above are options that wouldn’t set the team back financially or take away a lot of draft picks and would provide a positive veteran presence, career success, and some added juice off the edge to try to get this team competing for a Lombardi Trophy.