Unbeknownst to them, Dallas Cowboys fans received almost a complete overhaul of offensive talent a year ago. There was of course 4th Overall Pick Ezekiel Elliott who would go on to lead the league in rushing. There was Dak Prescott, now the starting quarterback for America's Team. And there was a project at Tight End in Rico Gathers. Little did we all know though that some of these guys would dominate the gridiron and the hardwood.

Stop me if you've heard this before, but Rico Gathers played basketball in college! ALSO- Rico Gathers is now a Tight End in the NFL. These two things have served as the ingredients for great careers for guys like Tony Gonzalez, Antonio Gates, and Jimmy Graham. While Cowboys Nation is hopeful that Rico will join that list next, it's his football-playing teammate Ezekiel Elliott that literally joined him in his former natural environment.

In a local pick-up game – we've seen Rico dominate here before – Gathers and Elliott executed the perfect pick and roll. While, as you can see in the video, Zeke gets bumped back a little bit (I gasped the entire time) Gathers finishes strong with a monstrous dunk.

Rico Gathers recently told reporters that the thing people would be most impressed with when they saw him at Training Camp would be his blocking. This leads us all to believe that the next time we see a move similar to this one on the football field that it'll be Rico guiding Ezekiel to the point of scoring.

For now we'll just have to live with highlights of Dallas Cowboys picking, rolling, dunking, and being generally awesome in everything that they do. These days I'd say that's pretty normal for the dudes that wear Stars on their helmets.

They might wanna stay on the practice field if they want to collect their check. Getting hurt in a pick up game don’t get you paid 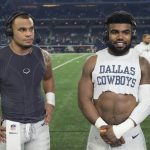 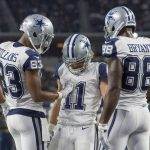