One of the most entertaining parts of training camp is watching the one on ones. Personally, I enjoy seeing the offensive and defensive lines get tough in the trenches, but the skill positions can bring excitement as well.

Yesterday, future Hall of Fame tight end Jason Witten took on Pro Bowl linebacker Sean Lee in a simulated pass situation. Though Sean Lee is the best defensive player on the Cowboys and a stud himself, “Old Man Witt” schooled him a little bit on this rep.

Off the snap, Lee gives Witten an inside release, trying to maintain outside leverage. Witten takes the easy release, but does it only to bait Lee inside before cutting back out and forcing Lee to unexpectedly change direction.

This is a filthy route from Witten, and a big reason why he is still able to play at a high level at his age.

Mind you, Sean Lee is one of the top off ball backers when it comes to covering tight ends, making this win from Witten that much more impressive. 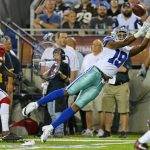 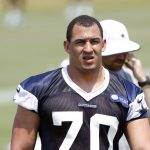