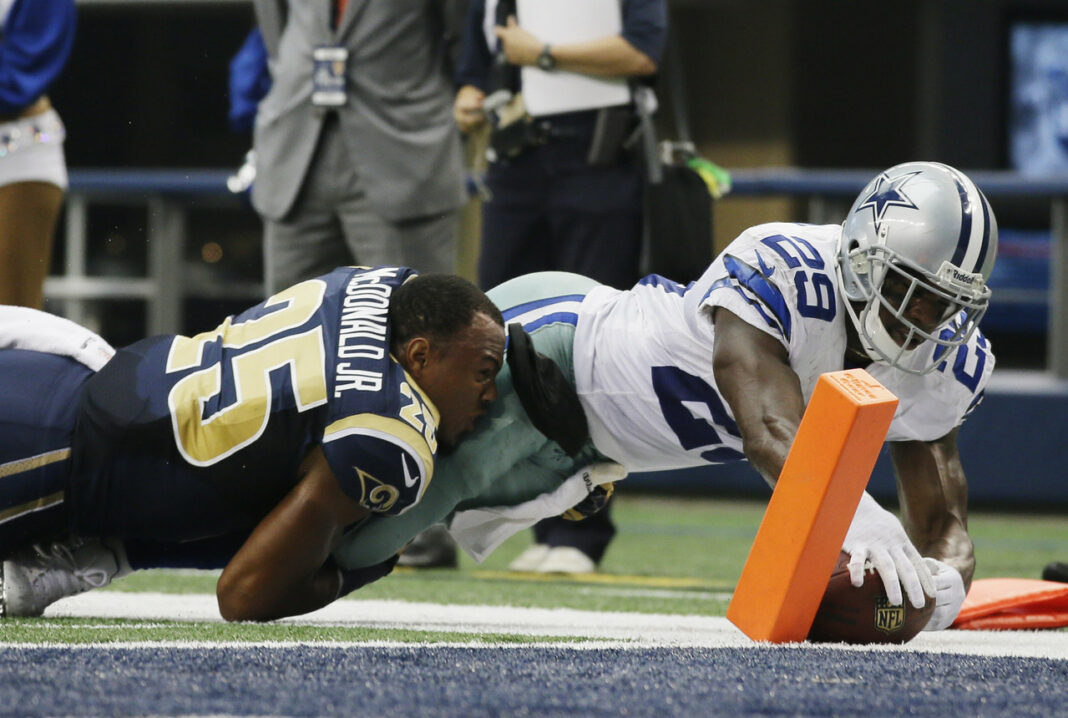 Austin Davis shows good instincts and movement in the pocket to avoid the rush, Davis also shows good accuracy throughout the game against the Bucs.  The Rams opened up the game last week with a good balance of pass and run as the offensive line for the Rams got good push in the run game and nice protection to start the game.

It also helped that the Buc’s all pro DT Gerald McCoy was hurt early in this game. However the Rams were also dealt with a blow from losing Tavon Austin in the second quarter to an injury which will cause him to miss the game against the Cowboys as well.

Look for the Rams to go to Zac Stacey early and often against the Cowboys. They seemed to have the most success when they had a TE or FB line up in the backfield with Stacey to lead the way. One thing I noticed from the Rams was that they seemed to have trouble with pressure up the middle.

Look for Davis to find TE Jarod Cook early and often. Cook is a big athletic TE just like Delanie Walker of the Titans, though he's not as fast. Also watch for WR Brian Quick; he doesn’t have the speed of Tavon Austin but he isn’t slow. He’s big and isn’t afraid to go across the middle.

On a side note, seems like the Cowboys aren’t the only team that likes to pass on third down and one, the Rams, did that on several occasions.

Offensively I came away impressed with Austin Davis. You wouldn’t think – watching him play – he was making his first career start. He wasn’t intimated at all, and he had no problem testing the Bucs defense. If he was going against the Cowboys defense from last year, I would have no doubt he would throw for over 300 yards and a few touchdowns. Although Davis played a great game, you still have to look at who he played against. The Bucs have proven to be one of the worst teams in the league coming out of the gate.

I expect this offense to test the Cowboys defense, especially in the running game.

What about the Rams on defense?

It was supposed to be the strength of the team, and one of the best in the league, but the Rams' defense hasn’t looked like either in 2014.

Bobby Rainey and the Bucs running game had a field-day. From watching the Rams front four, the pursuit of the QB is what cost them the most. That pursuit effort left gaping holes for the Bucs runners and allowed them to get their screen game going as well because of that hard over-pursuit to the QB. I know not having Chris Long hurts their defense, but it shouldn’t hurt them as much it has so far.

In the first half of the game, the Buccaneers' offense did as they pleased, but the Rams did cause a turnover in the second quarter. The Rams also committed stupid penalties on defense; they had two horse-collar tackles and a roughing the passer flag too.

If there was a plus for the Rams defense it was their ability to keep the Bucs out of the end zone.

The Rams seemed to play a ‘bend but don’t break' defense, even if that's not what they intended to do. I believe they just played tougher defense once the Bucs got to their 30 yard line.

Overall the Rams defense was off and on throughout day, but if there is a trend starting for their defense over the first two weeks, it’s their inability to stop the run. And we all remember what’s happened the last two times the Cowboys played the Rams, they ran the ball down their throats.

If the offense can get out on top early and force the Cowboys out of their running game, then the Rams can do what they do best, and that’s rush the passer.

That wouldn’t benefit the Cowboys at all because so far the pass protection seems to be what’s ailing this offense.

Since the Rams have been blown up by DeMarco Murray the last two times he’s played them, and the fact they are having trouble stopping the run, I look for the Rams to play 8 in the box a lot and force Romo to beat them.

The only problem with that so far? Stacking 8 in the box hasn’t been able to stop the Cowboys running game yet this season.