As much as we would like for it to be true, some players in the NFL are just more important to their team's success than others. The Dallas Cowboys of course are no exception. They have more than a few players who are absolutely detrimental to the organization's success or failure this year, but who is “Mr. Indispensable” for the 2019 season?

This may sound like an easy question to the majority of you, but there a lot of factors to take into consideration here. Fortunately, the Dallas Cowboys have a pretty deep roster from top to bottom right now, meaning they are more equipped to handle an injury, or even a suspension, than they have been in years past. We all hope none of these types of situations pop up, but it's better to be prepared just in case.

With that in mind, I thought it would be fun to share with you not only who I believe is “Mr. Indispensable” in 2019, but also the Top 10 most important Dallas Cowboys players this season.

Let's get started with my Top 10 first…

I think there is a difference between most important and “Mr. Indispensable”. You may disagree, but that's your prerogative.

When I think of most important, I think of the players who would be difficult to replace as starters, but not impossible. Think back to last year and what happened with Travis Frederick. Joe Looney was able to step in and help the Cowboys offense pretty much not miss a beat.

That situation could've been detrimental to the Cowboys offense. Just think about what happened in 2017 when Chaz Green and Byron Bell tried to replace an injured Tyron Smith. I still shudder at the thought of those two trying to protect Dak Prescott's blind side.

I just thought that was important for you to know while looking over my Top 10 rankings as far as who I believe are the most important Dallas Cowboys players currently on the roster. It's all about roster depth, and what I personally think the backups are capable of doing as spot starters.

So, after looking over my Top 10 rankings, who do you think I have as “Mr. Indispensable”?

It was probably a dead giveaway based on my Top 10 rankings, but I believe Quarterback Dak Prescott is “Mr. Indispensable” for the Dallas Cowboys in 2019.

There's quite a contingency of Cowboys Nation who don't really care for Dak Prescott as a Dallas Cowboys starting quarterback, but there's no denying just how important he is to the team's success in 2019 and beyond. You should all be hoping and praying he never has to miss any significant time for some reason.

QBs Mike White and Cooper Rush don't exactly inspire a lot of confidence as starting caliber players. If the Dallas Cowboys were forced to turn to one of those two it would probably equate to more than a few losses. That's why we should all be rooting for Dak Prescott to remain healthy this year, regardless of how you feel about them personally. The Dallas Cowboys success depends on it!

Who do you think is “Mr. Indispensable” for the Dallas Cowboys in 2019? 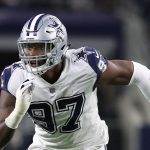 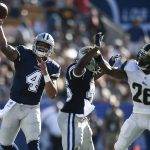