The 2020 NFL Draft is approaching fast. This is one of the most exciting times of the year for football fans as new talent gets added to NFL rosters for the upcoming season

The Dallas Cowboys have several positions that need to be addressed in April, especially on defense. Defensive tackle, safety, and cornerback would probably be the top three positions in my personal opinion that need to be looked at early in the draft, and there’s plenty of productive players for the Cowboys to choose from. Let’s look at three specific prospects that could be available at 17.

Maybe the biggest flaw of the Cowboys defense has been the inability to address the defensive tackle spot. Javon Kinlaw out of South Carolina is an interesting name to watch at 17. At 6’6 and 310 pounds, Kinlaw is an absolute force on the interior defensive line. In 2018, he registered 30 tackles (nine tackles for loss) and four sacks in 10 games. He did even better in 2019 with 35 tackles (six tackles for loss) and six sacks in 12 games, while garnering first-team All-SEC honors.

With Maliek Collins set to hit free agency, Kinlaw could come right in and contribute. He’s big, physical, good against the run, and can get to the quarterback. If you can stop the run and get pressure up the middle you can disrupt any offense. Kinlaw provides all of those things. 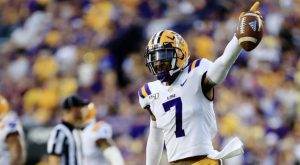 Grant Delpit out of LSU is probably the top safety prospect on the board for the 2020 NFL Draft. In 2017, he was a stud as he racked up 60 tackles, eight passes defended, 3.5 tackles for loss, and an interception. Last season, he put his name at the top of his position in the college ranks with 74 tackles, nine passes defended, 9.5 tackles for loss, five sacks, five interceptions, and a forced fumble. Delpit would be named first-team All-SEC and a Consensus All-American. This season, he was excellent once again with 65 tackles, seven passes defended, 4.5 tackles for loss, two sacks, two interceptions, a forced fumble, and a fumble recovery. In addition to being named first-team All-SEC and a Consensus All-American for the second consecutive season, Delpit also won the Jim Thorpe Award as the nation’s top defensive back.

At 6’3 and 200 pounds, Delpit is the prototype for the safety position in today’s NFL. He’s an excellent tackler with great ball skills, as evident by his eight interceptions and 24 pass break-ups in the last three seasons. Delpit can play down in the box, cover tight ends and slot receivers in man coverage, and has the ability to play the middle of the field in zone coverage, everything you want in a strong safety. The idea of lining him up opposite Xavier Woods is an interesting one. 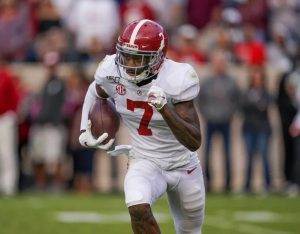 Trevon Diggs out of Alabama is another name to watch at 17. Diggs was having a good 2018 season before suffering a broken foot that sidelined him. He did finish with a respectable 20 tackles, six passes defended, an interception, and a forced fumble. This past season, however, Diggs took it to another level. He finished with 37 tackles, eight passes defended, three interceptions, two fumble recoveries, and a touchdown. Diggs would be named first-team All-SEC for his efforts.

Diggs is a long athletic corner at 6’2 and 205 pounds which is exactly what you want in today’s NFL. He has really good ball skills as he’s racked up four interceptions and 14 pass break-ups over his last two years in Tuscaloosa. Also, his speed and footwork allow him to keep up with smaller, faster receivers. Byron Jones will be a top priority for the Cowboys to keep this offseason as their number one corner, but that’s not guaranteed. Also, when you factor in Chidobe Awuzie’s regression in 2019 and Anthony Brown set to hit the open market, Diggs should be a player to keep an eye on in the first round.

Of course, all of these players could be gone by the time the Cowboys pick at 17, I mean let’s be honest, the NFL Draft us unpredictable. However there’s a chance all three could be there for the taking, and if so, either would be a good fit for the Cowboys going forward.