Now that the NFL Draft has come and gone, it's preseason for Fantasy Footballers the world over. All the rookies have found new homes. We're looking forward to the offseason activities and training camp to see how the depth charts shake out with the new additions. The fantasy football value of several players remained unaffected by the NFL Draft, and that is the three-headed running back monster that sits somewhere in the top-five of everyone's rankings.

It doesn't matter if it's re-draft, keeper, or dynasty league; Ezekiel Elliott, Le'Veon Bell, and David Johnson all sit inside the top-five. So the questions must be asked.

Who is the top running back heading into 2017?

There are a lot of opinions out there, and to be honest, I can see a case being made for all three, but let's take a look at their stats for comparison. 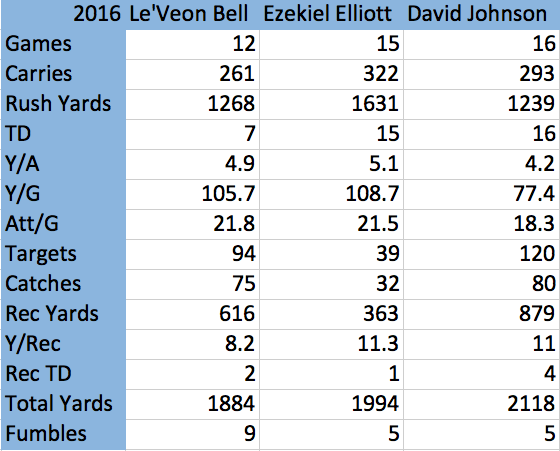 A few Notes from the Table

Looking at the stats above it's easy to see that their respective teams really worked their workhorse running backs in 2016.

Le'Veon Bell's touch rate over a 16-game season would have put him at 448 touches. For reference, in DeMarco Murray's stellar 2014 campaign with the Dallas Cowboys, he touched the ball 449 times. That's a lot of work.

Bell would have led the league in total yards if playing at that pace over a 16 game season.

He's still a young player in the league at age 25 this season. Bell is part of one of the most dynamic offenses in the NFL that is able to throw the ball and run the ball at will against opponents.

His vision, shiftiness in the hole, and ability to break big runs makes him one of the best running backs in the game.

Suspensions and injuries have limited his career impact though, and fantasy owners hope they can finally get a 16-game season from him. 2014 was the only time that he played 16 games in his career.

If you draft him with a top-five pick, you will be happy with your return. He is a RB1 and will deliver RB1 numbers.

He does, however, come with some risk.

His four game suspension in 2016 was his fourth offense, according to the NFL's drug policy. You can read a synopsis of it here from SB Nation. A fifth offense would lead to a 10 game suspension, effectively killing his fantasy value.

The Pittsburgh Steelers did invest in a running back during the 2017 NFL Draft.

University of Pittsburgh running back James Conner was selected in the third round of this year's draft. That is quite an investment in a player that is going to be a backup, unless the team plans on using him.

While Bell is still likely to put up RB1 numbers, I wouldn't plan on him seeing 400 touches in 2017.

David Johnson was 2016's most hotly debated player. And this fantasy analyst fell on the wrong side of that one. I didn't think that we had seen enough from Johnson at the tail end of 2015 to warrant him being a top selection in fantasy drafts.

I guess the bulletin board material I provided really motivated him, because he had an amazing season.

The thing you like about Johnson is his ability to run and catch the ball with a high amount of efficiency. His 4.2 yard per carry number isn't great, but he also plays in a division that has really good defensive fronts in the Los Angeles Rams and Seattle Seahawks. When you have to face those guys twice a year, it's going to be tough sledding.

Where he excels is as a pass catching running back. Targeted 120 times, which ranked him 25th amongst all players in the NFL, his 80 catches were the 20th most in 2016 rankings, ahead of 2015 standouts like Allen Robinson and DeAndre Hopkins.

Johnson was able to find the endzone 20 times last year, and that is a huge number in this day and age of committee running backs and pass first offenses.

Arizona was forced to go to him because their offensive line couldn't hold up in pass protection. Quarterback Carson Palmer was sacked 40 times in 2016, only two less than Tyrod Taylor, who was sacked the most. For reference, Dak Prescott was only sacked 25 times last year. That ranked for 8th fewest among quarterbacks with more than 400 pass attempts.

They couldn't find any consistency at the wide receiver position outside of Larry Fitzgerald, who had another ho-hum 100 catch season. Aside from Fitzgerald, and Johnson's 80 catches, the next most on the team was 39 by WR John Brown, who was battling back from injuries for most of 2016.

All that to say that I don't think Johnson replicates his 120 targets in 2017. Especially if you believe that the Cardinals are going to move former starting running back Andre Ellington to WR. He provides another short to intermediate passing game target for the Cardinals, that will likely eat into Johnson's passing game numbers.

He's another player worthy of the number one overall pick, but I have my concerns that his workload is going to decrease, and therefore I think his numbers will decrease.

You can call this a homer pick if you like. You can talk about all the blue Kool-Aid I'm drinking and you'd be right. I'm a homer and I drink the Kool-Aid.

But before you write this off as a homer pick, let me give you some rationale.

First, let's dispel the notion that Ezekiel Elliott is a product of the offensive line. Yes, his offensive line is great, but Elliott was great as well. He rushed for nearly 1,000 yards after contact last season, according to Pro Football Focus.

The offensive line, though it lost a couple of pieces in Doug Free and Ronald Leary, looks to have players capable of providing a similar level of play in La'el Collins (whether at LG or RT, he'll be a beast in the run game), and a trio of tackles that show promise in Chaz Green, Emmett Cleary, and Byron Bell.

In 2016, Ezekiel Elliott typically only came off the field for a series in the first half and a series in the second half, after a long run, or during a long series for a play or two. Otherwise, he was on the field in all situations because of his ability as a receiver (only one drop on 37 targets) and his ability in pass protection, which was elite already coming out of college.

Elliott — to me — has the clearest path to recreating his touch totals as he is the focal point for the Dallas Cowboys offense. His touches weren't reliant on a passing game scheming him the ball. He was the only running back to carry the ball more than 300 times in 2016, and if the Cowboys staff continues the trend, he will do so again this coming season.

Once Jason Garrett finds a bell cow running back, they feed them the ball. Like DeMarco Murray in 2014, Darren McFadden in 2015 and now Elliott, 300 carries is nearly a given. I also expect to see them utilize him in the passing game more this season as he was very effective in that role and his toughness and tackle breaking ability give Dak Prescott another underneath option to drive the field with.

As mentioned above, Elliott was only 124 total yards behind David Johnson while playing one less game and having 81 fewer passing game targets.

Because I see Elliott's season as the most likely to be reproduced in 2017, plus his passing game share to likely increase, and the touch numbers for Johnson and Bell to decrease, Elliott is my number one overall player in standard, PPR, re-draft, and dynasty leagues this season.

Who is number one for you and why? Let us know in the comment section.

John Williamshttps://anchor.fm/inside-the-cowboys
Dallas Cowboys optimist bringing factual, reasonable takes to Cowboys Nation and the NFL Community. I wasn't always a Cowboys fan, but I got here as quick as I could. Make sure you check out the Inside The Cowboys Podcast featuring John Williams and other analysts following America's Team.
Previous article
Moving La’el Collins To RT Indicates Belief In Cooper at LG
Next article
Cowboys Draft: Scouting 7th Round WR Noah Brown

I am already looking forward to my fantasy football draft. I try not to be biased and draft any Cowboys players unless they are...
Fantasy Football

I wanted to shift gears away from all the draft and schedule coverage to run down a few guys who I think would be... 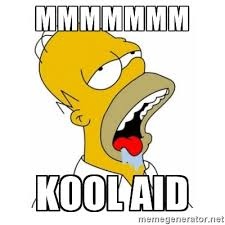