Micah Parsons joined the Dallas Cowboys last night as the 12th-overall pick in the 2021 NFL Draft. With Dallas having spent such significant draft capital on the talented linebacker, does this indicate that 2021 will be the last season for Jaylon Smith or Leighton Vander Esch with the Cowboys?

Linebacker was one of Dallas' top needs going into this draft because of the issues Jaylon and Leighton. We've seen Smith's play decline over the last two seasons, with 2020 showing an especially steep drop, and Vander Esch continues to battle injuries and performance issues in between.

Both veterans are at critical junctures in 2021. Vander Esch's rookie deal will expire after this season unless Dallas picks up the 5th-year option, which they must decide this Monday. Using a 1st-round pick on Parsons is a strong sign that they're not planning on it.

It makes sense; that 2022 salary would be a little over $9 million for Vander Esch and that full amount would count against the salary cap. That's a big chunk for a player whose reliability is currently so questionable.

Jaylon Smith already got his long-term contract but 2022 will offer the first real opportunity to release him and get some cap relief. Dallas can create $5 million in cap space by releasing Smith outright next offseason or $9.2 million if they make him a June-1st cut.

You may be thinking “why not keep all three for the future? There are three starting linebacker spots.” Traditionally, this is true. But in the modern NFL that third LB is really more of the “12th man” on defense as your third cornerback gets way more playing time.

Also, keep in mind that Dallas did add Keanu Neal in free agency last month. While he's been a safety with the Falcons, Neal is reportedly switching to linebacker with the Cowboys and is even listed as one on the team's official website.

So for 2021, Parsons will be rotated with Neal, Smith, and Vander Esch in some fashion as he learns the NFL ropes. We could easily see all four on the field in the base 4-3 scheme and other short-yardage packages with Neal at safety.

But you don't spend the 12th-overall pick on a rotation guy. That may be the rookie-year plan so Micah can develop and the team can assess Jaylon and Leighton for the future. However, decision time will come in the 2022 offseason.

The Cowboys could still retain Vander Esch with a new contract next year even without the 5th-year option. They could also keep Smith on his current deal if his play improves enough to justify his scheduled $11.8 million cap hit in 2022.

Micah Parsons now gives Dallas some leverage to make those decisions. But if the team was rock solid with Smith and Vander Esch going forward, they'd have spent that 1st-round pick on Rashawn Slater or perhaps even tried to move up and grab one of the cornerbacks they desperately need.

The fact they used it on Parsons tells you all need to know about the future of the Smith-Vander Esch duo in Dallas. Unless something bizarre happens this season, one of them will be looking for a new team next year.

Hi Jess. Please, help me out understanding something. I did a very cursory look at the statistics on J. Smith last season. The guy had 152 tackles with over 80 solo, unless I was looking at something else. His numbers were about the best of his career, again, at a glance, since he’s been a Cowboy. But, there is this mantra of “His play has really declined.” Jess, I’m in Tennessee, I don’t have a sports package to see every game and not all games were televised here. What the check am I missing? 152 tackles is pretty darn active. Again, I haven’t looked, did Sean Lee post 150+ tackle seasons? If he did, I don’t remember them. Thanks, sir.

I like the Parsons pick. They need help stopping the run. Still, they need someone to stop those offensive linemen getting to the second level and extending plays. I about $$$$ myself when JJ traded the pick away. Hopefully, he’ll pick someone that might actually see a chance at playing. If he’s got to wheel and deal, get rid of everything from 5th round on and try to get a player. We all know JJ is not going to strike Brady gold with his sixth rounder.

Jess, obviously you have no clue what your talking about? Or your blind? How about focusing on the true weakness of our defense ie…” TANK LAWRENCE,” and the rest of the D line and pass rush. What more would you like Smith to do? 152 tackles with Tank do jack squat the past 2 yrs @ 17 + million per year, Wake up!

Most of those tackles by Smith were 15 yards downfield when he took the wrong angle or just simply didn’t have the quickness or speed to make the play near the line of scrimmage. He was also the most penalized cowboy last year, most of them while embarrassing himself in space while trying to cover RBs and TEs. and a few others boneheaded personal fouls. His tackle total is one of the most misleading stats u will ever see. He was BAD last season.

If you look at the majority of the top tacklers last year they were on losing teams at the bottom in the league in defense. Just like some players are able to rack up stats during garbage time on offense Smith was able to get more tackles because they couldn’t get off the field on 3rd downs!

Hi Gary, thanks for explaining that because that stat line is very, very misleading. Just looking at it, he had a monster year! Like I said, I didn’t have the benefit of a NFL package and a number of times they were not televised here. I just couldn’t understand it. Still, I really think they have got to fix that line. Running backs were blowing right through untouched in the games I did see and we were right near dead last in stopping the run. That being said, it’s too bad that even though J. Smith had a very impressive stat line, his play was probably exposed a bit because of the terrible play up front. Have a good draft tonight. Cheers!

SG, your question is sound and Jay Gs comment about the DL is the better answer than Jaylon Smith is horrible. There are 11 guys on defense so that means if he was making all of those tackles (regardless of location and yards gained) that means the other 10 were not doing there job.
Let’s see what a new scheme, some improved coaching, and the added competition brings. 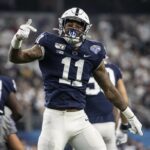 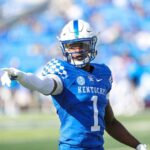