Cautious optimist or stubborn curmudgeon?  Half full or half empty?  Building momentum, or just teasing?

Where do you stand?  I'm still fuzzy on the whats and whys, but I’m leaning positive as I peck away right now.

Amidst a sudden urge to run and a surprising ability to play make-believe defense here and there, our Cowboys remain a mystery wrapped in an enigma inside a puzzle.

Hardly the only NFL team shrouded in questions – hello Packers, 49ers, Saints, Bears, Colts, Broncos, Ravens, Lions, and Patriots – the Cowboys seem unable to jump off the 8-8 treadmill.  I believe it’ll happen this season, but I’m not sure if they’re headed for the stairmaster or the trap door.  Something’s gotta tip this thing one direction or the other.

I think three looming games will do just that, this weekend against the Saints, and two weeks later in Seattle, wrapped around a you'd-better-win game against Houston.

No, that doesn’t mean Dallas has to beat both New Orleans and Seattle to be real.  In fact, the Cowboys don’t have to beat either, although a split would be advisable.  It's critical that Dallas belongs in both games for this season to be anything more than a dress rehearsal for 2016.

There's reason to be optimistic, and here’s why.

The best addition this off-season wasn’t Zack Martin or Rolando McClain.  It was Scott Linehan, and not just because he calls running plays.  Linehan didn’t call running plays in Detroit because the Lions weren’t that good at it, much like the Cowboys for so long.  Garrett, too, would have run more this year because, as he’s stated, it doesn’t require smoke and mirrors to do so like before.  This offensive line can block however you want now, and to either side without deception.

What Linehan brings is a tempo to his play-calling and a different look to his playbook.  Romo isn’t perched in the shotgun nearly as much, and when he is, there’s a newness and multiplicity to what develops from there.  Play-action from under center is much more of a staple, too, which is extremely effective with DeMarco Murray pounding away as he has.

Linehan also isn’t hesitant to feed a beast his food.  Much like with the aptly named Megatron, Linehan will wear Dez out with the ball if it’s there.  Forget balance and spreading the ball around.  If it’s working, do it. Can’t stop Murray?  Here he is again.  Can’t cover Dez?  Prepare for a blitzkrieg of footballs that direction.

As we go on, I hope Dunbar, Escobar, Beasley, Williams, and even Witten become a bigger part of the offense.  But first, somebody’s going to have to stop Murray and Dez because Linehan won’t stop until they do.

The other side of the ball remains a chemistry lab, and Rod Marinelli's juggling Bunsen burners as fast as he can.  It isn’t great, but it’s a much tastier concoction than that slime we fought through last year.

Concerns flow through the linebacker corps, which is going through what the defensive line did last year with musical chairs in the M*A*S*H unit.  A healthy Rolando McClain, Justin Durant, Bruce Carter, and Kyle Wilber would calm the storm quite a bit.

Special teams continue to shine on the leg of Dan Bailey and the stylish locks of Dwayne Harris.  Where would this thing be without those guys?

So this begs for a prediction, so here goes.  I have a good feeling about Sunday night and a Cowboys win, and if that pans out, I also feel like Dallas will play well in a loss in Seattle.  An ugly game Sunday would hint of an 0-3 run, but I don't see that happening.  The key is to get to 4-2 with three home games to follow, and the season will head in the right direction from there; 3-3 doesn’t bode well going forward with a heavy road schedule waiting late.

My optimism lies in the starkly different approach of Linehan, which helps Marinelli and the defense. My pessimism comes from multiple and repetitive blind-folded kicks to the groin in recent years.  Injuries, of course, will have a mighty say in it all. 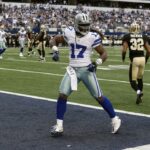 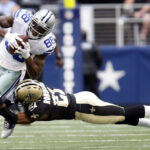