Surprisingly enough, the Wonderlic test results for incoming rookies is still used by quite a few NFL organizations, despite the fact there is really no correlation to how this test translates to on the field production. But, it’s still a fun exercise to discuss even if it doesn’t really hold much credibility when assessing potential prospects.

The Wonderlic test consists of 50 multiple-choice questions that have to be answered in the 12 minute time limit. The perfect Wonderlic score would be a 50. Legendary Cowboys coach Tom Landry was supposedly the first to give this test back in the 1970s and it has continued on ever since.

It is quite possible the Dallas Cowboys put a little bit more credibility on the Wonderlic test since it was Tom Landry who started it all to begin with, but there’s really no way of knowing if that is true or not. I for one don’t really see how a multiple-choice test can help assess a players on the field production, but they are still giving the test for reason. Right?

So, how did the Cowboys’ rookies perform on the Wonderlic test?

Taco Charlton, the Cowboys first-round draft pick in 2017, reportedly scored a 22. For comparison sake, Myles Garrett, the first overall selection for the Cleveland Browns, scored a 31. I wouldn’t read too much into that though, because like I said, I don’t put too much credibility in this test. 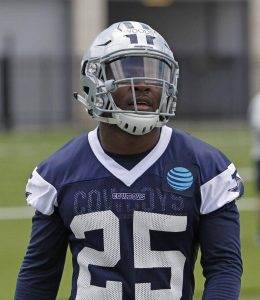 The Dallas Cowboys second round draft pick, Chidobe Awuzie, scored the second highest out of all of the 2017 Cowboys’ draft class, reportedly scoring a 35 on his Wonderlic test.

Unfortunately, the only other Cowboys’ rookie whose Wonderlic test score was available is Xavier Woods, the safety out of Louisiana Tech. Woods reportedly scored a 39, making him the highest scoring Cowboys’ rookie.

It is truly unfortunate the other Wonderlic test results aren’t available for the rest of the Cowboys’ 2017 draft class, but Charlton, Awuzie, and Woods are all expected to play significant roles in their first year in the NFL for Dallas. Maybe their test results will shine a little bit more light on why this test is still given to begin with.

Just in case you’re wondering, the Dallas Cowboys have had players perform pretty well on the Wonderlic test in the past. Ezekiel Elliott reportedly scored a 32 a year ago. Travis Frederick (34) and Byron Jones (33) also scored in the 30s on their Wonderlic tests.

Some other notable scores from current Cowboys’ players: Zack Martin (27), Randy Gregory (28), and Dak Prescott (25). But, the recently retired Tony Romo supposedly has the highest Wonderlic test score among all former Dallas Cowboys with a 37, one point higher than head coach Jason Garrett.

Of course, there are those that have performed badly on the test. Dez Bryant reportedly scored just a 16, but that pales in comparison to Morris Claiborne, who reportedly just scored a 4 on his test.

As you can see, the Wonderlic test results vary from player to player, and there is no proven correlation from the test results to on the field production. But, at this point in the off-season it is still interesting to see how these incoming rookies performed regardless.

Do you put any credibility in the Wonderlic test?