The first few days after a crushing postseason loss are a dangerous time for roster discussion. It’s easy to let the pain of defeat cloud judgment. You’re prone to focusing on the negatives from one game and losing sight of the overall good from the season, or even an entire career. 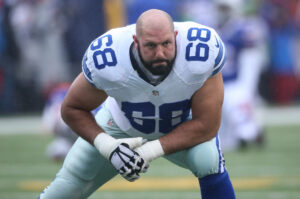 That said, I feel pretty clear-eyed when I say that it’s time for Doug Free to go. The negatives are now outweighing the positives. The level of liability is too great for a team that plans on continuing to be in the Super Bowl discussion.

Last night’s playoff loss to the Green Bay Packers gave us a microcosm of where Doug Free is now as a player. The run blocking was great, helping Ezekiel Elliott rack up 125 yards and a 5.7 average per carry. However, Free’s eternal penchant for penalties and diminishing ability in pass protection were a major detriment to the offense.

If you step back from any single game and look at things from a broader perspective, it’s easy to get comfortable again with Doug Free. He’s a veteran who’s been with you since 2007. Free is a great run blocker on a team that has developed its identity on running the ball. That is no small thing and may have even kept Free with the Cowboys longer than some other teams would’ve had him.

The problem with Free’s overall game, though, is that his weaknesses can end a drive on just a single play. One penalty can put that first-down marker out of reach. One pass-protection breakdown can do the same, or even lead to a turnover. Put the team in a 2nd or 3rd-and-long situation and you’re probably taking the ball out Ezekiel Elliott’s hands and moving the pressure back to Dak Prescott. Now you’ve got to throw it, and now Doug Free is again being relied upon not to draw another flag and to hold up in a clear passing situation.

Essentially, even though he’s great as a run blocker, Free also works against your running game with his mistakes. He can negate a great Elliot run with a penalty, or make it to where you can’t even give Elliott the ball to keep a drive going. We’ve seen it too often over the years, and increasingly so in 2016.

Not only is Doug Free’s play declining but his cap hit is rising. He is scheduled to count $7.5 million against the Cowboys’ cap in 2017. According to Spotrac.com, that is currently the third-highest cap hit for a right tackle.

Dallas can easily shed Free’s contract from a financial standpoint. There is only $2.5 million in dead money from cutting him, which creates a savings of $5 million. That’s a nice chunk of change for the Cowboys as they look to make improvements on their defense.

Granted, they will also have to replace Doug Free at right tackle. This year we saw good things from Chaz Green prior to his injury and solid play from backup Emmett Cleary. Dallas might allow those two to compete for the job while also bringing in a veteran insurance policy for about $1 million. If Dallas does move on, it will mark the end of a polarizing 10-year run for Doug Free as a Cowboy. A fourth-round pick in 2007, Free is the only remaining player from that class. He may actually be the most successful; Anthony Spencer never lived up to his first-round status and guys like James Marten and Isaiah Stanback didn’t last in the league.

Free has played both left and right tackle for the Cowboys over the years. He helped the team transition from the days of Flozell Adams and Marc Colombo, a solid offensive line in its own right, to the incredible group they have now.

Doug’s time in Dallas nearly ended after the 2012 season. He’d had a bad year and was starting to lose ground to backup Jermey Parnell. Free had to accept a pay cut to remain a Cowboy, which he obviously did, and ended up staying for another four seasons.

At this point it’s about more than just money. Having just turned 33-years-old yesterday, Doug Free’s diminishing returns are only going to get worse. He could still start for some teams in the NFL, but the Cowboys have their sights set high with the new nucleus of Dak Prescott, Ezekiel Elliott, and their young bulwarks on the offensive line. There will always be weak links on any football team. Maybe the Cowboys can live with Free’s weaknesses for another year if he agrees to another pay cut. Right now, that’s the only scenario that I think could allow for him to return.

More than likely, though, Dallas will continue their youth movement and look for more upside. They should be able to adequately replace Free and still have money left over to help at other positions. It’s always hard to turn down that opportunity.

Dallas faces a lot of tough decision this offseason. They have plenty of question marks on defense and several key players with expiring contracts. That’s all the more reason to tighten up where you can and create some extra cap space. Free may be the cleanest cap casualty they have on the roster.

Doug Free has started all but five games for the Cowboys since 2010. He’s had ups and downs, being a part of record-breaking seasons for DeMarco Murray and Ezekiel Elliott while also being the team’s most consistent punchline for penalties and mistakes. Other than Jason Witten’s weekly false start call, nobody could draw a flag with more predictability than Free.

Free hasn’t been a joke, though. He went from a fourth-round pick to a decade-long fixture. Longevity doesn’t come easy in the NFL. Anybody who makes it this long deserves our respect.