For the longest time if you wanted to rent a car in the United States, you had to be at least 25 years old. That rule is a bit murky in some parts these days, but if it holds true in your neck of the woods and you were born in 1992 – this is your year!

2017 is also hopefully the year of the Dallas Cowboys as they look to take their Rookie of the Year winning quarterback, Dak Prescott, and stud running back, Ezekiel Elliott, all the way to the promised land in hopes of securing the franchise's sixth Lombardi Trophy.

Many people have compared the sequence that this team is undergoing here in 2016-2017 to 1991-1992 when the Dallas Cowboys were the next big thing, losing in the 1991 Divisional Round to the Detroit Lions before winning Super Bowl XXVII in 1992. Time and time again we've seen this frame of promise thrown on every up-and-coming Dallas Cowboys team in hopes of recapturing the magic from a quarter century ago.

Thanks to the NFL's handy-dandy rotating schedule (instituted during the re-alignment in 2002) we know the exact locations of 14 games of each Dallas Cowboys season between now and the end of time. When the 2016 regular season ended the 2017 opponents became finalized and we found out that America's Team will be playing the AFC West, NFC West, Atlanta Falcons, Green Bay Packers, and of course their NFC East rivals.

Home games for the Cowboys this upcoming season will include the NFC East, Chiefs, Chargers (now LA), Rams (also LA), Seahawks, and Packers. When Dallas hits the road they'll be going to the NFC East, Broncos, Raiders, 49ers, Cardinals, and Falcons. The exact sequence and dates of the schedule won't be known until later this offseason, so all that we know of this season so far is literally this – the opponents.

When Have We Seen This Lineup Before?

Per the NFL's rotating schedule, we obviously know that the Cowboys play the AFC West once every four years and the NFC West once every three. This makes for every three, four, six, eight, you get the idea, years being somewhat similar to its multiples. Prior to 2002 the NFL was shaped a bit differently in terms of divisions and things weren't as neatly organized as they are nowadays.

It's important to know that prior to 1978 the NFL's regular season was only 14 games long, as opposed to the 16-game regular season that we know today. Between 1978 and 2016 we've seen a handful of seasons that bear a striking resemblance to 2017 as far as who the specific opponents are… but one season stands out above the rest in terms of how identical they truly are. 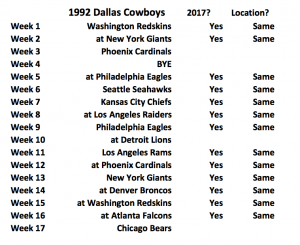 In 1992 the Cowboys – just like they will in 2017 – hosted the Redskins, Seahawks, Chiefs, Eagles, Rams, and Giants while traveled to play the Giants, Eagles, Raiders, Cardinals, Broncos, Redskins, and Falcons. This is 13 identical contests of a possible 16 – a staggering 81.25%.

In the entire history of the Dallas Cowboys we have never seen a season more identical to what we will be seeing this season than when the 1992 Dallas Cowboys played their season which culminated in a win during Super Bowl XXVII. Does this mean that the upcoming season for America's Team is destined to end in confetti and a downtown Dallas parade? Who knows, but if you are looking for a way to re-live the glory days… this is the way to roll.

The Los Angeles Factor: When Things Really Get Crazy 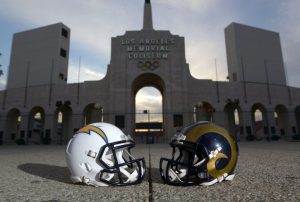 You may have noticed that in 1992 the Cowboys played two Los Angeles franchises, the Rams and Raiders. Obviously the Raiders have since relocated back to Oakland while their is indeed a second team in Los Angeles – the Chargers. Football in Los Angeles is a big reason why Jerry Jones is headed to the Hall of Fame, but the LA connection is another bit of good momentum going Dallas' way in 2017 along these common opponents lines.

The last time that the Dallas Cowboys had a regular season contest against a team based in Los Angeles was indeed the 1992 season. 2017 is literally the first time since then – and remember that this set of games is already 81.25% identical to 1992 – that the Cowboys will play a team from La La Land. Not only will Dallas be playing a Los Angeles team, they'll be playing two… just like they did in 1992.

25 years have come and gone since the Dallas Cowboys won Super Bowl XXVII, but we are seemingly here about to live the season all over again… at least 81.25% of it. While again we must be patient in order to wait for the actual 2017 Dallas Cowboys Schedule, we do know the following facts that will help us get through the offseason:

These are all facts. Do with them what you please. Let's get ready to party like it's 1992.

RJ Ochoahttp://OchoLive.com
I like long walks on the beach, mystery novels, no just kidding those suck. The Dallas Cowboys were put on this earth for us all to love and appreciate. I do that 24/7/365. I also love chicken parmesan. Let's roll. @RJOchoa if you wanna shout!
Previous article
2017 NFL Draft: History Suggests Cowboys Must Address Pass Rush In RD1
Next article
Dallas Cowboys Restructure Tyron Smith And Travis Frederick, Free Up Cap Space

Every year when a new football season begins, Cowboys fans around the world are notorious for believing “this is our year.” To be quite...
Read more
Cowboys News

Yes the title doesn't deceive your eyes, there seems to be a possibility that three NFC East teams could make the playoffs. At the moment,...
Read more

The only thing that is different, is that the Cowboys didn’t play in the inaugural pre-season game at Canton, in 1992. The two teams selected was the New York Jets and the Philadelphia Eagles. I would pump the brakes on this one. No team has won, the Super Bowl, being selected for the pro football hall of fame enshrinement football game. The Cincinnati Bengals, came the closest, losing to the San Francisco 49’ers, in Super Bowl 23, after playing in the inaugural pre-season football game, in 1988, beating the Los Angeles Rams.

I hope you are right RJ, it would be awesome to see the Cowboys, brake the curse, and win the Super Bowl in 2018. Hopefully, since it’s Jerry Jones enshrinement party, maybe the Cowboys will be the first to do so.

Another similarity, in 1992, Al Davis, was elected to the pro football hall of fame, aka Jerry Jones in 2017. Hope, lighting in the bottle, strikes again. How About Dem Cowboys!!!