Last year the Dallas Cowboys overcame a 3-5 hole in the standings to finish 10-6, win the NFC East, and make the playoffs. It was a remarkable turnaround, and one that they will have a hard time repeating in 2019. They can't afford to have another slow start to this upcoming season.

We concede that games that seem easy or difficult now can have a different look once we get into the season. But as things currently stand, Dallas' easiest stretch of games on the 2019 schedule are in the first three weeks.

That's two home games and three opponents likely to be among the softest that the Cowboys see all year. It's an especially good time to get Washington and Miami, who will both be integrating new quarterbacks.

Week 4 is the revenge match with the Saints in New Orleans. From there Dallas faces the Packers, Patriots, Vikings, Rams, and Bears throughout the season, not to mention the two games with the Eagles.

If the Cowboys don't get those easier wins early, the hole may be too deep to dig out of this time.

A big reason for last season's turnaround was the mid-season trade for Amari Cooper. That offensive spark was the catalyst for Dallas 7-1 run to finish the year. The 2019 Cowboys won't have a card like that to play this season.

The importance of those early games is why we're justifiably concerned if Ezekiel Elliott gets any kind of suspension for his recent incident in Las Vegas. Even if it's just a one or two-game wrist slap from Roger Goodell, it comes when the Cowboys are needing to build their cushion for the tough season ahead.

Sure, we'd like to think that Dallas could beat the Giants, Redskins, and Dolphins even without Zeke. But bad memories from 2017 gives us rightful cause for concern.

It's especially concerning with some much uncertainty on the RB depth chart. We don't even have an Alfred Morris or Rod Smith right now to provide a little confidence if Elliott misses time. Only rookie Tony Pollard is sure to make the team, and he's not an every-down back.

Zeke isn't the only player facing a potential early-season suspension, either. Tyrone Crawford could be looking at a few games for his involvement in an offseason bar fight, and Randy Gregory's status in the NFL's substance abuse program is a total mystery.

The Cowboys should still be strong and deep enough to beat those early teams, but this is all based on late-May logic. A lot can happen between now and September.

The 2018 Cowboys had Ezekiel Elliott and still stumbled out of the gates. A repeat of that, Zeke or no Zeke, and this season could be over very quickly. 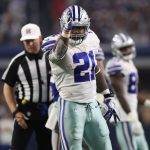 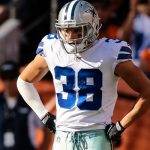