In what could be classified as the Dallas Cowboys best win of the 2018 season over the Detroit Lions on Sunday 26-24. It was a breakout performance from the offensive side of the football that should be a confidence builder for a team that had struggled to have a complete performance in some time.

On the defensive side of the football, however, it wasn’t so complete.

They made the plays that needed to be made in the middle quarters of the game, but really struggled to slow down the Detroit Lions passing attack led by Matthew Stafford and Golden Tate.

Chidobe Awuzie has played some good coverage at times, but for some reason that is the side of the field that teams have begun focusing their passing attack. Awuzie was in the right spots, but was still giving up a lot of receptions. Now to his credit, the Detroit Lions passing game is really good. They feature several really good wide receivers and a really good quarterback, but I think I speak for a lot of us in Cowboys Nation when I say we expected better.

Chidobe Awuzie was the guy that was supposed to come in here and be the Dallas Cowboys’ shut down corner back. As he showed in the preseason, he’s a game-changing player with play making skills. He’s yet to make a significant play on the football through the first four games of the season, but

The safeties, in particular, Kavon Frazier and Jeff Heath have had some difficulties as well.

Russell Wilson throwing left was 7/9 for 119 yards and a touchdown. The other touchdown, which went to the middle of the field, was into Awuzie and Safety Kavon Frazier’s coverage. 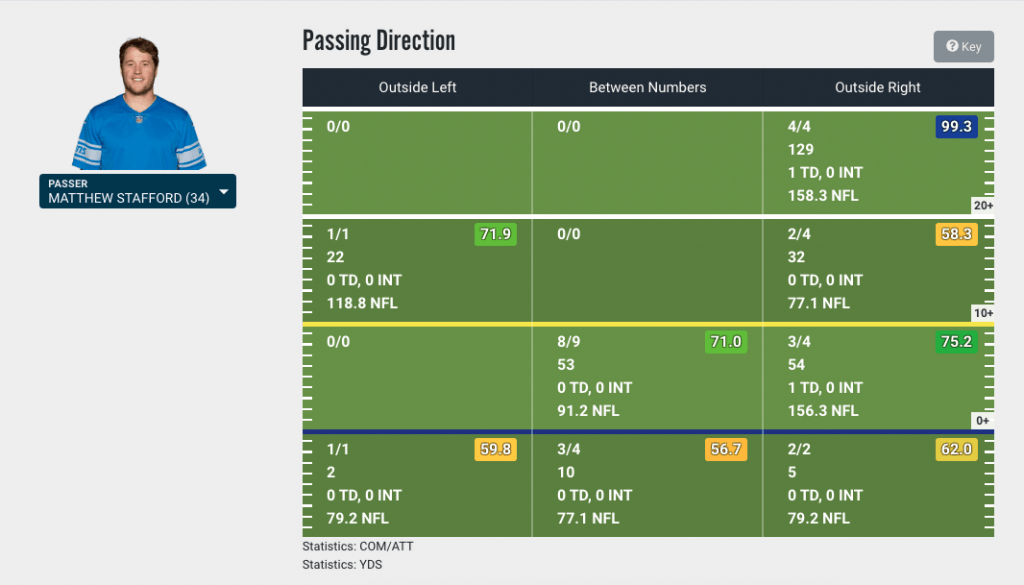 Of Matthew Stafford’s 30 pass attempts, only two (6%) or his attempts went to the defense’s right side of the field. In contrast, he threw 46% of his passing attempts to the defense’s left and beat them for huge gains and both touchdowns.

Byron Jones has locked down the right side of the field in the Cowboys pass defense. So, it seems that teams have begun going to the defense’s left to find success in their passing game. According to Pro Football Focus, Byron Jones wasn’t even targeted in week four. That shows you just how much respect these teams have for the fourth year player.

The Dallas Cowboys pass defense has another huge test coming this Sunday when they travel to Houston to face Deshaun Watson, DeAndre Hopkins, and Will Fuller of the Houston Texans (1-3). Deshaun Watson’s averaging more than 300 yards passing per game for his career, 2.77 touchdowns per game, and completes 62% of his passes.

Rod Marinelli and Kris Richard are going to have to take a hard look at the coverage group and figure out what to do or it could be another long day on the defense’s left side of the field. For the Dallas Cowboys to make a run to the postseason, they can’t give up big plays in the passing game every week.

Chidobe Awuzie and the other defensive backs that play toward that side of the field need to rise to the challenge and start making plays on the football themselves.