Changes to the Dallas Cowboys defense Thursday night sparked one of the better performances of the season from this young unit.

Besides inserting rookie cornerback Chidobe Awuzie into the starting lineup, a move which proved to have a great impact on the defense, allowing safety Kavon Frazier to play increased snaps also heavily impacted the run defense.

With Sean Lee out the Cowboys have struggled mightily against the run, and each level of the defense is to blame. Upfront they lack a butt-kicking one technique that can stuff those interior run lanes. Without Lee, this linebacker group is rather unimpressive, though Anthony Hitchens has had a nice season. And in the back end, safety Byron Jones has been exposed when asked to defend the run in the box.

Back when the Cowboys drafted Frazier, I wrote an extensive film review on how I saw him fitting into their defensive scheme. My conclusion was that he was a bit of a hybrid of their two safeties at the time, Barry Church and JJ Wilcox.

Basically, he can hit. And when asked to come downhill and play the run, Frazier is arguably the best safety on the roster already. His issues have always come in coverage, where he lacks the skills which Byron Jones possesses.

If you could combine the physicality of Kavon Frazier with the athleticism and coverage abilities of Byron Jones, you'd have a heck of a safety in any scheme. Those types of players are rare, however, and Dallas must find ways to mix and match their skill sets in order to optimize this defense.

I still stand by my take that Byron Jones is one of the better players on the Cowboys defense. He is a vital part of stopping Dallas' divisional foes, where he blankets some of the top tight ends in the league for four quarters, six times a year. He also has the ability to be a center-field, rangy safety if asked to do so.

The problem, as Brian Martin pointed out earlier this week, is that he is not asked to do so enough. Because he is so good against tight ends, the coaching staff has asked Byron Jones to play in the box more often. In this role, his lack of physicality has been exposed.

What fans don't understand, however, is that it is okay for him not to be a box player. It's totally fine if he is the free safety playing off the ball and sitting in zone coverage most of the game. He is really good doing that, and should be doing that more often.

If not, I'd be fine with him moving to the slot, where he can excel in man coverage against the opposing offense's most athletic receiving threat. Either way, Byron Jones has a place on this defense going forward, and an important place at that.

Now, back to Kavon Frazier.

These final four games are going to be critical to both his status going forward, and the changes made this offseason to the entire defense. If Frazier can improve in coverage while remaining the impressive tackler he is, I think a starting safety combination of Frazier/Jones with Xavier Woods being designated to the slot would be, for lack of a better word, awesome.

I also think that if Kavon Frazier can continue to play how he did Thursday night, he will at the very least have a JJ Wilcox role on the 2018 Cowboys. Meaning, someone who plays a ton of special teams and gets about 15-20 snaps on defense.

Then of course there is the option of allowing Jones to move into the slot, letting Woods and Frazier lineup as safeties,

The thing to remember is, all things considered, each of these is a good option. But, if there is going to be any change at all moving forward, Kavon Frazier will have to continue to show up during these final four games. If he disappears or regresses, we will be right back to where we were two weeks ago.

Why is it so hard to play Frazier @SS, Jones@ FS, Woods @ Slot, Awuzie@ CB, and Lewis @ CB, this would be awesome!

You are absolutely spot on, that is the most talented group and should receive the bulk of playing time. It’s a shame that it has taken the Cowboys this long to realize this. Their affections for A. Brown, J. Heath and O.Scanrick has hurt the team severely this season. Just play the most talented players in their correct positions for crying out loud!

This home stretch of 2017 is Frazier’s chance to take over SS. I think he knows it and will proceed to do just that.

I can see Woods in the slot, but believe his future is FS. I can see Jones in the slot, but Scandrick is already proven & ideal for it. Jones has the most athletic ability of anyone in the unit except maybe Awuzie. Jones’ draft 40 was around 4.3, and he can leap. I think that’s worth a try outside again, opposite Awuzie. 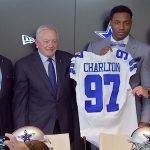 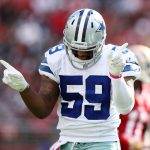