By tomorrow at the latest, Dallas Cowboys RB Ezekiel Elliott will file his official appeal of the six game suspension handed down to him on Friday for a violation of the league's “personal conduct policy“.

This appeal is only a very preliminary first step in Elliott's fight for justice, as this incredibly public battle between the Zeke camp and the NFL became even more heated last night. Before Ezekiel Elliott can take his case to the courts though, he will meet with either Commissioner Roger Goodell or another league official for his appeal hearing.

All signs point to this meeting being the last chance for both sides to settle on any resolution that does not lead to an all-out war over the coming months into the 2017 season.

Roger Goodell himself made even more negative headlines in this saga yesterday, as reports surfaced that he was never in attendance for Elliott's hearings leading up to the suspension that he handed down per Article 46 of the CBA.

Elliott instead met with former NJ Attorney General Peter Harvey, Pro Football Hall of Fame member Ken Houston, Chief Executive Officer of The Women of Color Network Tonya Lovelace, and former United States attorney/Chair of the Securities and Exchange Commission Mary Jo White. The credibility all four of these officials publicly hold in a case like this – which surely demanded a meeting with Tiffany Thompson that also never happened with Goodell – is microscopic compared to the factually based case Ezekiel Elliott and his team of lawyers are building.

Zeke's case here has long been about invalidating any and all erroneous claims from Tiffany Thompson, a summary of which are outlined nicely here by the Star Telegram. Making the most waves yesterday was an alleged message from Thompson to Elliott that, on July 22nd, Elliott was told he was, “a black male athlete,” and that Thompson was “a white girl”:

“They are not going to believe you,” Thompson concluded in a damning statement that will get plenty of air time from Ezekiel Elliott and his representatives over the coming weeks.

My son's legal team is ready to fight! Let's deal!!! You will know the set up and PLOT! pic.twitter.com/GSt7QTJehs

A combination of all of this, including the above public statement from Elliott's father, begs the fair question – is anybody actually supporting the NFL in this case??

Even a Cowboys fan peering through the most silver and blue tinted glasses can admit that the NFL would deserve strong support in dealing with a player legitimately found guilty of domestic violence. Perhaps even this support went by the wayside when the league suspended former Giants kicker Josh Brown just one game back in 2015 though.

Not only is Ezekiel Elliott's case far from that clear-cut, but it points the NFL down a dangerous trail of potentially enabling corrupt victims like Tiffany Thompson down the line. There are few players that work under the spotlight that Zeke does as the star running back for the Dallas Cowboys – likely following this spotlight to a fault at times – but it is not a stretch to say that even the least-known of NFL players can all have a former acquaintance or “Tiffany Thompson” waiting for the NFL to discipline them, not far from being able to use Ezekiel Elliott's suspension dangerously in their favor.

Roger Goodell, with a limited involvement in this high-profile case against one of his game's brightest stars, chose a blatantly incorrect time to stick his foot in the ground and enforce a full six game suspension against Elliott for “personal conduct” – not even hammering home the details of a flawed domestic violence policy.

It truly almost feels as if, depending on who you ask in Cowboys Nation, Elliott stepping onto the field against the Giants to open the season at AT&T Stadium feels like a foregone conclusion to put this story behind everyone for good. Realistically though, Elliott could still be forced to fall on this sword and become the face of some real, needed change in the NFL's enforcement of punishment. It is important to remember that his six game suspension stands until announced otherwise – not until denounced otherwise.

Many of the media members that have been reporting on this Ezekiel Elliott story from the very beginning have warned in the recent days that the official suspension notice was just the start of a story that very well could have a tragic ending for Elliott, Thompson, or Roger Goodell.

It is hard to quantify when “round one” of this fight truly took place, but I believe after yesterday that both sides were sent back to their corners – where Elliott and his team have the NFL right where they want them ahead of an upcoming appeal hearing.

As an interested bystander, I look forward to Zeke getting his day in court (after his NFL appeals are exhausted). If Zeke wins in court, it will clear his name and put an end to this circus.

If he loses, it will hopefully shut up all those fans who believe a Dallas Cowboy can do no wrong and that the NFL is evil incarnate. But of course fans will find other reasons to claim Zeke is innocent.

The NFL’s justice system STINKS!! They can’t even get information on BOTH sides to make a TRUE decision. Now we have an ex-girl friend wannabe and an athlete trying to make a living on his own. Nobody gets it!! Ezekiel did not want to deal with her accusations. NFL screwed by not first getting all the facts from both persons involved. I hope TRUE justice comes out and Ezekiel will be innocent from ALL the information (lies, text messages, witnesses) he presents to the court(s). The NFL IS A BIG JOKE with this. Hope & Pray Goodell gets FIRED!! Mary Jo White is another one that should be FIRED!! SHE IS WISHY WASHY!!

If the NFL made its entire decision just based on Tiffany Thompson word, then Ezekiel Elliott is totally INNOCENT and the NFL has totally SCREWED UP. If the NFL wants to punish Elliott for CONDUCT UNBECOMING then that’s something else that needs to be clarified. It will be totally up to Jerry Jones to warn Elliott that if he screws up one more in public he’s gone. Jerry Jones needs to pull the REINS on all the players. Jones needs to write a very strict CONDUCT Policy and stick to it no matter who the player screws up. Jones needs to be completely FIRM BUT FAIR to the entire Cowboys Organization no exception to the RULES. There is a time and a place for everything but never for screw ups. Like the song on the Beretta Show said, “IF YOU CAN’T DO THE TIME DON’T DO THE CRIME DON’T DO IT”. 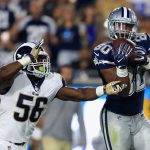 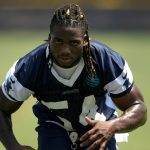