NFL Draft Week – aka Football Christmas – is in theory a time that should be only filled with happiness and forward-leaping career paths. In the day and age of 2017 though, NFL Draft hopefuls are seemingly navigating a field of landmines and trying to survive until they hear their name called. The latest instance of this variety is the allegations against Ohio State Cornerback Gareon Conley.

Teams will now have to thoroughly investigate Gareon Conley situation in a very short time period. Could be completely off many boards.

In the days leading up to the 2015 NFL Draft then LSU Offensive Guard La’el Collins, a projected top 15 pick, was linked to a double homicide investigation in Baton Rouge. While his name was being cleared NFL teams were in the middle of the Draft, terrified of touching him and then in turn being linked themselves. All the while Collins’ agents and representatives were concocting a brilliant plan.

NFL teams were told that if they didn’t draft La’el collins in the second or third round, still a legitimate payday for a rookie, that he’d sit out his entire rookie year and re-enter the Draft in 2016. It was an insane bluff, but would you risk drafting someone with your fourth round pick if he said that he would refuse to play for you?

Collins ultimately went undrafted, which meant that he was not eligible to re-enter the Draft ever again. He was forced to sign as an Undrafted Rookie Free Agent, and as soon as his name was appropriately cleared the Dallas Cowboys Offensive Line became all the more rich. Unfortunately for Collins this tumble costed him millions of dollars in what he would have been paid had he been drafted where his talent merited.

One year after La’el Collins another NFL Draftee Offensive Lineman was managing another crisis, but with far less time to put together a game plan. Ole Miss’ Laremy Tunsil literally had about 15 minutes when his scandal surfaced all across social media… a video of him wearing a gas mask and smoking out of a bong.

In these instances many questions arise: How old is this? Where is this? Is it really Laremy under the mask (answered when he removed the mask)? Could he be punished? What do we do?

As a result Laremy Tunsil, once thought to potentially go number one overall, tumbled all the way down to the Miami Dolphins at 13th Overall. Hardly the financial tragedy that happened to La’el Collins, but you see how these things work.

What Will Happen To Gareon Conley On Draft Day?

It stands to reason that Ohio State’s Gareon Conley will take a significant dive when it comes to his 2017 NFL Draft stock. Prior to this allegation, many believed that Conley would go in the first round. We need to be crystal clear here that this is, at the time of this writing, only an allegation. Nothing is fact at this point.

But that doesn’t matter to NFL teams. If you’re an organization that is about to invest, literally, millions of dollars into a person… they have to be as risk-free as possible. So unfortunately for Gareon Conley, under the presumption of innocence, it isn’t proving said innocence that’s the ask at hand… it’s removing every single shred of doubt from NFL Front Office minds.

How Could Gareon Conley’s Potential Fall Impact The Cowboys? 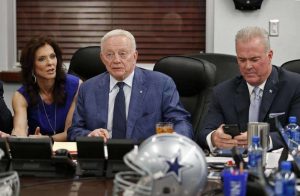 These are the consensus – sorted alphabetically, relax – top cornerbacks in the 2017 NFL Draft:

If you assume that Gareon Conley does indeed plummet down teams’ boards, that’s one less player to be taken before the Dallas Cowboys draft at #28… meaning someone else they potentially like could go.

Cornerback is certainly among the needs that the Dallas Cowboys have entering the Draft, Edge Rush and Safety say hello. The stink surrounding Gareon Conley is extremely impactful to them as it could have been the margin that stretched whoever they covet most to them at #28.

If you’re a Cowboys fan then you should be rooting for this Gareon Conley situation to clear up before the clock starts on the Cleveland Browns on Thursday night. Conley going before the Cowboys means that whoever you want them to take has an even larger chance of being there.

What About The Idea Of The Cowboys Drafting Gareon Conley?

If Gareon Conley experiences a situation closer to La’el Collins than Laremy Tunsil then his agents would be wise to take the route that Collins paved, Ezekiel Elliott does that every Sunday though.

This would mean a bluff that if Conley wasn’t taken in the second or third round that he wouldn’t sign his rookie deal and that he’d re-enter the Draft in 2018. It’d be bold, but it worked out for Collins… right?

The Cowboys’ second and third round picks are the 60th and 92nd ones overall, respectively. If Conley is still there, the point of such talent being available at such a bargain would be one any war room would seriously debate.

It was the 60th Overall Pick in La’el Collins’ Draft that the Cowboys used to select another player of high contentiousness, Randy Gregory. Gregory had a history of drug use, hardly the same thing as the allegations Conley is facing, but the type of talent for that price was a bargain that the Cowboys simply couldn’t pass on.

As we all know, that gamble has seemingly failed when it comes to Randy Gregory. But it was that very same Draft that saw the Cowboys eventually acquire La’el Collins. So which is it? Take the gamble or don’t? In that situation, at #60 or #92, the Cowboys would have to rely on the information that they’d uncovered and believe in it enough to gamble some serious capital. Their history with second round picks isn’t exactly glowing, but the temptation of a home run is hard to deny in those moments.

Overall the Gareon Conley news will undoubtedly impact the Dallas Cowboys in a variety of ways throughout the 2017 NFL Draft. How exactly? Well that remains to be seen.

Tell us what you think about “Will The Gareon Conley Situation Impact The Dallas Cowboys Draft?” in the comments below. You can also email me at RJ.Ochoa@SlantSports.com, or Tweet to me at @RJOchoa!