Will Reinforcements Improve The Cowboys Defense?

I don't really know what the expectations were for the Dallas Cowboys defense heading into the 2017 season, but their performance has likely fallen below those expectations through the first four weeks. We can blame it on injuries, the influx of youth, or the players the Cowboys lost through free agency, but something needs to change and quickly.

Fortunately, there is really nowhere to go except up from here. I mean things of course could get worse, but there has been positive signs that has the arrow trending upwards.

For instance, DeMarcus Lawrence has been absolutely dominant as a pass rusher and a few of the rookies have far exceeded any expectations we probably had for them. Things might not be as bleak as we think.

We are all probably still in shock over what happened against the Los Angeles Rams last week and how the Cowboys defense let the game slip through their fingers. That's only natural, but it's important to remember that this isn't the same Rams team we are used to. They have already won almost as many games as they're used to winning in an entire season, and have looked pretty good doing it. I think it's important to keep that in mind, especially in regards to the Cowboys defense.

Fortunately though, reinforcements are on the way on the defensive side of the ball for the Cowboys. These players should help solidify things in both the running and passing game, and not a moment too soon.

No player is probably more important for the Cowboys defense then linebacker Sean Lee. His absence last week against the Rams really hurt the overall performance of the entire defense. I can almost guarantee that Todd Gurley wouldn't have racked up as many yards on the ground or through the air with #50 in the lineup. Sean Lee is that good!

Sean Lee might not be the only linebacker to return to the lineup. Word is Anthony Hitchens is nearly at full strength and could make his season debut against the Packers. He was making plays all over the field before his injury, and I don't expect that to change once he returns. Of course, the Cowboys coaching staff may decide to hold him out until after their bye week. 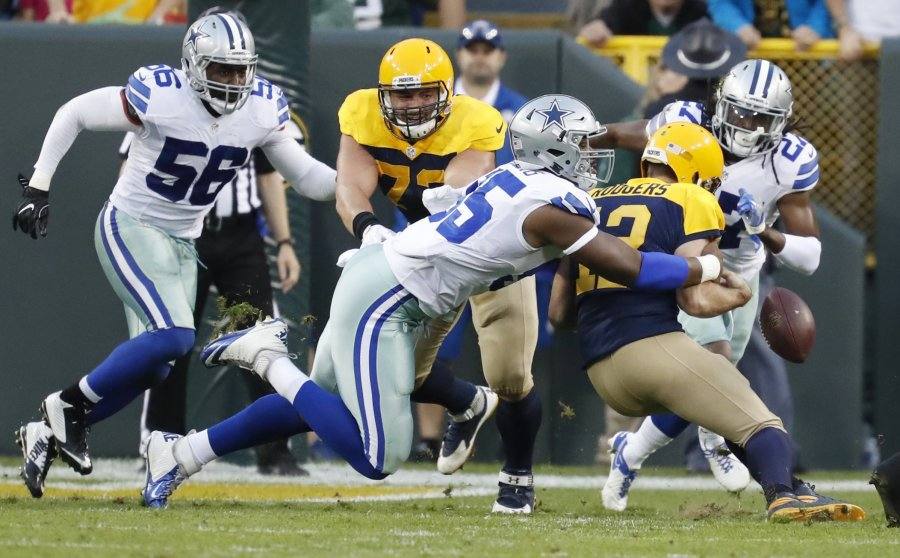 Defensive lineman David Irving will also be able to make his 2017 season debut after serving his four-game suspension. Irving's versatility to play anywhere along the defensive line will be a much-needed boost to the entire unit. One of his best games last year was against the Packers, and you can bet he wants a repeat performance this Sunday.

Reinforcements should also be added to the Cowboy secondary. Nolan Carroll and Chidobe Awuzie are both looking as if they will finally be healthy enough to rejoin the roster this week against the Packers. It's unclear what the roles may be, but having the CB position at full strength against Aaron Rodgers and his pass happy offense is never a bad thing.

Now, there is no way of knowing if the reinforcements for the Cowboys defense will improve the unit or not, but it's important in the fact that they are going to finally be at full strength. The defensive improvement may be hard to notice this week against a high-powered Packers offense, but I believe they will be better nonetheless.

Will the reinforcements improve the Cowboys defense?

If you're a Cowboys fan struggling to find a rooting interest in tonight's Super Bowl, maybe hoping for some former Dallas players to get...
Read more
Cowboys News

It doesn't take much digging when looking at the Dallas Cowboys depth chart that they've got a serious need at the cornerback position. The...
Read more
Cowboys News

Is CB Chidobe Awuzie More Likely to Return or Leave in 2021 Free Agency?

Based on media attention it's starting to feel like the Dallas Cowboys only have one priority free agent for 2021. Of course, Dak Prescott's...
Read more

Nice to see some of those faces coming back, although I frankly would rather see Nolan Carroll off the roster entirely. If we can keep Chido healthy, we can really start to see what our future secondary will be able to accomplish. It may take a game or two for any of the returning guys to make a significant difference, except for Sean Lee, who onl y missed the one game. Hitchens stands to make the biggest impact I think, assuming the level we were seeing in the preseason holds true. Should especially help our run defense a ton! Also give Smith a chance to learn and get better on a more limited basis, which is a good thing I think. Not loving Tapper getting hurt, I think he was going to have to replace Taco on the roster, he was productive in the limited snaps he received. Hopefully Irving gets his game on quickly, as a line up of him, Lawrence, and Collins should be able to ramp up the pressure on the QB’s a lot. Might be time to let Mayowa ride the pine for a game or two, that seemed to properly motivate him last season. We will learn a lot about this defense’s resolve in the next few weeks. Good win this Sunday, and the train is back on the tracks again.

Due to injuries, Carroll has likely been pushed down the depth chart. He might be forced to play a reserve role from now on, which isn’t bad to have considering the youth at the position. He will be overpaid, but he does provide veteran experience. I’m actually really excited to get Awuzie back in the field. I’m a big fan of his and I think he can play any position in the secondary. Sean Lee and Anthony Hitchens are tremendous additions. I’m hoping that David Irving is as well. He can really add a spark to the DL. And I completely agree about Charles Tapper. I thought he would be a difference maker this season.