As a rookie, Connor Williams wasn’t great. He wasn’t bad, either, but there’s no doubt that he didn’t work out as well as many in Cowboys Nation hoped considering the success the front office has had with rookie offensive linemen in recent history. At times, he was dominated by opposing defensive tackles as he did his best at left guard. The 2018 second round pick from the Texas Longhorns started 10 games as a rookie as injuries and veteran Xavier Su’a-Filo kept him on the sidelines for a handful of weeks. However, he finished the season as the starter.

In defense of Connor Williams, who has been criticized by a lot of fans and analysts, many have forgotten about the unit’s struggles under OL coach Paul Alexander. Even with All-Pro talent such as Zack Martin, the Cowboys’ offensive front was having a hard time every Sunday, both in the passing and the running game. 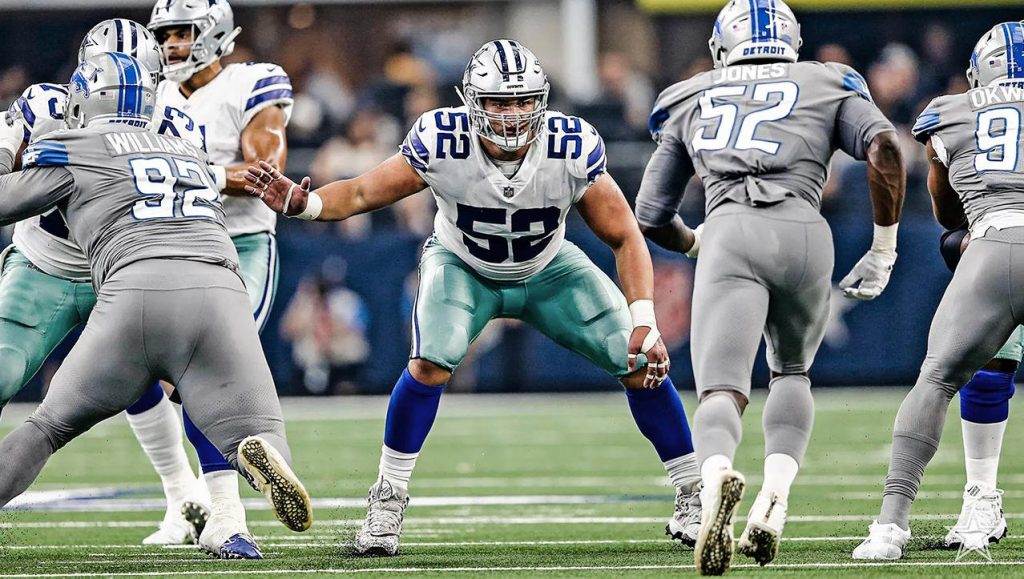 Once he reclaimed the starting role from Su’a-Filo, Marc Colombo was already the position coach after Alexander was fired from the team and his performance was better.

Throughout his first year in the NFL, one of Williams’ main problems was his weight. He simply didn’t have what it takes to properly block the powerful defensive tackles he needed to face in the pros.

In the offseason, Williams made sure to take care of that. According to reports, the young lineman added considerable weight and strength to overcome his weaknesses. It’s easy to note he looks bigger in camp this year.

Bryan Broaddus from DallasCowboys.com has noted the guard’s improvement:

“Williams didn’t have the upper or lower body power to handle that type of a charge. Williams is now equipped to deal with those defensive tackles that play with power. It appears that his newfound strength hasn’t affected his ability to play in space, though.”

Williams didn’t seem to have any kind of competition other than Su’a-Filo to win the starting gig until the Cowboys drafted interior offensive lineman Connor McGovern from Penn State in the third round of the 2019 NFL Draft. The pick was made by the front office because they considered him the best player available at the time.

Despite sounding unlikely, the addition definitely made things more interesting at a position with no clear-cut starter. Specially considering all the different alternatives the Cowboys could explore thanks to Williams’ flexibility to play tackle.

Guard-turned-tackle La’el Collins is entering a contract year, and he has something to prove. With so many Cowboys players waiting to get paid top-dollar, Collins could be a player that doesn’t stay with the team in the long run. Although he’s been a decent starter, he hasn’t proven to be as indispensable as Travis Frederick, Zack Martin or Tyron Smith.

Williams being kicked to the outside and McGovern taking over at left guard should remain a possibility for the Cowboys going forward.

In the time being, though, it sounds like Williams is leaving little space for competition at left guard. His improved size will help him take his game to the next level. It might be difficult for Cowboys’ fans who have been spoiled by many sensational young players at the offensive line to grasp the idea that Williams could develop into a high-quality starter after a season in which he faced plenty of struggles. Not to mention, this time, there will be some guy named Travis Frederick playing to his right.

We’ll see how Connor Williams handles himself during the rest of the preseason, but I’d be surprised if we don’t see #52 in the starting lineup in September.

Tell me what you think about “Cowboys Camp: Connor Williams Leaving Little Room for Competition” in the comments below, or tweet me @MauNFL and let’s talk football! If you like football and are looking for a Dallas Cowboys show in Spanish, don’t miss my weekly Facebook Live! show, Primero Cowboys!