Thanks to their previous six-game winning streak and commanding lead in the NFC East, the Cowboys' pathetic showing against the Denver Broncos can almost be forgiven. The rest of the season will decide how we really feel about the team, but one thing I am sure about after Sunday is that the NFL needs to fix the terrible rule that cost Dallas possession after their blocked punt.

Quick reminder; Denver was up 16-0 after an ugly first half from the Cowboys. The Broncos received the ball to start the third quarter and were immediately forced to punt on a three-and-out, stamped by a Micah Parsons sack.

When Dallas' Malik Turner broke through and blocked Sam Martin's punt, it appeared momentum was about to take a dramatic shift in the Cowboys' favor! Though Nahshon Wright touched the ball and it was recovered by a Denver player, it never crossed the original first-down marker. Everyone thought Dallas was about to get the ball 19 yards from pay dirt.

But nay, the zebras doused the comeback fire as soon as it had been lit.

Because Wright touched the ball beyond the line of scrimmage, the rule dictated that it was essentially the equivalent of a muffed punt. The Broncos' recovery allowed them to retain possession and then Dallas' defense let them chew up the clock on the way to a field goal.

Again, the Cowboys were already losing the game at this point and did plenty more to make that official. This single moment didn't cost Dallas victory, but it brought to light an obscure rule that needs to be fixed immediately.

This rule rewards the kicking team for two consecutive acts of failure. First, they were forced to punt. Second, they allowed that punt to be blocked. It should be much harder to get the ball back after that sequence.

Now if Nahshon Wright had actually grabbed the ball and established possession, then fumbled it, I would have zero problem with how the play unfolded. Even if Denver still hadn't gotten to the first-down marker at that point, that would've been a clear turnover and they'd have deserved the ball.

But Wright barely touches it, trying to make a rapid reaction in an unexpected opportunity. To equate that to a muffed punt, like Cedrick Wilson had earlier in the game, is very imbalanced.

Once Turner blocks the punt, to me that should be a live ball. If Denver ultimately recovers it then fine, have it, but they should still have to at least get it past the same first-down mark as if they'd gone for it on fourth down. Why should they get shorter chains because they couldn't protect their punter?

Rules in sports are all about balance. In this case, you're weighing Wright's brief touching of the ball as a greater sin than allowing the punt to be blocked in the first place. That's clearly not right, and thus it's clearly a bad rule.

In my book, a blocked punt should be unrecoverable by the kicking team unless the receiving team actually takes possession and fumbles. There's too much room for chaos after a block and the team who just pulled off such a rare special teams feat shouldn't be penalized if the ball happens to touch one of their players in the mayhem.

Would I be writing this article if I was a Broncos fan? No, probably not. But if asked I would freely admit that they and any other team got hosed if they were on Dallas' end of that exchange.

For the good of the game, I hope that Stephen Jones raises this issue next time the Competition Committee meets.

Have to agree with you on this one, Jesse. BTW, I don’t think I’ve ever seen that scenario before. Our bad luck.

The refs got it out for the Cowboys, especially since Week called them out

I get the rule somewhat, but yeah, i agree it’s a bad rule, it should be like as if they went for it on 4th down, YOU GOT TO CROSS THE FIRST DOWN NO MATTER WHAT, otherwise this rule benefits the team who punted it, and they shouldn’t benefit from a blocked punt

It’s such a bad rule that almost at this point don’t want to block punts anymore, just try and get the punt and hope to return it

I agree!! This could’ve been the turning point for us, and could’ve changed the momentum to our favor, but instead this stupid rule gave the broncos more momentum and we couldn’t get anything going in our favor after that!! Since Nahshon Wright didn’t possess the ball in that situation, it should’ve been our ball wherever the broncos player touched the ball!! That rule is the dumbest rule I’ve ever seen in the NFL!! They need to change it immediately!! 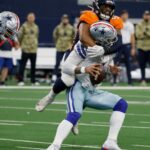 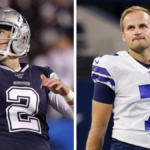