Injuries: An Excuse, Or Grounding The 2020 Cowboys In Reality?

The excuses are everywhere for the 2020 Dallas Cowboys.

Yet this season has been a complete disaster, and it feels like someone has to be to blame. Are the coaches in over their heads? Are the players simply not good enough? Are these the wrong players for the new staff's scheme?

All are valid questions to ask, but the elephant in the room is the incredibly poor injury luck this year's Cowboys have had.

The #Cowboys offense has $58M on IR this season.

They still put up nearly 400 yards of offense on a top-3 defense last night.

I guess I'm wondering why so many believe Mike McCarthy is doing a bad job?

As Marcus Mosher pointed out on Twitter, the Cowboys have nearly $60 million on injured reserve this season. Namely: Dak Prescott, Zack Martin, Tyron Smith, and La'el Collins. Four of the team's best 10 players have been out for basically the entire year, and have not played a single snap together.

When ranking the most important positions on a team, quarterback and each member of the offensive line will be towards the top of that list. And the Cowboys have had disastrous injury luck at all six of those spots.

Even more down the roster guys have suffered meaningful injuries. Offensively, the Cowboys are missing who they thought would be their breakout tight end in Blake Jarwin. Defensively, their secondary has been on and off IR all season, including starters Chidobe Awuzie and Trevon Diggs.

This team has been ravaged by injuries in a way that you could've never predicted. Fans don't want to hear it, though.

Plenty of teams are dealing with injuries, but few teams look as lost and defeated as the Cowboys have most weeks this season.

Take their division rivals, the New York Giants, for example. They too are dealing with a brand new coaching staff in this pandemic affected season, and without their star running back and starting quarterback they found a way to win at Seattle last week. 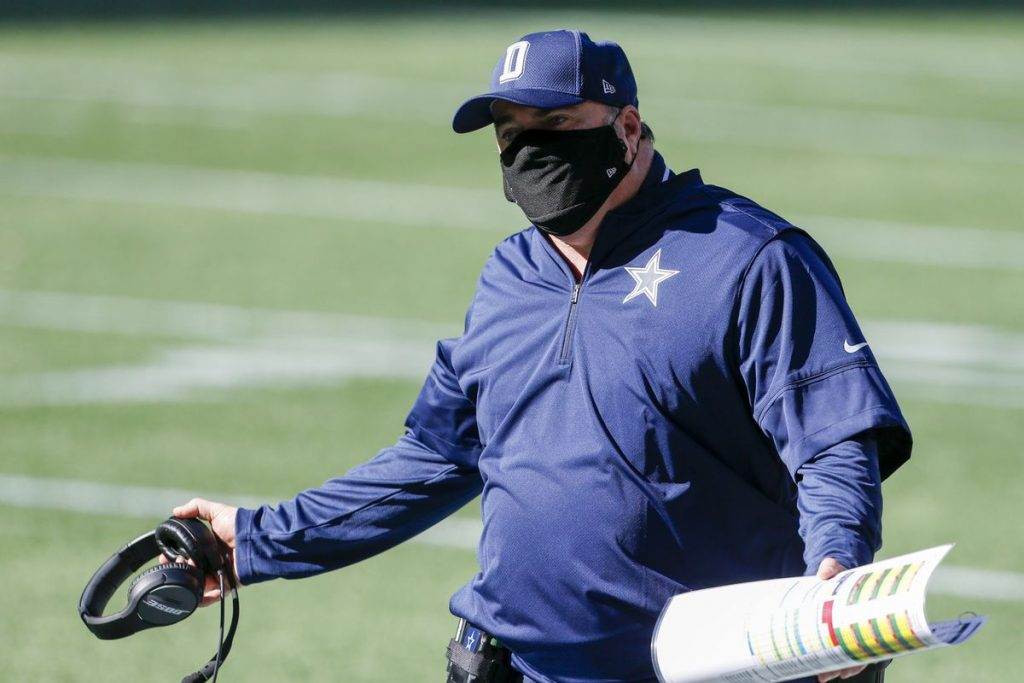 Washington also pulled a major road upset over the previously unbeaten Steelers last Monday, and technically they are down to their third quarterback on the season (though to be fair, he may be their best option).

The 49ers have lost Jimmy Garoppolo, Nick Bosa, and George Kittle just to name a few. And yet they beat the NFC West leading Rams two weeks ago, and have stayed competitive nearly every week.

So are these injuries an excuse, or just the brutal reality?

For starters, Dak Prescott is much better and clearly more important than the prior quarterbacks mentioned in this piece. The drop off from Prescott to his backups is a hell of a cliff, whereas Colt McCoy and Daniel Jones may not be too far off right now.

But let's stick with the Giants comparison for a minute. Who on this Cowboys defense is better than James Bradberry at cornerback? Which healthy safety is playing better than Jabrill Peppers? Outside of the dominant DeMarcus Lawrence, which defensive lineman is playing better than Leonard Williams? How about out in Washington – do the Cowboys have a Jonathan Allen on the interior of their defense?

This defense needs to improve drastically up the middle: defensive tackle, linebacker, and safety. They could also use a cornerback to start opposite Diggs next season. If they can pull together a few defensive pieces, and keep their offense healthy, this is probably a playoff team in 2021.

I know, it feels a little crazy.

But this division still isn't great. To be honest, if just Dak Prescott was healthy they are likely pulling away from the pack in the NFC East by now.

So while there's plenty to blame in Dallas, we cannot ignore the situation these offensive injuries have put Mike McCarthy in.

Kevin Bradyhttps://kevinrobertbrady.wordpress.com
Die-hard Cowboys fan from the Northeast, so you know I am here to defend the 'boys whenever necessary. Began writing for a WordPress Cowboys Blog, and have been with ITS since 2016.
Previous article
Cowboys Select LB Jaylon Smith As Their Walter Payton Man Of The Year Nominee
Next article
Will Giovani Bernard be the Next RB to Torch Dallas Cowboys Defense?

On Tuesday, as a guest on The Dan Patrick Show, Albert Breer revealed that things "weren't great" between the Cowboys' former Offensive Coordinator Kellen...
Cowboys News

When teams win in spite of alot of injuries, that usually means great coaching. The ability to adjust and keep the players motivated when things look bleak. This cowboys team looks deflated. If we get behind in the score they just appear to wilt right before our eyes. To me that is leadership and coaching. Losing Dak was obviously a blow production and leadership wise, but this coaching staff has been unable to make the necessary adjustments to instill confidence in the team that they can win.

Obviously we have sustained an unprecedented amount of injuries this season. If ever a case of Murphys Law applied to a team, it’s this one. But you don’t stop fighting. The habits and culture applied for the rest of the yr will carry over into next season. They need to hold their head up high and fight and scratch and claw. Show what they are made of.

But if X Woods has another game like the last, I would would cut him on the spot. He was avoiding contact/tackles the whole game. Remember he was the one that said NFL players can’t be expected to go 100% every play. Really? It’s the soft players like him, that need to be weeded out of this team. We need some junk yard dogs that are tough and wear that star on the helmet with pride.

Have to disagree ! Even if we had Dak our defense is so bad that they would keep the other teams in the running for a division title! We have the playmakers on the team now to win BUT they are not being Utilized or should I say put in where they can make plays! You have to adapt your defense to the personnel you have!! It’s not the X and O’s it’s the Jim and Joe’s!

No.
McCarthy through his risk taking calls has put the Boys out of three games. That is inexcusable.
McCarthy has allowed Nolan to continue to use a defense scheme that it is obvious these players cannot play.
That is coaching failure.
The injuries have shown the opposite of what this article argues. Because of injuries, the Boys talent has decreased so coaching and scheme became more critical. McCarthy and Nolan have totally failed to maximize players function and have through foolish risk taking collapsed the team in several games.
Bad coaching is bad coaching and having less talent makes bad coaching obvious.

Not going to rehash AGAIN what I think about Prescott, despite another article trying to convince readers that “if just he were healthy” we would be “pulling away”. This idea that ONLY DP can lead us to WINS is LUDICROUS and counter productive. Maybe this defeatist mentality has permeated into some of the players themselves. Example, read an previous article HERE, about competitors, Philly Brandon Graham in particular, saying Amari Cooper’s body language was “BAD”, and he was “GONE”, “He’s like, man, I can’t wait until Prescott gets back” “That’s the type of face he had”. Is/was this part of the problem???

Agree with Gary b, X Woods should be gone. We need more players like Michael Irvin or Randy White. No greater competitors.

Look, we got rid of Garrett last year, because HE WAS THE PROBLEM. Now many are saying this Coachng staff SUCKS. How many times do we go to that well. I do think we should stay with ONE defense set, 4-3. Switching back and forth can cause CONFUSION and MISSED assignments, which is deadly on defense side

The loss of M Collins, R Quinn, B Jones, and J Health were a MUCH BIGGER LOSS THAN MOST REALIZE AND CANNOT BE DISCOUNTED.

OUR BEST DT, OUR 2nd BEST? DE, OUR BEST CB, AND STARTING SAFETY, ALL GONE.

LET THAT SINK IN WHEN WE LOOK AT OUR HORRIBLE DEFENSE NOW.

AD has played well, hence the quote from Moser, about the 400 yds put up against top 3 defense. Not saying he is as good as DP, but CERTAINLY NOT the “HELL OF A CLIFF” difference that the article states.

Moving forward and looking into next year, we need to draft DTs that can FILL GAPS, HOLD THE POINT, STUFF THE RUN.
T Slaton, T Shelvin, J Davis, J Johnson.

Secondly, we need to draft LBs that can DIAGNOSE, STACK, SHED AND TACKLE. Sean Lee was good at this at one point in his career. Great player and competitor, but injuries took off his shine somewhat. Still loved his play, especially early on.
Parsons, D Moses, P Fisher, E Thompson.

Third, we need to draft SAFETIES that can not only cover well enough, but ALSO HAVE THE INSTINCTS TO KNOW WHEN TO COME UP TO THE LINE AND MAKE TACKLES.
SAF, P Ford, H Nasirildeen.

Likely the coaching staff minus Nolan is afforded a reboot, given the fact that some ( but not all) of the circumstances leading to this disaster of a season was beyond their control. Get everybody back healthy, and continue to replenish this roster with young talent by nailing this draft like we did the last one. This season was just not to be. The football gods conspired against us from the beginning.

Hopefully the law of averages evens out for us and we catch some breaks next year. But again keep fighting and reinforcing the habits that you want to carry over into next season. Don’t give into complacency and apathy.