As the Dallas Cowboys undergo a sweeping change in their coaching staff, the impact to the current roster remains to be seen. Some players will be helped and others hurt by the changes, so what about the intriguing tight end prospect Blake Jarwin? How will these changes affect him in 2020?

Jarwin dealt with a big surprise last offseason when Cowboys legend Jason Witten decided to return to the team after a year in retirement. After a hot end to the 2018 season, Blake was seen as a potential starting option going into the offseason.

But Witten’s return kept Jarwin in a minor role on the offense. Blake’s snap count total stayed relatively even at 38% compared to 35% in 2018.

Now there’s a new coaching regime in town. Mike McCarthy doesn’t have any loyalty to Jason Witten like Jason Garrett did; how could that change things for Blake Jarwin?

Witten isn’t under contract for 2020. While he hasn’t stated officially if he plans to keep playing or not, there’s a chance that McCarthy wouldn’t welcome him back to Dallas. As legendary as Jason is to the Cowboys and the NFL as a whole, his current effectiveness leaves much to be desired.

Of course, moving on from Witten doesn’t mean moving to Blake Jarwin. The Cowboys could look to free agency or the draft if they think they need more talent.

However, there’s reason to think that the new coaching staff might have even more interest in Jarwin than the previous one. 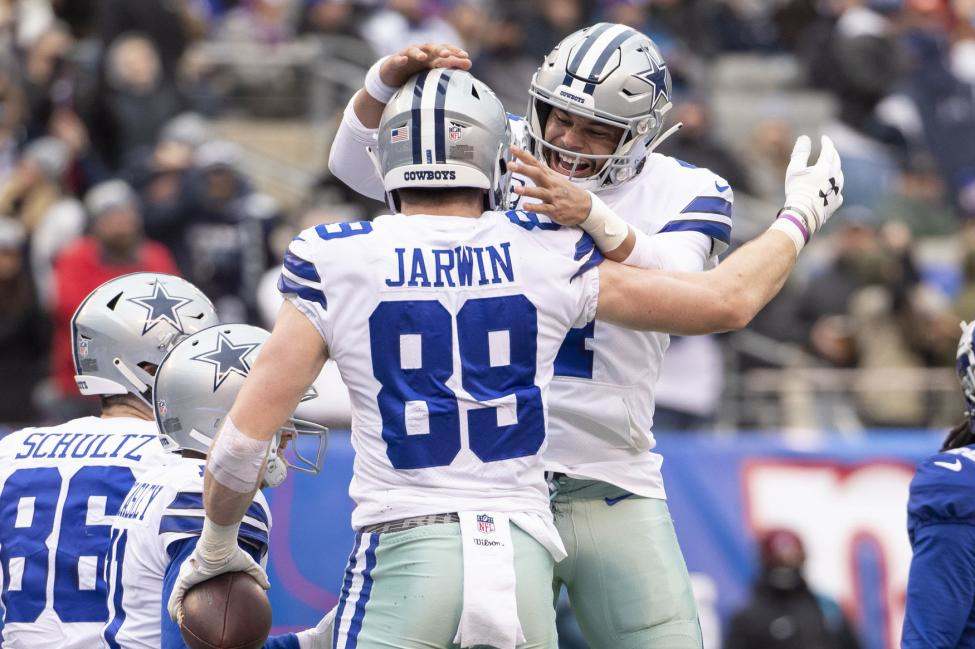 During his time in Green Bay, Mike McCarthy drafted or signed big, athletic tight ends like Jermichael Finley, Jared Cook, and Jimmy Graham. He seemed to value size and speed in the passing game from his tight ends.

That’s certainly not a unique trait for NFL coaches, but the Cowboys have put a pretty high priority on run-blocking ability through the Garrett years. It’s why Gavin Escobar, despite being a 2nd-round pick in 2013, could barely get on the field for four years.

The Cowboys will need to make a move to retain Jarwin’s services in 2020. He is scheduled to be a restricted free agent, having just three accrued seasons so far in his NFL career.

Jarwin went undrafted in 2017 so the Cowboys may need to use the 2nd-round RFA tender to keep him. That would mean bumping his salary up to around $3.2 million according to current projections, which isn’t cheap for a backup.

Blake’s future in Dallas is definitely going to depend on how McCarthy sees him fitting into the offense. The price tag won’t be bad if Jarwin’s seen as a true contender for playing time, but any doubts about his scheme fit or skills might push Dallas toward just bringing in some fresh faces.

At the very least, it appears the Cowboys are headed toward a fresh start at tight end from the Jason Witten Era. We’ll find out in time if the future involves Blake Jarwin.