Jerry Jones Gets Emotional Over Jimmy Johnson, Blames Himself for Split

It’s been one of the most talked-about situations in the history of the NFL and the Dallas Cowboys. Why did team Owner Jerry Jones and former Head Coach Jimmy Johnson split after winning back-to-back Super Bowl championships in 1992 and 1993?

Although the Cowboys won another Super Bowl in 1995 with Barry Switzer at the helm, the parting of ways between Jones and Johnson has been seen as the tone-setter for the last quarter-century of unfulfilled Super Bowl aspirations in Dallas. At the Cowboys opening press conference in Oxnard, California where they will hold the first leg of training camp, Jones talked about how he should have done things differently with Johnson.

“My role here, it was my job to keep it together and should have had deference to something that was working good, those are the things that come to my mind. We had a great run of it. He’s a great coach, and I’m proud to have him as a friend and proud to have the times that we had. We just had a great experience,” an emotional Jones said.

It isn’t hard to understand why Jones would tear up when talking about Johnson when you explore the depths of their relationship. It started back in the 1960s when they were roommates while playing football at the University of Arkansas and won the 1964 National Championship together.

When Jones bought the Cowboys in 1989, he hired his college teammate as head coach, which lasted for five seasons.

Their first season together with the Cowboys was a nightmare, to say the least. Despite landing future Hall of Fame quarterback Troy Aikman, the team went 1-15. Amid this terrible season, the Cowboys executed the biggest trade in NFL history on October 12, 1989, when they sent Running Back Hershel Walker to the Minnesota Vikings. Including a transaction involving the then San Diego Chargers, the deal included 18 players and draft picks.

The Cowboys used those picks over the next three years to bring in Hall of Famer Emmitt Smith, Darren Woodson, Alvin Harper, Erik Williams, Leon Lett, Russell Maryland, and others to set the foundation for their dynasty of the 1990s which included four consecutive NFC Championship Game appearances and three Super Bowl titles from 1992 to 1995.

Jones also spoke about the aforementioned Switzer during the press conference on Wednesday. Less than 24 hours after Johnson stepped down as head coach in 1994, Jones hired Switzer as the new Cowboys head coach. However, the first thing Switzer wanted to know when he came into the office was where was Johnson.

That’s a very unusual thing for a new coach to want to know where the man whose job he’s taking over is, but it makes sense when you peel back the layers of that particular situation. Switzer was a coach at Arkansas when Jones and Johnson played their so the relationship between the three runs deep.

That didn’t sit well with Switzer, who again wanted to know Johnson’s whereabouts.

Jones went on to talk about how perplexed he was at Switzer's request, and the blunt response he got when he mentioned it to Switzer.

“I said, ‘Barry, Jimmy's gone. We're sitting here talking about you being the coach.' I said, ‘What in the world are you so anxious to talk to Jimmy about?' Switzer responded with, ‘I wanted to get both you a—holes on this couch and ask you both how could you f—k this up.'”

Jones was asked could he answer Switzer's question today, and he admitted he couldn't.

Johnson felt that Jones wanted too much credit for the success of the Cowboys during his five-year stint with the organization. Jones, on the other hand, believed that Johnson was disloyal to him for his unwillingness to give said credit. For over 20 years, the bad blood between the two was undeniable despite their incredible success together. 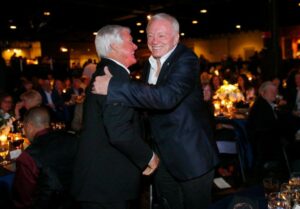 Their relationship has turned a corner it seems like over the last several years. During the Cowboy's 25th anniversary celebration of their Super Bowl XXVII victory over the Buffalo Bills at Gilley's in Dallas in February of 2017, Jones mentioned that his relationship with Johnson was in a good place.

“Yes it is good with Jimmy Johnson,” Jones said. “It's very good. Jimmy and I really understand the circumstances. To some degree, we have a good feel for each other. I've always had to overlook his foils. But he's had to overlook mine too.”

“I talked to Jerry at the Super Bowl and congratulated him on going into the Hall of Fame,” Johnson said. “I talked to the media prior to that and I said without question he deserves to be in there. You look at the impact he has made on the NFL since he's been in the league; the value of every franchise can be attributed really to Jerry Jones. His passion, his work ethic, and what he's done for the league he deserved to be in there and I'm happy for him.”

Nearly 30 years after this infamous split, many still wonder what could have been if Johnson never stepped down. That answer will never be known, but one thing is for certain, Jones and Johnson made history together and will forever be linked when it comes to the Cowboys.

The Dallas Cowboys have been overcoming the odds since Week 2 of this season. After a poor showing in Week 1, even some of...
Read more
Cowboys News

All of a sudden the Cowboys have won three straight games and sit at 3-1 after a nightmare start week one against Tampa Bay...
Read more

I never knew Barry Switzer was so smart.
If only it had not taken Jerry 25 year to realize the smartest man in the room was the one asking the key question.

Wow! I was never a Switzer fan because, well need I really explain… . However, my respect for Barry has just gone up more than I could have ever imagined.

He had nothing to do with th Dynasty. It was All Jimmy!

Well at least he acknowledged he effed up, but there again though, actions speak louder than words, and i still haven’t seen Jerry make a effort to change and get a good GM instead of being the GM, or bring a truly qualified HC in, not puppets,

Till then, this means nothing to me

Good article. I commented previous about how JJ being the owner AND the GM was/is a problem. We need a smart, strong GM that could stand up to JJ. But that may never happen as long as JJ is on the scene.

So we have 25 long years now with no SBs, and despite all the hype about this current team, with all these overpaid (thanks to JJ) underperformers, hate to say it, but I don’t see it happening anytime soon. Not enough HUNGRY players. Too many looking to build their brands and getting endorsement money, instead of concentrating on winning football games. Hope I’m wrong, but…

I learned surprising information concerning Jerry, Jimmy, and Barry.
What didn’t surprise is the depth of arrogance on full display by Jerry, even now.
The last twenty-five years should never have happened.
Yet, really what did Jerry learn? Just look at the Cowboys of 2021….
Cowboy fan are at the same position they were at when Jerry fired Jimmy.
A ship void of direction, team focus, and commitment to winning.
How sad, so sad….