The Dallas Cowboys played most of last season without either starting tackle or Dak Prescott, something they overcame to win six games and remain competitive in a weak NFC East. With Prescott back in the lineup on Sunday after missing last week's game at Minnesota, the loss of Tyron Smith at LT spoiled Prescott's return as the entire Cowboys offense was held scoreless until the fourth quarter.

For a team averaging 34.2 points per game at home this season, the Broncos flipped the script on how the Cowboys reached 6-1. Instead of being forced to throw against Trevon Diggs and the Cowboys secondary, Denver was able to stick with their run game to frustrate Dallas – picking on Diggs in coverage when they wanted to as well.

The extent of which the Broncos defense was either aided by a poor game from Kellen Moore's offense or legitimately slowed the Cowboys down can be discussed in more detail later in the week. For now, the Cowboys will look to move on from this loss as quickly as possible, starting with these immediate takeaways.

The absence of Tyron Smith was felt on the Cowboys first drive, when Ezekiel Elliott was stopped on fourth down. If the Cowboys had Smith at left tackle with Dalton Schultz lined up next to him, the Broncos defense may have respected the threat of a pass out of this tight formation more. Instead, Schultz was clearly in to help Terence Steele, and the Cowboys did not have a receiver out wide for this play. Safety Justin Simmons crashed the play and stopped Elliott.

The Cowboys defense forced the Broncos backwards on the ensuing drive, creating ten tackles for loss on the game, all of which went to waste as the offense sputtered. 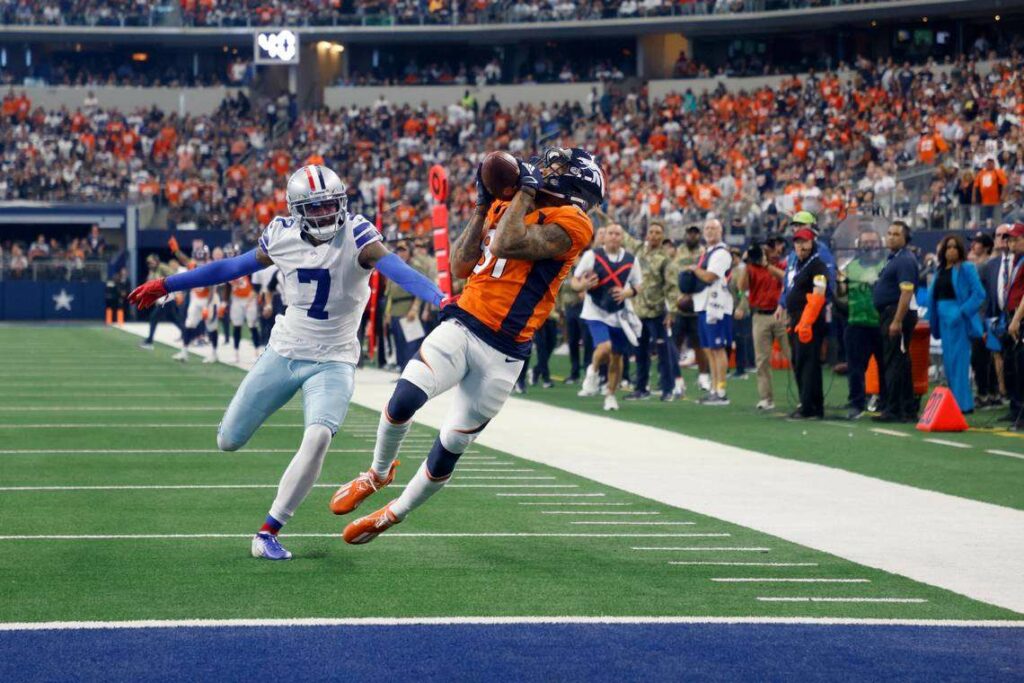 Trevon Diggs could have been in better position on his third-and-goal pass interference penalty that led to a Broncos touchdown. Diggs had inside help from Jayron Kearse, but still played the route by Courtland Sutton with inside leverage. Sutton held off Diggs and forced the defender to play through him, drawing the penalty. The Cowboys failed to convert on third and short on the next drive, punting the ball back to Teddy Bridgewater who threw a 44-yard touchdown to Tim Patrick against Diggs for a 13-0 Denver lead.

Amari Cooper's drop that led to another turnover on downs in the third quarter was the perfect example of the Cowboys losing focus in this game. Cooper is one of the most sure-handed receivers in the league, and could have had a big gain on this play if he held on. Prescott missed CeeDee Lamb on another deep shot on fourth down the next play. It was Lamb himself that said postgame the Cowboys practices leading up to this game weren't “crisp”, as he and Prescott failed to get their timing down.

It's plays like this the Cowboys can point to when disclaiming that the Broncos had the 6-2 NFC East leaders figured out. Losing to an AFC opponent in the same week as Philadelphia and Green Bay lost keeps the Cowboys goals of the division title and number one seed ahead of them. They'll need to not overlook the Atlanta Falcons to keep things this way, making their return to AT&T Stadium after last year's epic collapse at the Cowboys.

Atlanta went into New Orleans and beat the Saints 27-25 on Sunday.