The Dallas Cowboys didn't look like they did during their five game winning streak when they entered Lucas Oil Stadium to face a hot Indianapolis Colts team. In fact, they had one of their poorest showings of all season, failing to score a single point all game. Heading home after being shutout 23-0, there isn't much to be said about the Cowboys' performance.

Here's this week's Takeaway Tuesday. This time, instead of talking about many takeaways, I needed to get one big takeaway off my chest. I hope you enjoy. Make sure to let me know how you feel about this topic in the comments section below or tweet me @MauNFL.

Scott Linehan's Job Shouldn't Be Guaranteed Going into the Playoffs

As tough as it is to fire one of your three main coaches when your team is headed into the postseason, the Dallas Cowboys should not rule out moving on from Scott Linehan. One win away from clinching the NFC East, it's not something you easily pull off but Linehan's play calling has been terrible all year long.

The truth is, despite Dak Prescott's struggles and a disastrous offensive line, the offense shouldn't be as inefficient as it is.

Watching a unit that counts with Amari Cooper, Michael Gallup and Ezekiel Elliott run a screen pass to Allen Hurns on fourth down and 14 was truly a microcosm of what this year has been for the offense.

Despite having a playoff berth practically clinched, the Cowboys should consider a change at offensive coordinator. Even if they don't fire Linehan, it's clear his play-calling is not good and could cost this team a real opportunity at a legit shot in the postseason. It would be an aggressive measure, without a doubt. The Minnesota Vikings did something similar by firing John DeFillippo a week ago. Based on their 41-17 win over the Miami Dolphins last Sunday, being aggressive sometimes pays. 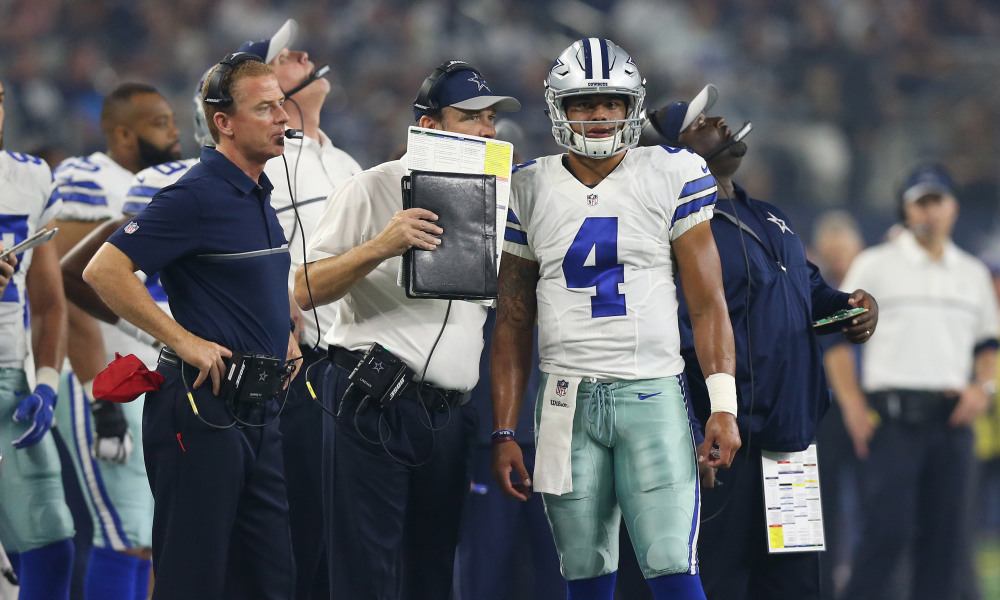 The Cowboys have arguably the best running back in the NFL in Ezekiel Elliott and yet they continue to misuse him. Whether it's turning their backs on their star tailback or over-using him, this offense has a hard time reaching balance. Dak Prescott's strengths could be exploited even more, but this OC refuses to do so.

As hard as it is to make a drastic change in coaching two weeks before the regular season ends, it truly could end up being a great move by the front office. Sure, Amari Cooper has had monster games since joining the Cowboys, but he could be even more dangerous under another coach.

Cowboys versus Colts was a coaching battle between Scott Linehan and former Dallas Cowboys LB coach, Matt Eberflus. It was the matchup of the week, and one we expected to be fun. Instead, we saw one side completely dominate the other. In the NFL, coaching matters. Probably even more than talent on a roster.

The biggest problem would be, who'd take over play-calling?

Since there isn't a promising candidate within the team, the team's only option would probably be letting HC Jason Garrett take over. It may not be ideal, but it could end up being an improvement over Linehan. Of course, it could also let the front office see what Garrett has to offer as a play caller and consider that when deciding how this coaching staff will look like in 2019.

It's unlikely that we see such a thing occur for the Cowboys, but if the offense has another letdown game against the Tampa Bay Buccaneers, I don't see how the front office doesn't at least consider this. They should.

Mauricio Rodriguezhttps://www.facebook.com/PrimeroCowboys/
I love to write, I love football and I love the Dallas Cowboys. I've been rooting for America's team all the way from Mexico ever since I can remember. If you want to talk football, I'm in... You'll find me at @MauNFL.
Previous article
Was Sunday A “Wake Up Call,” Or Were Cowboys Exposed?
Next article
Should Cowboys Claim WR Pharoh Cooper Off Waivers?

I wouldn’t be surprised if the Indianapolis Colts tried to file assault charges against the Dallas Cowboys after the 54-19 beatdown on Sunday night....
Game Notes

Wow, what a great game. The Dallas Cowboys delivered fans with a fun game to watch as the Indianapolis Colts got destroyed 54-19. While...

you sir, are “spot on!” I think you even under sell how bad linehan has been as OC with all the injuries to the O line his lack of ability to accurately gauge and address depth is also clearly a major weakness.He’s been MISS – HIT – MISS with the O line 2nd and 3rd stringers.

Both you guys are spot-on, but the real question is will Jerry do something about it instead of trying to get interviews after every game. It just makes my skin crawl to see Jerry Jones wanting to be interviewed about a football team that he doesn’t coach per se. He’s the only General Manager I can think of / owner of a football team that gets more airtime then the head coach. Go figure!

He needs to go our offense has been crap last two years, his offense is so predictable def just sit on all the routes, and he doesn’t use the players we got properly we need a innovator and someone willing to make adjustments and expand the playbook, really how much worse could the offense look

Look, Linehan’s seat isn’t hot. His seat will only be as hot as Garrett’s, which sadly is cool and comfy. Having said that, the Cowboys braintrust by now knows the QB isn’t very good and has pretty much plateaued. They know there isn’t much wrong with the OC or the playcalling, it’s the guy throwing the ball…or not throwing it. They won’t say it but they know the playcalling is fine because they see the innacruacy, the missed reads, the open receivers not getting notices and the ball-holding sacks with plenty of protection. So no, Linehan’s job is secure for now…and sadly, rightfully so.

And further more, Linehan is the last scapegoat for Dakie Pooh. The Dak-offs have to clamor for the head of someone, anyone but Dakie Pooh. It can never be his fault. It just has be be the playcalling. If only he had some playcalling innovator he would look like the first overall pick in the draft, we just know he would! Yes he would! Dakie Pooh is a big boy, he’s a GOOD QB, yes he is!

Enough with the b.s.. where were you when Tony Choke-go was @ quarterback?

Linehan will be the Cowboys downfall, as this organization will come up short ,once again, in its attempt to win a Super Bowl . 23 seasons and counting……

Matt, I thought I told you to stay off this feed. You’re a hater and Dak is not the problem, its coaching. Even the guys on the big name stations say the same thing. Linehan is very predictable with play calling. Russell Wilson was mediocre his first few years and now has blossoms due to great coaching. Even on a ship the captain can’t do it all himself that’s why you got hand mates, and you should be ashamed of yourself to continue to blame Dak Prescott for overthrowing the ball, holding the ball too long, missing a wide-open guy. Find me a quarterback who hasn’t done that early and often in their career and then I’m on your bandwagon. Until then shut up!