Just how ready the Cowboys 2018 draft class is for their first season is going to have as big of an impact as ever on the outcome of this young team’s season. Making history by drafting the first two players to be selected from inside their new team’s stadium, Linebacker Leighton Vander Esch and Left Guard Connor Williams join the Cowboys at 21 years old. The oldest Cowboys rookie is Quarterback Mike White, 23 years old out of Western Kentucky.

The Cowboys class of nine draft picks features players ranging from day one starters to fringe players already on the roster bubble. Sticking to their merits of targeting big school prospects and drafting well for need while also considering value, parsing the Cowboys rookie haul for the highest upside is no easy task.

The answer may very well be a running back like Bo Scarbrough, who deserved to go before the seventh round as the feature back at Alabama. Scarbrough’s late draft position would likely turn him into a steal on most NFL rosters, but with the Cowboys he has a long way to go to earn this status and find a role alongside Ezekiel Elliott, Rod Smith, and Darius Jackson.

Then there is a quarterback like White, who may also struggle to show his true potential outside of the preseason for the Cowboys. Hopefully not calling upon a third string rookie QB to start the season on short notice once again, White could find himself stuck behind Cooper Rush for the foreseeable future.

When weighing the Cowboys rookies against each other to find the best upside, a certain level of ability to make an immediate impact has to be considered. Evaluating these players still as prospects will also help, removing any positional influence based on the rest of the Cowboys roster. 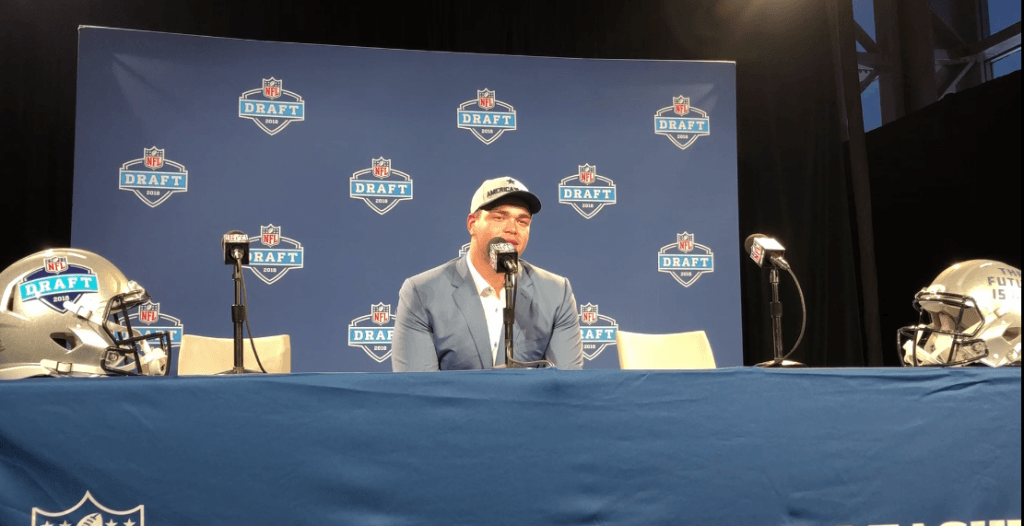 For all of these reasons, Connor Williams has to be the Cowboys pick with the best upside, which is extremely exciting for Cowboys Nation. Sure, Williams will start between Tyron Smith and Travis Frederick for the foreseeable future at left guard, giving him one of the most ideal spots for any young player to enter in the whole league.

Capable of filling in for Smith as a college left tackle, while possessing a similar physical frame, Williams was a lock to be a first round pick a year ago before a season ending injury at Texas.

Falling to 50th overall in position for the Cowboys to grab him, Williams is most importantly with a team that will appreciate every step of his development. Williams’ performance from day one with pads on, approaching quickly in Oxnard, will be a major factor in determining just how dominant the Cowboys running game can be in 2018.

Leaning on Ezekiel Elliott is never a bad game plan, but given the unproven nature of the Cowboys pass catching unit, their dependency on Elliott cannot become a predictable weakness.

Even without Connor Williams in the lineup, the Cowboys have been able to run the ball against suspecting defenses with success. Elliott cutting to the second level untouched against linebackers that want no part of him for four quarters is the football equivalent of Mariano Rivera’s ninth inning cutter ending a game for the Yankees.

You know it’s coming, but aren’t prepared to deal with it, nor good enough. A replacement for Jonathan Cooper was always in the plans for the Cowboys entering this draft. They happened to hit a home run (not off of Rivera) with Williams.

Light enough on his feet to play out in space with an imposing upper body, Williams is the perfect addition to this star-studded Cowboys front. He may very well have more upside than any of the skill players or defenders the Cowboys added at the draft, which isn’t the flashiest of story lines but one the Cowboys can feel great about.

The Cowboys love the athlete they have in 19th overall pick Leighton Vander Esch, and if you followed my draft coverage from Dallas you know how excited I am for Wide Receiver Michael Gallup to earn a potential starting role. Having also written fondly about Defensive End Dorance Armstrong and Tight End Dalton Schultz’s ability, the anticipation for Connor Williams completing the Cowboys revamp on the offensive line will be worth the wait and special to watch for years to come.

Tell us what you think about “Which Dallas Cowboys Rookie Has the Highest Upside?” in the comments below. You can also email me at Sean.Martin@InsideTheStar.com, or Tweet to me at @SeanMartinNFL!