Newly signed linebacker Anthony Barr made his practice debut on Wednesday. Barr passed his physical and was activated off the physically unable to perform list, which he was placed on two days after he signed a one-year $2M base value contract with the Cowboys on August 3.

Cowboys head coach Mike McCarthy gave an update Tuesday, noting that they would try to provide him with reps in some way yesterday. “My hope is to at least get him on the field for individual on Wednesday,” he said. The Cowboys had a joint practice with the Chargers, who they will face Saturday in their second preseason game.

Barr was spotted participating in individual drills with Leighton Vander Esch, allowing Micah Parsons to line up at the edge. Chargers running back Austin Ekeler also beat him deep on a route, but let's face it, Barr has not seen much action in several months, and of course, that should not happen in a real game anyway. It is still unclear if Barr will get any live snaps this weekend; it looks like he still needs to get up to speed again.

Clarence Hill Jr on Twitter: “Anthony Barr lined up with Leighton Vander Esch. This is an option with Micah Parsons at edge#DallasCowboys pic.twitter.com/EIjjSqshPP / Twitter”

Anthony Barr lined up with Leighton Vander Esch. This is an option with Micah Parsons at edge#DallasCowboys pic.twitter.com/EIjjSqshPP

Barr brings veteran depth to the LB position. He dealt with multiple injuries in his final season with the Vikings a year ago but was still able to play 11 games. It is nice that he got some work on Wednesday, and Dan Quinn can start to get an idea of what he has as they roll into September.

Vander Esch recently spoke about how excited and what the veteran can bring. “With his knowledge and what he brings, he's obviously a vet and he's got a few years on me, so there's things I can learn from him,” he said.

I am looking forward to the defense's strength this season and see how they can use Parsons with a touch more depth at the LB position. 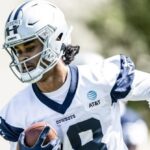 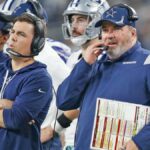