Blake Jarwin Ready to “Run It Back” With Dak Prescott

The Dallas Cowboys had an injury-riddled 2020 campaign, especially on the offensive side of the ball. Two of the biggest components of the Cowboys passing game, Blake Jarwin and Dak Prescott, got hit with the injury bug early in the season. The former tore his ACL in the season opener, and the latter suffered a season-ending ankle injury in Week 5.

Prescott is the talk of the organization these days as the third round of negotiations with the Cowboys on a long-term contract are underway. A second franchise tag is expected to allow more time to work out a lucrative extension before the July 15 deadline.

Jarwin caused a frenzy via his Instagram account on Friday. The Cowboy's top tight end posted a photo of himself and Prescott, expressing that he's ready to “Run It Back” with his quarterback in 2021. 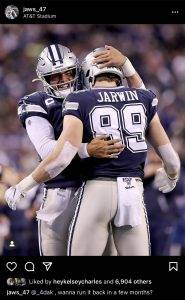 Shortly after Jarwin let his feelings be known, Prescott responded by posting the photo via his Instagram story, and his answer was exactly what Cowboys fans wanted to hear. 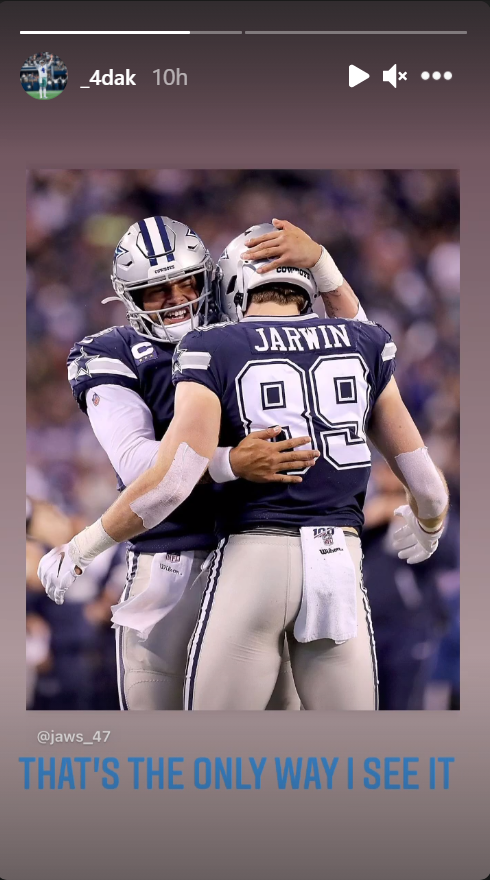 This duo's chemistry started back at the end of the 2018 season. In the season finale against the New York Giants, Jarwin caught seven passes for 119 yards and three touchdowns, setting the stage for a breakout 2019 season, so everyone thought. Unfortunately for Jarwin, he spent that season behind recently retired Jason Witten, who came back to the organization after a year in the broadcast booth with ESPN.

Jarwin isn't the only one excited for Prescott's return. CeeDee Lamb and Dalton Schultz also commented on the photo stating their excitement about getting their quarterback back under center.

The Cowboys recently released a hype video for the 2021 season after Super Bowl LV. Noticeably absent in the package was Prescott, which caused an outrage among his most avid supporters. Even his older brother, Tad Prescott, was perplexed that Dak wasn't included.

This was a very positive sign as talks are expected to intensify between Prescott and the Cowboys before the March 9 deadline to apply the franchise tag.