Recently, the Dallas Cowboys released Wide Receiver Allen Hurns. The roster move didn’t come as much of a surprise considering the team saved five million dollars in cap space for a WR that wasn’t going to get a ton of playing time in 2019. The Cowboys starters at the position will very likely be Amari Cooper, Michael Gallup and Randall Cobb. But Hurns wasn’t competing with these guys. Instead, the guys that cost him the job were the younger guys in the WR room.

As seems to be the case every year, the Cowboys have a handful of young, talented wide receivers fighting for the final spots to make the 53-man roster. Names like Lance Lenoir make enough noise in training camp and preseason to make us wonder about their chances of making the team.

This year, that’s precisely what’s happening among a group of talented guys. Undrafted rookies Jon’Vea Johnson and Jalen Guyton turned heads in the offseason and could be in serious contention to make the roster. A forgotten name by many, Cedrick Wilson should also be in the discussion after missing his opportunity due to injury a year ago. 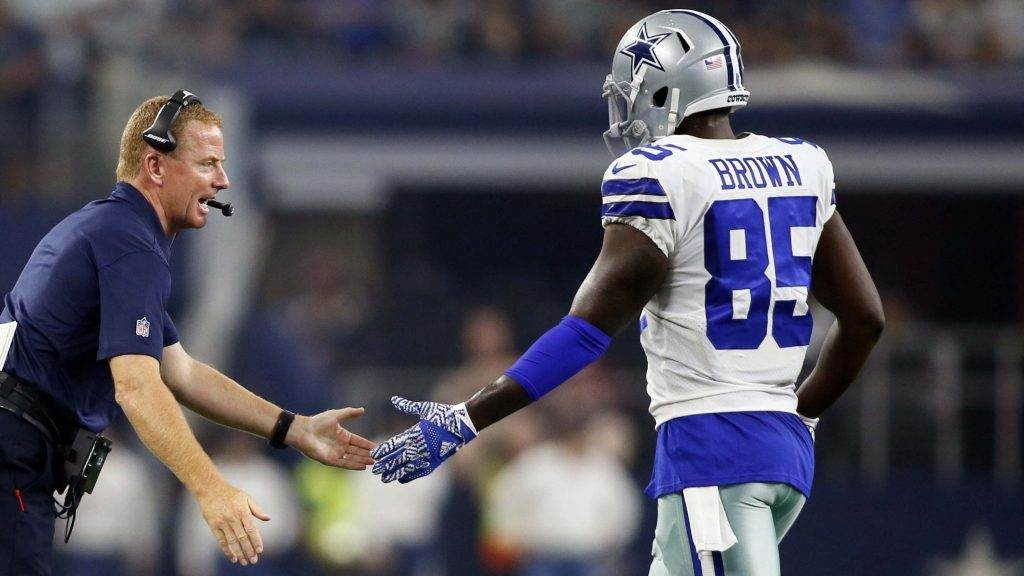 Thanks to the noise made by these guys, many in Cowboys Nation are underestimating Noah Brown’s chances of being part of this team in the upcoming season.

Since they drafted him in the seventh round of the 2017 NFL Draft, the Cowboys have kept Brown around. Even in 2018 when they sent him to Injured Reserve, they brought him back in November to finish the season. We know very well that the Cowboys aren’t afraid of cutting late round draft picks. Even still, the team hasn’t done so with Brown yet. They clearly like what they see in him.

Back when he was a prospect out of Ohio State, he was seen by many as a player with plenty of potential who could be developed into a serious weapon on offense down the road. He was never expected to have a major impact as a rookie or even during his second rodeo in the NFL. This might turn out to be his best season yet. Personally, I’d be surprised if the team lets him go this year.

Brown’s career numbers seem very irrelevant with only nine catches for a grand total of 87 yards. But that’s not the whole story. Last year, despite only catching five passes on eight targets, Brown was in for 102 snaps in eight games. It’s worth mentioning this was on the second half of the season, when team already had a #1 wide receiver in Amari Cooper. Brown has been a great blocker for the team.

He’s also proved to be an important player on special teams. Last season he played on more than 60% of the special teams snaps in seven of his eight games played.

Although I believe he isn’t a lock to make the 53-man roster, I’d definitely bet on him over guys like Johnson and Guyton. Heck, even Wilson, who I’d love to see make the team.

Hurting Brown’s stock is a recent report from Mike Fisher saying the WR will start training camp on the short-term PUP list.

As the Cowboys get ready to report to training camp, brace yourself for an all-out battle at the wide receiver position. And while you should be getting excited for the other guys, don’t sleep on Noah Brown.

Tell me what you think about “Cowboys 53-Man Roster: Are We Underestimating WR Noah Brown’s Chances?” in the comments below, or tweet me @MauNFL and let’s talk football! If you like football and are looking for a Dallas Cowboys show in Spanish, don’t miss my weekly Facebook Live! show, Primero Cowboys!