After going through the new-look Cowboys defense by position ahead of next week's start of training camp, this series shifts to an offense looking to get healthy for 2021. Starting with the QBs, all eyes are of course on Dak Prescott – an early favorite for Comeback Player of the Year.

The Cowboys learned what they have behind Prescott in Garrett Gilbert and Ben DiNucci for just two starts in 2020, with the rest of their backup play coming from Andy Dalton. With Dalton now on the Bears, perhaps the Cowboys biggest takeaway from games started by anyone other than Prescott is the strength of their WRs and OL depth.

Quarterbacks Coach Doug Nussmeier will once again lead this group into the season, his second in this position after being hired to Jason Garrett's staff as TE Coach in 2018.

Getting to Know Doug Nussmeier

Being with the Cowboys since 2018, Dallas is Nussmeier's longest stop in the NFL after just two seasons with the Rams in 2006-07. Serving as QB coach under then-HC Scott Linehan, Nussmeier rejoined Linehan with the Cowboys. Now, he'll work with another offensive coordinator/former QB in Kellen Moore.

Nussmeier has worked with college coaches like Steve Sarkisian, Nick Saban, and Jim McElwain. Understanding how to put their best players in favorable matchups is what these coaches excel at, which made Nussmeier a good fit for a TE heavy offense under Linehan and Garrett.

The advantage the Cowboys can create at WR and a healthy dual-threat QB in Prescott is a dream for any offensive staff, and by all accounts Nussmeier has fit in fine with Moore leading the Cowboys offense.

It was Garrett Gilbert that perhaps showed the most promise in backup duty last season, making him a developmental player for Nussmeier to work with at QB2.

Dak Prescott, Garrett Gilbert, and Ben DiNucci are all returners for the Cowboys at QB. So much has already been said about the expectations for Prescott's return, on pace for his highest passing yard output while setting a new career best 8.4 yards per attempt through five games with Amari Cooper, Michael Gallup, and CeeDee Lamb in the lineup.

Prescott's five starts included a season-opening Sunday Night Football loss in LA to the Rams, a game ending in some controversy after a late throw to Gallup was brought back on offensive pass interference, as well as shootout losses to the Seahawks and Browns. He did lead an improbable comeback against the Falcons in week two and did just enough against the Giants pre-injury for Dallas to hold on 37-34 in week five. 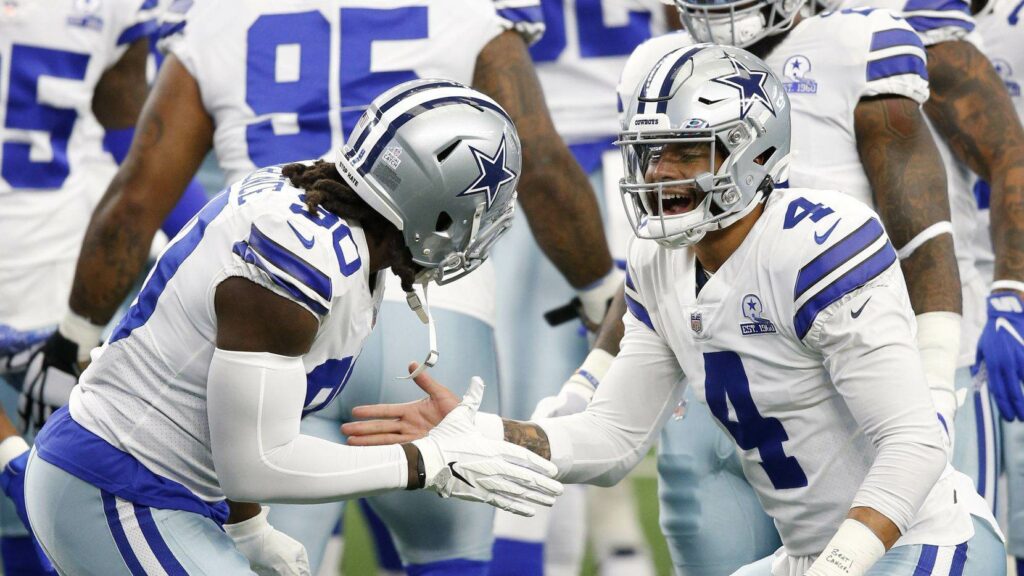 Whether or not these point outputs can lead to Cowboys wins in 2021 remains to be seen thanks to more changes on defense, but the stars are aligned for Prescott to put up some Madden like numbers. He'll not only have his full cast of weapons but be playing behind Tyron Smith at LT and La'el Collins at RT again, two additional injuries that affected the Cowboys backup QB play greatly.

The week after Prescott's injury, the Cowboys were embarrassed on Monday Night Football against the Cardinals, and followed it up with a 25-3 road loss at Washington.

Week 8 was the Ben DiNucci game, as the UDFA dropped back to pass 40 times in a game at the Eagles the Cowboys would lose 23-9. On the heels of their closest loss in three weeks, the Cowboys switched to Garrett Gilbert at home against the Steelers and nearly handed Pittsburgh their first loss. Gilbert showed promise completing 21 of 38 passes for 243 yards and a touchdown to Lamb.

Gilbert is likely the Cowboys best bet to develop a consistent backup to Prescott, though throwing DiNucci into the fire for a primetime road start was hardly the best way to evaluate what they have in the James Madison product. Both QBs will compete against each other for the backup position, but also with a newcomer that brings past experience with the Cowboys in Cooper Rush.

Cooper Rush spent 2020 reunited with Jason Garrett and the Giants. It was Garrett that brought Rush in as a UDFA in 2017, where his strong preseason gave the Cowboys depth behind Prescott along with Kellen Moore.

Spending the season on the Giants' practice squad, Rush will now work with Moore as his OC and look to push either DiNucci or Gilbert for a roster spot. Where these passers have more potential as players that can make an unscripted throw or hit a tight window, Rush is more of a steady passer without the top-end arm strength. Should he be forced into regular season action, the Cowboys may feel their best chance to simply get the ball in the hands of their playmakers lies with Rush. 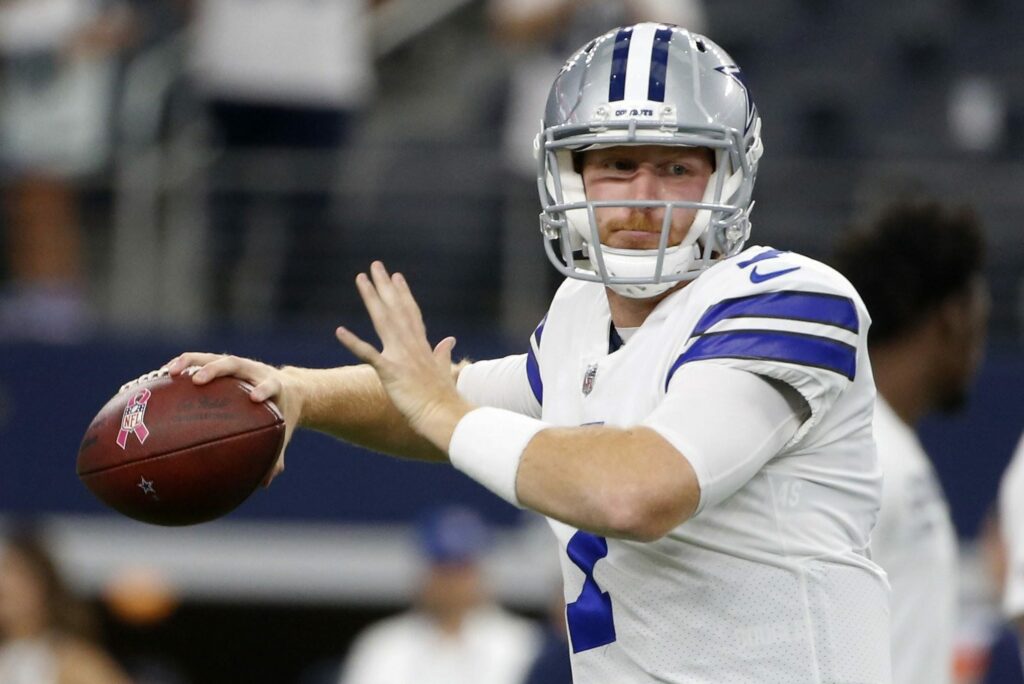 From Staff Writer Jess Haynie's series on the Cowboys improvements/downgrades across the roster for 2021:

Sure, Gilbert looked okay that one day against Pittsburgh. But it helped perception that DiNucci had set the bar very low the week before, plus we caught the Steelers just as they were going off a cliff. It also helped him that Dalton returned and allowed Garrett to rest on those one-game laurels.

Right now, the reasonable argument is that losing Andy Dalton and not replacing him with a comparable veteran talent is a detriment to the Cowboys. There’s always a chance that one of the current prospects or a yet-seen addition could change that, but Dalton’s left a void of experience and confidence at backup QB which can’t be ignored.

Watching Dalton keep the Cowboys offense at a respectable level offers little more than the hope Prescott can take this team far in 2021. To do so, he'll of course have to stay healthy, and if even for a few games the Cowboys have to rely on DiNucci or Gilbert it could greatly hurt their playoff chances.

The Dallas Cowboys are back in Frisco for training camp from The Star, but their ongoing season of Hard Knocks resumed tonight with highlights from practices...
Read more
Cowboys News

Amari Cooper, Malik Hooker Return to Practice at The Star

The Dallas Cowboys were welcomed by a large home crowd to their first practice at The Star on Monday, with WR Amari Cooper and...
Read more
Cowboys News

In a training camp where the defense carried most of the question marks, the story shifted to Quarterback Dak Prescott when he injured his...
Read more

That is hilarious, you have to be kidding. DP led us to an “improbable comeback” against Falcons??? The pathetic, bumbling Falcons handed us that game, watching that onside kick rolling around for 3 minutes. And he was stumped by the Giants, THE GIANTS, and was bailed out by Andy Dalton, who really won that game.

We don’t have good backup right now. Gilbert looked good for they one game, but his whole resume is not encouraging, bouncing around the league. Rush is STILL an unknown after years in the league and DiNucci looked pretty bad in his one appearance.

Look,. DP is set up. O-line healthy, EE in his “best shape”, WRs highly rated, and D should be better with infusion of highly defensive biased draftees and FAs.

Should be no more excuses, right???