The Dallas Cowboys are on the field for their first training camp practice in Oxnard, and we conclude our camp preview series with a position group that may be the best in the NFL. The Cowboys trio of receivers with Amari Cooper, Michael Gallup, and CeeDee Lamb will jump right back into working with QB Dak Prescott – a full participant at the start of camp.

Dreams of a 1,000 yard season from all three receivers were put on hold in 2020 when Prescott went down, but the production the Cowboys did get at WR along with the scheming by Kellen Moore provides plenty of hope for 2021.

Adam Henry is in his second season coaching the Cowboys wideouts, a room that features not only three set-in-stone starters but an intriguing class of UDFAs starting their fight for roster spots in Oxnard this week.

Getting to know Adam Henry

Henry's first dip into the NFL came back in 2007, joining the Oakland Raiders from McNeese State. He didn't transition to coaching WRs until rejoining the college ranks at LSU in 2012, where he worked with Jarvis Landry and Odell Beckham Jr.

After a year with the 49ers in 2015, Henry would rejoin Beckham with the Giants as their WR coach for two seasons. He then left for Cleveland in 2018, where Landry and Beckham were reunited. Whether or not Henry made Beckham and Landry the receivers they are, or the LSU products created Henry's path to the NFL, is perhaps a moot point considering the talent level he now has to work with in Dallas.

Along with Cooper, Gallup, and Lamb, the Cowboys bring back Cedrick Wilson, Noah Brown, Malik Turner, and Aaron Parker to round out the depth chart at WR.

In four full games with Prescott, the Cowboys targeted Cooper 51 times, Gallup 24 times, and the rookie Lamb 29 times. The trio put up 985 yards and four touchdowns during this stretch. All of them were on pace for at least 1,100 yards, with only Cooper finishing above 1,000 yards once Andy Dalton, Ben DiNucci, and Garrett Gilbert were inserted at QB. 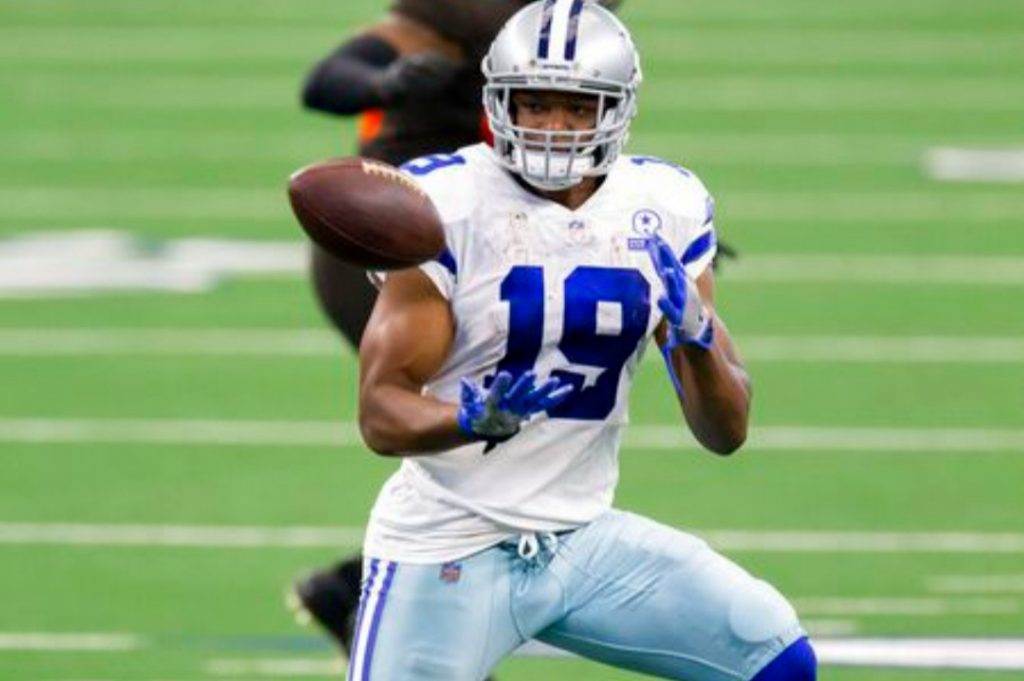 That Cooper remained productive despite playing in a limited offense with injuries all around cements his status as the team's WR1. Opposing defenses prepared for the 2021 Cowboys minus Prescott knowing they needed to take away Cooper, and still struggled to do so. This bodes incredibly well for not only Cooper in 2021, but Gallup and Lamb in prime position to take advantage of secondary coverage.

Cooper's yards per catch actually increased following week five. The Cowboys ability to dial up big plays for Gallup and Lamb was hindered by their OL injuries and QB play. Gallup dropped from 21.15 yards a catch to 14.29 for the season, with Lamb only falling from 14.71 to 12.64. For reference, Packers WR Marquez Valdes-Scantling led the league in this category with 20.4 yards per catch in 2020.

Gallup's best plays seem to come as unscripted and contested throws, excelling as a bad ball catcher that can go up and get it. The same can be said about Lamb, though entering his second season he should see plenty of play calls his way. Getting Lamb the ball in space and on the move should be a priority for the Cowboys offense.

With the amount of turnover in the NFL from year to year, there's few position groups that teams can feel good about simply running it back. Receiver is a major exception this year for the Cowboys, as all of the weapons are at Prescott's disposal for this offense to be among the league's best. 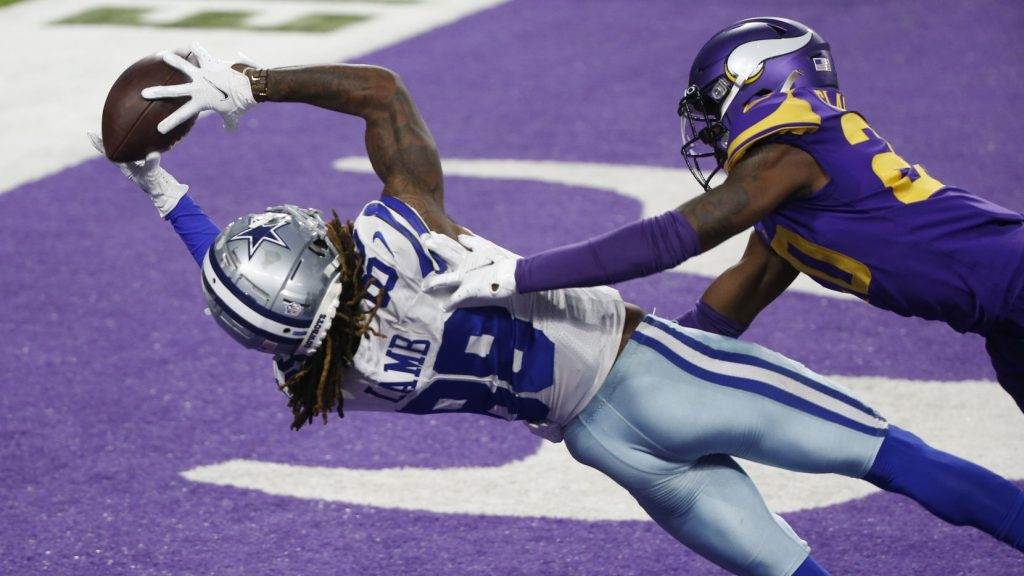 Even Cedrick Wilson showed promise as a returner for 2021, catching 17 passes for two touchdowns and 235 total yards. Wilson and Brown won't face much outside competition to be depth players behind the “big three”.

Turner was a special teams addition from a year ago under Jon Fassel, tasked with turning around a struggling Cowboys ST unit in his first season as coordinator. Turner appeared in six games and played at least half of the team's ST snaps in three of them.

Parker is a 2020 UDFA out of Rhode Island that did not see any playing time. The conference leader in receptions and yards in his final college season, Parker will get another chance to stick with the Cowboys.

Like offensive line, the other position previewed here at the start of camp, receiver is a hard position for outsiders to make this Cowboys roster. The chance to play on special teams may help some players, but Fassel returns most of his key players here as well.

Fifth round pick Simi Fehoko is the most notable newcomer at WR for the Cowboys. He's joined by UDFAs Osiris Mitchell from Mississippi State, Brennan Eagles from Texas, Brandon Smith from Iowa, and TJ Vasher from Texas Tech.

Reggie Davis is a FA addition and a former member of the Cowboys practice squad, though he spent 2020 on the Bears practice squad. The same is true of Johnnie Dixon, who has spent time with the Texans and Cardinals since joining the league in 2019 out of Ohio State.

Fehoko has quickly become a fan-favorite prospect to watch through camp and the preseason. The Stanford product has the size to match up with NFL defenders, but didn't always show a great ability to separate at Stanford. This didn't stop him from being productive, making plays in traffic and putting the ball away quickly to gain yards after the catch. 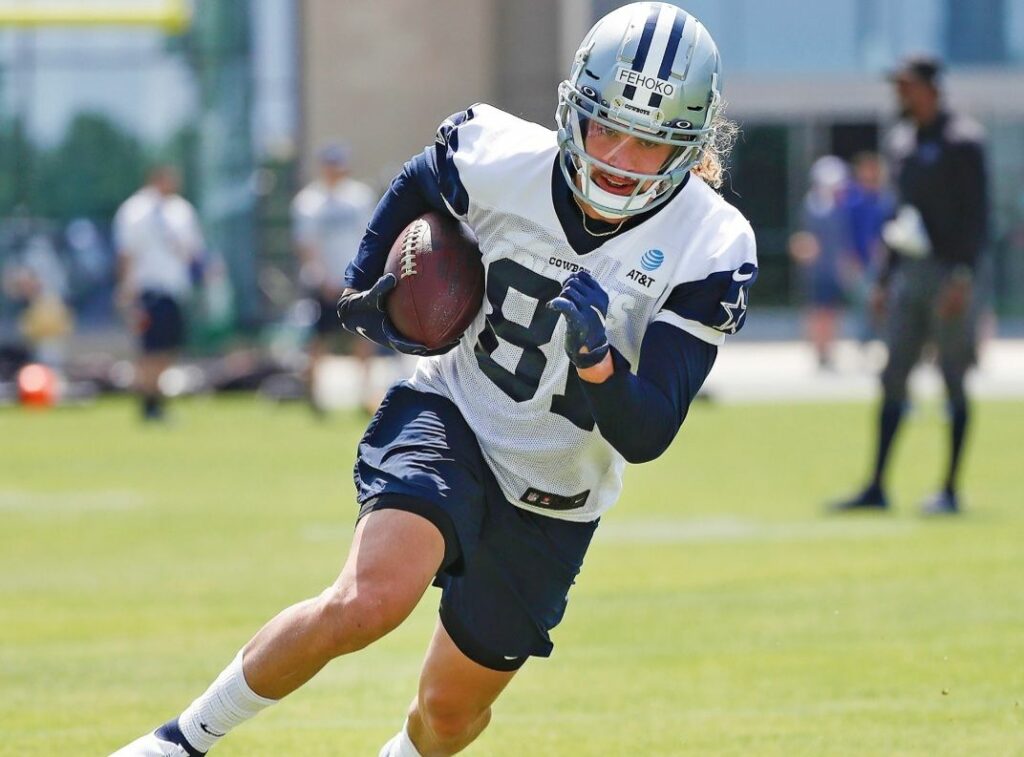 If Fehoko's competition for reps in the slot becomes Lamb and Wilson, he could be in for a difficult first camp in Dallas. He has the flexibility to line up outside the numbers, as does Lamb, making Fehoko's best shot at playing time potentially pushing Wilson for these inside reps.

Of the UDFA class, Eagles and Smith are the most intriguing prospects. Eagles is a player that was schemed touches in numerous ways at Texas, offering some more creativity for Moore to use in the passing game. Smith's athletic profile makes him a player worth developing, should the Cowboys be able to hold onto him as a down roster or practice squad member.

With the Cowboys appearing on Hard Knocks, and WR being the strength of the team, these roster longshots may get some screen time and recognition as they fight for limited roster spots. Gallup, Wilson, and Brown will all be playing in contract years, meaning the Cowboys will have to give at least some thought to their long-term future at WR beyond Cooper and Lamb.

I expect them to keep six receivers total this year, but if they only go with five then we can almost guarantee Fehoko will be one of them.

The rest of the new faces are mostly undrafted rookies with only an outside chance at making the roster. Also in the mix is Stephen Guidry, a well-liked UDFA last year who opted out in 2020 due to COVID-19.

If Fehoko gives the Cowboys anything at all, even if it's just as a favorite target for the backup QBs fighting to make this team, then Dallas can't be anything other than neutral at WR from a year ago. I agree with Jess that this is an improved group, ready to help prove that Prescott was worth his lucrative new contract.

This concludes the Cowboys training camp preview series. With the team on the field in Oxnard, look for much more news and analysis as the preseason quickly approaches.

There have been many question marks surrounding the Cowboys' choice to thrust CeeDee Lamb into the number one receiver spot, but the 23-year-old has...
Read more
Game Notes

Off their first victory of the season, the Dallas Cowboys (1-1) look to keep on rolling with momentum in Week Three, as they will...
Read more

WR position is the deepest and most talented on this team.