The Dallas Cowboys defense came into yesterday's game against the Green Bay Packers coming off back to back stellar defensive performances. Two weeks prior they held the Miami Dolphins to only 6 points on a pair field goals and followed it up with only allowing the New Orleans Saints to kick four themselves. Having not given up a touchdown in two weeks, the Cowboys moved up to fourth in fewest points and seventh in total defense.

Based on this unit's past history against Aaron Rodgers, they definitely wanted to keep that momentum going on their own home field.

The start of the game was perfect for the defense with a quick three and out, which is just what you would want facing a quarterback like Rodgers. They would see the field again shortly, though, as Dak Prescott was intercepted by Jaire Alexander deep in Packers territory. After returning the interception just past midfield, the Packers went 47 yards in under 90 seconds as Aaron Jones scored on an 18-yard run, putting them up 7-0.

The Cowboy's next possession stalled after six plays but they ended up pinning the Packers deep in their own territory. It wouldn't matter, though, as Rodgers and the offense marched 89 yards in 9 plays in about five and half minutes as Jones scored his second touchdown of the day and put the Packers up 14-0.

The Cowboys had a potential scoring drive going to start the second quarter until Prescott threw his second interception of the game to Chandon Sullivan. They only gave up a field goal for the rest of the half but found themselves down three scores at 17-0.

The Packers scored on their first two possessions of the second half to take a commanding 31-3 lead, only to have Michael Gallup and Ezekiel Elliott answer with touchdowns of their own to cut the lead to 14 at the beginning of the fourth quarter. After forcing a punt, Prescott would throw his third interception of the game to Kevin King who returned it deep in Cowboys territory to the 29, giving Rodgers a short field. The Cowboys defense only allowed nine yards on the next series, but their old nemesis Mason Crosby nailed a 38-yard field goal to put the Packers up 17 with just over eight minutes left.

Amari Cooper would add a touchdown just 21 seconds later to give the Cowboys some hope, but unfortunately, Brett Maher missed a 33-yard field goal with 1:44 left that would've cut the lead to seven and set up an onside kick attempt that could potentially force overtime if recovered.

In the end, Aaron Jones had a career day with 182 all-purpose yards (107 rushing, 75 receiving) and four rushing touchdowns, becoming the first Packers running back to do so since Dorsey Levens in 1999, and the first Cowboys opponent to ever rush for that many in a single game in team history.

Do you know how you can lose a game in which you hold Aaron Rodgers to zero touchdowns? It's simple, turnovers.

In the NFL if you turn the ball over you aren't going to win ball games, especially when you lose the turnover battle 3-0 like the Cowboys did yesterday. You simply can't keep putting your defense on a short field with a quarterback like Rodgers; eventually, points are going to be produced.

For the second straight game, the Cowboys offense hasn't helped the defensive unit. Last week, it was a lack of points, this week, it was turnovers. Now, the Cowboys get ready to hit Metlife Stadium to take on the New York Jets who don't exactly have what you would call an explosive offense. They'll have an opportunity to bounce back and hopefully, the offense matches its efforts. 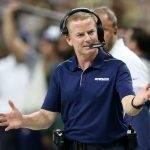 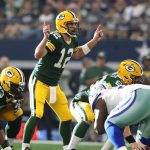