One of the most exciting moments NFL fans wait for during the Draft process is NFL Network Draft Analyst Mike Mayock's Mock Draft. Widely recognized as one of the best in the business, he only presents one simulation per year and usually presents what many consider “hot takes.” Someone like Mayock tends to have pretty good “insider” information and gives the Draft community things to think about hours before the event.

For instance, this time around he has QB Josh Rosen falling all the way to the 15th overall pick and  C Frank Ragnow in the first round to the Bengals (something basically no one was talking about).

Of course, the NFL Draft will forever be unpredictable and most Mock Drafts will be thrown away usually after the second or third pick. It's just the way it works. Every year, media members give it their best shot, knowing deep down they'll be wrong come Draft Day.

Heck, Mike Mayock was right in only five picks last year! Even still, these are great exercises to get to know the prospects and the teams' most pressing needs.

Having said that, the Dallas Cowboys pick in Mayock's 2018 Mock Draft sure was a surprise.

With the 19th pick the @dallascowboys draft a replacement for Dez Bryant?@MikeMayock has @SuttonCourtland heading to Big D

The player himself isn't really that much of a surprise. People have been mocking Courtland Sutton at 19 for Dallas many times over the past month. What was surprising about the pick was the fact that many other talented prospects were still on the board.

Boston College DE Harold Landry may find his way into the top 15 despite being injured most of his last season in college football. However, in this mock, Mayock has him sliding all the way to the Detroit Lions at 20.

The Cowboys don't need a DE urgently, but if Landry is there, they need to consider adding a promising RDE to have one of the best defensive lines in the country with Lawrence and Irving. But okay, it won't be as shocking simply because it isn't that big of a need. D-Law just had a breakout season and Taco Charlton may progress into a quality starting RDE after a season of experience. 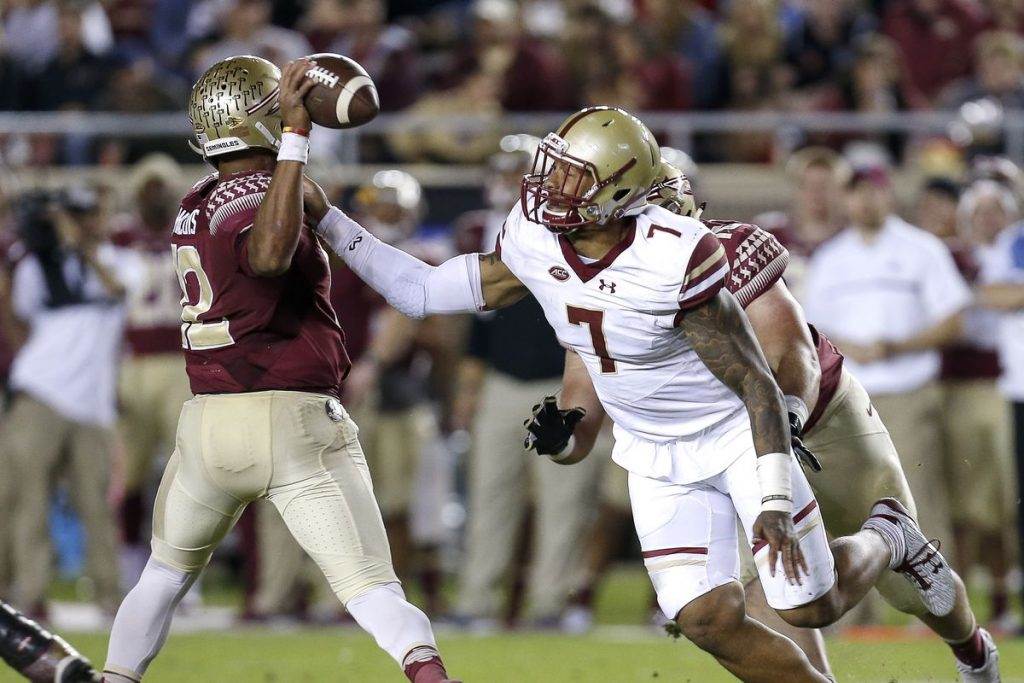 Passing on Calvin Ridley to take Courtland Sutton is the most surprising thing for me in this mock. I mean, if it's between DJ Moore and Sutton, I won't be surprised at all to see the SMU product be the pick, but Ridley at 19 is amazing value.

He naturally gets open, he's an amazing route runner and out of every receiver available, he'll be the most ready and will make the most impact from week 1. The guy would provide Dak Prescott a potential best-friend for years to come.

Sutton, on the other hand, will take some time to fully develop, perhaps a season or more.  I think this offense needs a guy who can ball out as soon as possible. This is a contending team. It's time to add players who will create a big impact since 2018. I have trouble believing Sutton is that guy.

However, Mike Mayock could be right on with his prediction. The Cowboys have shown a tremendous amount of interest on Sutton and (depending on who's still on the board) would be anything but a surprise if he's the name in the card the Cowboys send for the Commissioner to read.

Mauricio Rodriguezhttps://www.facebook.com/PrimeroCowboys/
I love to write, I love football and I love the Dallas Cowboys. I've been rooting for America's team all the way from Mexico ever since I can remember. If you want to talk football, I'm in... You'll find me at @MauNFL.
Previous articleCowboys 2018 Draft Needs: Safety
Next article2018 NFL Draft: Final Draft Board

Most of the 2018 NFL Draft class is heading into their fourth seasons, and for most of those the final year of their original...
Read more